This Sunday 216 new cases were added and 15 people died

Sinaloa.- Covid-19 infections continue to decline in Sinaloa when 216 new cases were registered this Sunday, thus registering 68,147 so far in the pandemic, deaths are also already giving a truce, with 15 deaths in 24 hours, which gives a total of 7,954, in more than a year and five months.

According to the report issued daily by the Ministry of Health, this Sunday there were 27 fewer cases than on Saturday.

Of the 15 new deaths reported in the last 24 hours – from 45 to 96 years – six from Culiacán, three from Mazatlán, two from Ahome, two from Guasave and two from Navolato. 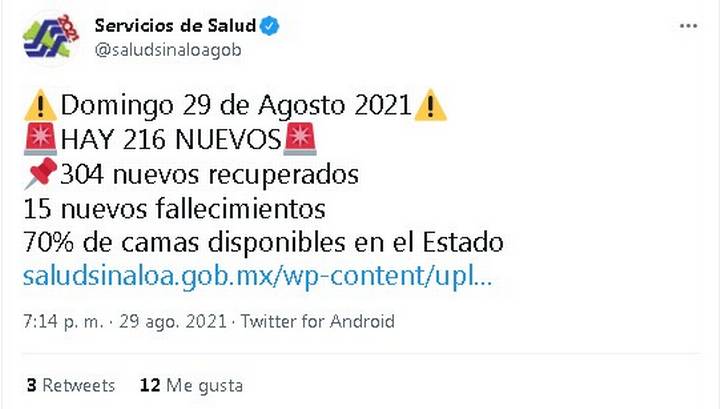 Of the 304 recovered patients, 104 correspond to Culiacán, 72 to Ahome, 43 to Guasave, 21 to Mazatlán, 16 to Elota, nine to Badiraguato, eight to Escuinapa, eight to Navolato, six to Cosalá, five to El Fuerte, three to Choix , three to Salvador Alvarado, three to Mocorito and three to Sinaloa.

The epidemiological traffic light in effect throughout the state is yellow and 70 percent of Covid beds are available in Sinaloa.