According to the National Water Commission, “Willa” could touch land causing possible destruction in the central and southern areas of Sinaloa.

Tropical storm “Willa” evolved into category 1 hurricane on the Saffir-Simpson scale and is located southwest of the coasts of Colima, reported the National Meteorological Service (SMN).

The phenomenon will maintain the potential for very strong and intense storms in Sinaloa, Michoacán, Nayarit, Jalisco, Colima, and Guerrero. 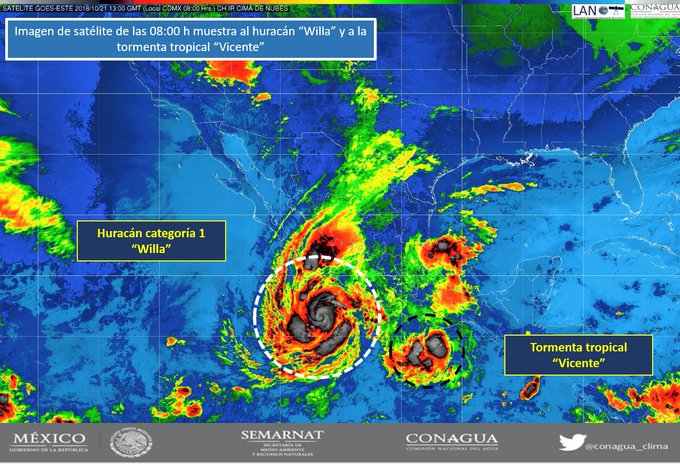 Popular Stories Right now
Sinaloa will color 17 communities and stately towns
Mazatlan mayor responds to developer Carlos Rivera Vega: “We will not allow blackmail!”
Casa Club del Muralla finally closes its doors in Mazatlan
The natural phenomenon registers sustained winds of 140 kilometers per hour and gusts exceeding 165 kilometers per hour, with a displacement towards the northwest at 11 kilometers per hour.

The SMN provides waves of one to two meters, with possible formation of waterspouts off the coast of Jalisco, Colima and Michoacan.

Therefore, he recommended to the population extreme precautions in the areas of the states mentioned for rain, wind, and waves (including maritime navigation) and meet the recommendations issued by the authorities of the National System of Civil Protection, in each entity.