Due to increases in infections, the state goes to a yellow epidemiological traffic light, but it could be in orange or beyond: Cuen Ojeda

Sinaloa.- The Secretary of Health, Héctor Melesio Cuén Ojeda, reported that the federation sent the notification for Sinaloa to pass a yellow epidemic risk traffic light, due to increases in infections by Covid-19.

” In effect, we changed to yellow at the semaphore for epidemiological monitoring and this is because the transmissibility has increased, however, according to what is happening in Sinaloa, we could go to orange or beyond, ” said Melesio Cuen.

The Secretary of Health mentioned that healthy distance is essential and while returning to the green light, do not attend meetings with crowds of people.

The epidemiological yellow light will be from next January 10 until January 23, according to the secretary of health in Sinaloa. 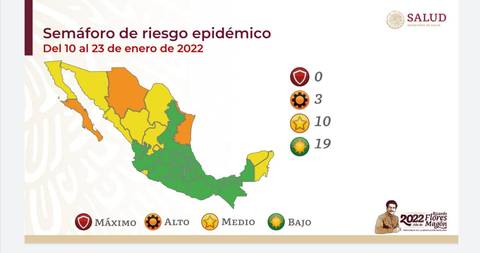 The population is invited to continue to observe the prevention protocols and keep a healthy distance.

The year 2022 arrived and brought with it the fourth wave of COVID-19 to the State.

During the last days of December, there was a slight increase in infections referenced to the Sinaloa Ministry of Health, however, this rise was more visible at the beginning of January, since from January 03 to 06 the cases have rebounded exceeding the 300 daily. As seen in previous waves of infections.

The municipalities that top the list with the most infected people are Culiacán, Mazatlán and Ahome . While, on the other hand, San Ignacio, Choix and Concordia are the municipalities with the least accumulated infections since February 28, 2020, when the first case of COVID-19 was presented in Sinaloa, until January 6, 2022

According to the Secretary of Health in Sinaloa, Héctor Melesio Cuén Ojeda, the national figures presented on January 6, 2022 are the second highest since the start of the pandemic to date.

Due to this increase, municipal and state authorities have found it necessary to take measures such as the following:

But, there were also certain actions that were disqualified by society, such as the massive party to receive the year organized by the Mazatlán City Council, the crowding of people at the fair known as “La Verbena” in Culiacán and the excess capacity in the baseball game in Guasave.

Regarding the figures presented, it is worth mentioning that they are those registered by the Ministry of Health and its owner, Héctor Melesio Cuén Ojeda said that there may be an under-registration since not all State laboratories report their information to the Ministry, therefore Therefore, the number of infections may be higher.

On the other hand, a new variant of COVID-19 called Ómicron has also arrived at the entity, which joins other variants such as Delta.

Given this, the World Health Organization (WHO) stressed that this new variant should not be classified as “mild”, because it also kills people and because it is more contagious, it saturates hospitals.

It is worth mentioning that of the 1,570 beds that Sinaloa has to care for patients with COVID-19, only 5 percent are being used, that is, only 75 are occupied. Therefore, despite the increase in infections and the new variant, there is good hospital availability.

Map of coronavirus in Mexico

128,929 active cases are estimated in the country.

Municipalities with the most active cases

Chiapas is the entity with the lowest number, accounting for 158; Tlaxcala estimates 292, in Campeche, there are 380, in Michoacán, there are 639 active cases, and 799 in Oaxaca.

COVID traffic light in Mexico by states: this is how the map looks from January 24 to February 6, 2022