Since he was 10 years old, Azael has come to the port to sell plums, this tropical fruit that has already become a tradition in the town of Agua Caliente de Garate, Concordia

Mazatlán, Sinaloa.- From Agua Caliente de Garate, Concordia, Azael Ortega Medina comes to the port every year to sell plums. This tropical fruit is already a representative of this community, hence many have dubbed it ” the land of the plum .”

The season begins at the end of May, continues until mid-June, and means, for those who harvest and sell this sweet fruit, the opportunity to generate income, as is the case of Azael, who since he was 10 years old came to Mazatlán to market the plum. 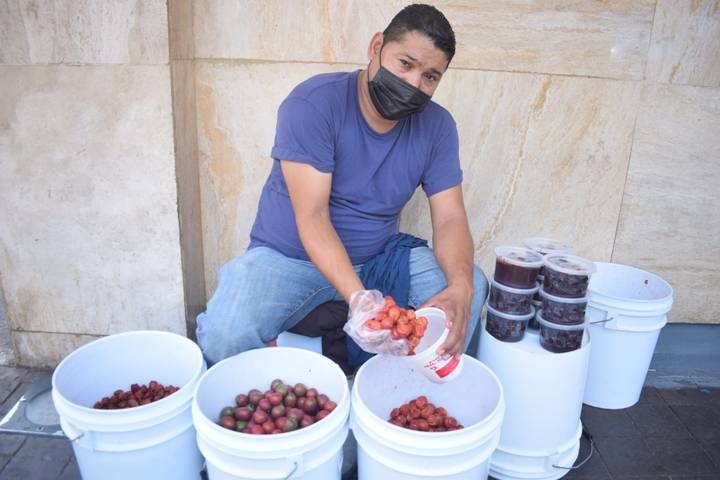 The harvest was started by his father, offering between the colonies; During the last 28 years, Ortega Medina has made his clientele in the port, he is located on the corner of Benito Juárez and José María Canizález streets, in the Center on the outskirts of a well-known department store.

Every day he brings up to seven buckets full of plums, whether fresh, cooked, dried, honey, or enchiladas, at the end of his day he returns home with them empty; all are sold to him. Prices range from 30 to 50 pesos, although it also sells what the customer asks for.

To prepare aguafrescas, atole, sauce or simply to eat with chili and lemon, these are the ways in which customers consume them, also for their properties, as a laxative, as they help in the digestion process.

Although it is in high demand, every year the production is less. There are many factors that contribute to its scarcity, such as drought, as the plum tree benefits most from rainfall.

“There is very little this year, the drought has affected us, but there are many factors, for example, they do not take much care of the bee and it is what makes the trees bear fruit. Also, the older the tree it gives less when they are brand new give more, “he lamented.

The fruit that falls by itself is the one chosen to go through the cooking process, the one that is cut by hand is the fresh one and the one that is put to dry lasts two days exposed to the sun.

If something distinguishes this town it is undoubtedly its plums, the richest in the world as Azael says.

“Those of Agua Caliente de Garate is the richest in the world, they are original and here we are going to give them as long as we can,” he said.

The current season, he indicated, began on May 26 and is expected to last until mid-June.

Its commercialization is a form of livelihood for many families that cultivate this “delicacy” hoping that its economic benefit is higher than that of last year, which due to the pandemic and social confinement, its sale was very difficult.

The sale of plums is a family business in Agua Caliente de Garate; Azael’s father cultivates them, his brothers gather the fruit in the plots, and he sells them.

“I make the honey and chamoy, my dad makes the cooked ones,” he said.

The merchant points out that in his town the harvest of this strawberry is the only source of money for many families, so they eagerly await its arrival.

Its inhabitants mainly support themselves from trade, offering nopales and tamales.

“It is hope, the plum, it is the only way to catch a feriecita and survive.”

Behind the production and commercialization of this fruit, there is a lot of work and investment, Azael estimates that up to 10,000 pesos are spent, also those who collect and cook the plums have to be paid.

“This is an honorable and humble job, but as long as you work and the beans are not lacking, it is fine. When there are no plums I sell empanadas and cooked ones in beaches and restaurants, I am a trader all year long,” he said with pride.