In this pandemic, tours have been offered for locals and national tourism

Mazatlan, Sinaloa.- Given the lack of activity by the suspension of cruises about 20 drivers and guides for tourists in Mazatlan have migrated in looking for new opportunities.

The president of the “ Rafael Buelna ” Tour Guide Drivers Association, Fernando Tirado Díaz, explained that of the 60 members only about 40 are active, the rest are carrying out other activities to survive.

Some have emigrated to other places, such as abroad, of the 60 that we are productive we remain about 40, but we hope that once the cruise ships are reactivated they can reintegrate. This crisis comes every 10 years in one way or another, but they had not been as long as this, “he said.

Tirado Díaz said that so far he does not have a date for the return of the cruises to Mazatlán, he could tentatively restart operations for October, which is when the high season for arrivals begins.

“There are other operating companies that see it more optimistic, some say that in July because the Carnival Cruise Line shipping line has some schedules, it is a scheduled arrival per week that has not yet been canceled,” he said.

The service provider for cruise passengers pointed out that in this pandemic they have had to adapt to the new normal, offering tours for local tourism. 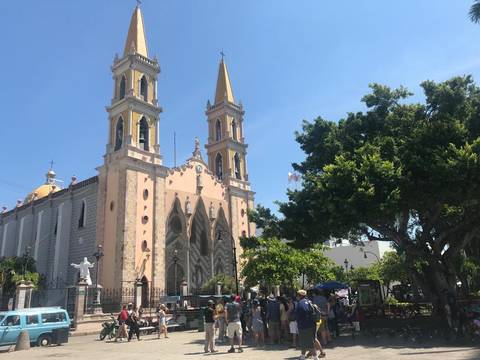 In this pandemic, tourist guides have had to adapt to the new normal

He explained that they had to create a system of local and regional tours for national tourism.

“ This is what we have been doing lately, there is a tour operator that offers tours to dams such as Comedero in Cósala, El Salto in Elota, and La Picachos in La Noria. It has been very difficult because no support has arrived that is fundamental to get out of the crisis, in fact, this crisis came with the vehicle-renewal and that has affected the economy of several, but there we are ”.