The beer market in Mexico reached a value of 21.587 million dollars, where Heineken was positioned as the second player, with a 40% stake behind Grupo Modelo.

The Vice President of Corporate Affairs of Heineken Mexico, Marco Mascarúa, assured that there is a potential for the growth of the company in the country, due to the demographic bonus.

According to the manager, the beer industry is a national and industry engine, which has behaved very dynamically, where competition is always forcing them to present new products.

“We are a company that has 128 years in Mexico. We are always investing and thinking about the long-term; for us, our plans continue as we have been planning, “he said.

Marco Mascarúa commented that Mexico is the main exporter of beer worldwide, “and that seems extraordinary, we are the fourth producer, only behind China, the United States, and Brazil. We are a brewing power, “he said. 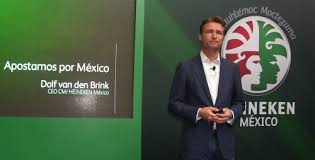 The vice president of the company indicated that 2018 has been a very good year, which has an important symbolic value for Heineken, since they opened their first plant in 25 years, located in Meoqui, Chihuauha, with a production capacity of six million hectoliters.

According to Euromonitor, in 2017 the beer market in Mexico reached a value of 21.587 million dollars, where Heineken was positioned as the second player, with a 40% stake behind Grupo Modelo, with a 57% share.

Cerveceros de México points out that in the first six months of the year the country’s production was 59 million hectoliters, a growth of 13 percent compared to the same period of 2017 when 52.5 million were reported.

The Chamber adds that from January to June, in terms of exports, the figure of 19 million hectoliters was reached, which meant a growth of 15%, and export favored the trade balance in that period, to reach a surplus of two 1,100 million dollars, 15% more.