“We do not want to see the UN on our way,” said one of the migrants.

They criticized the president of the United States, Donald Trump, whom he demanded that he recognizes them as refugees and not only as migrants.

Members of the migrant caravan of Central American origin accused the United Nations (UN) of having lied to them, so they asked the latter not to follow them on their trip.
“We do not want to see the UN on our way,” said one of the migrants who decided to
remain in Ciudad Deportiva in the Mexican capital. 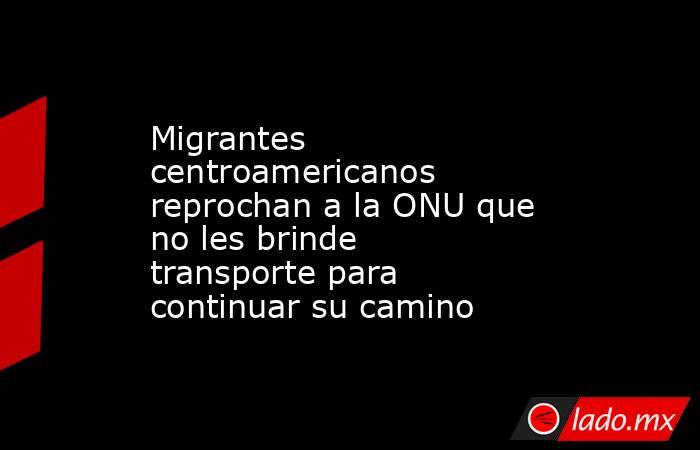 The Central Americans reproached that the international body has refused to provide
transportation to continue their way to the United States reported Reforma.

“They have taken their decision to tell us no, I come to face, to denounce the UN, the
president of Mexico, Honduras, Salvador, Guatemala, because they are the ones who are
making the UN not support us,” said Joel García, from Puerto Cortés, Honduras.

“We have children, pregnant women, sick people. These are things that the UN could solve. We have made the decision not to want to see them in our caravan, he added.

Another migrant of Salvadoran origin, identified as Carlos, said that the UN has not been able to provide transportation despite all the structure it has, contrary to the inhabitants who have helped them during their journey.
“The only thing we ask for is free transit because our goal is to reach the north, not be
here,” he said.

Elena, another migrant, said that the international organization has not taken into account the insecurity and health problems that Central Americans during their journey.

“The only people we want to accompany us are the Human Rights Ombudsman of Oaxaca, who have never left us alone,” he said, as well as the work of the National Human Rights Commission (CNDH).

Meanwhile, Emmanuel Garcia criticized the president of the United States, Donald Trump, whom he demanded that he recognize them as refugees and not just as migrants.

“We know the history of the President of the United States, he is also of immigrant parents and how it is possible that he is denying entrance to families that are here,” he said.
The migrants also accused President Enrique Peña Nieto of hindering transportation, and
recalled that in Veracruz about 100 travelers were kidnapped, of whom so far they have no news.
In addition, they noted that although they had planned a meeting with the president-elect, Andrés Manuel López Obrador, this was not carried out because of people close to AMLO rejected meeting