The head of the Sector Development Unit of ProMéxico, César Fragozo, defended the existence of this organization by listing emblematic achievements during the current six-year term as having helped companies such as Cinépolis to establish in India, Bimbo, China, and Gruma in Southeast Asia

He explained that the goal of ProMéxico is to help small and medium-sized companies but also large ones when they want to go abroad. 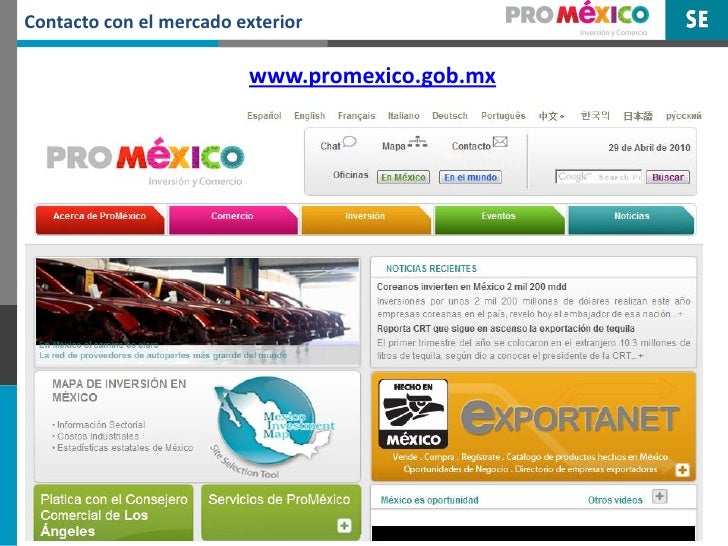 These statements came after the next foreign secretary, Marcelo Ebrard, announced the future disappearance of ProMéxico as of December 1, 2018, and that the ambassadors of Mexico in the world will make the tourist, commercial and economic promotion of the country.

César Fragozo said that in 11 years, ProMéxico has given concrete results in the attraction of foreign investment, promotion of exports and the internationalization of Mexican companies. “It is estimated that around 200 billion dollars will come in this sexennium through direct foreign investment, of which ProMéxico has contributed 40%,” he said during a press conference, where this federal agency and the Amazon company signed an agreement for the development of electronic commerce of small and medium-sized Mexican companies, within the framework of
Mexico exports EnUnClick.

“We have had 274 internationalization projects over two thousand 500 million dollars; we have given 6,400 support to SMEs (small and medium enterprises) “.

When questioned about whether or not it would be a mistake for the Mexican economy the disappearance of ProMéxico, the official replied: “I think there would be an opportunity cost simply for all medium and small companies.”

However, he clarified: “I can not suggest or comment on the decisions made by the next government.”

On the other hand, when consulted by
El Sol de México
, the commercial manager of the tubular element company Konekte, Pedro J. Villa Encinas, stressed that it would be an error of the next government to the disappearance of this body.

He gave as an example the case of Cuba, which has its promotion office, like Colombia, Chile, and Peru; In addition, Brazil “is very aggressive”, so if they remove the ProMéxico office it would be a step back in the nation, something that “has no reason to be.”

In the second edition of  ECSE Show 2018 that was held at the Citi-Banamex Center, César Fragozo and Brian Huseman, Vice President of public policies of the Amazon company, signed a collaboration agreement, with which they seek to promote a thousand companies so that in the next 12 months to export their products worldwide through its platform.