Located on Mexico’s Gold Coast, Mazatlan lies near the point where the Sea of Cortez (also known as the Gulf of California) flows into the Pacific Ocean. Mazatlan has been one of Mexico’s major ports since the early 19th century; and the city, known as the Pearl of the Pacific, also has developed into a popular vacation destination. Mazatlan’s proximity to the confluence of two great bodies of water makes it a mecca for sports fishermen.

Mazatlan describes itself as the billfish capital of the world, and the heavy concentrations of sailfish, swordfish, and marlin in area waters would seem to back up that claim. GoMazatlan.com credits the large numbers of billfish to Mazatlan’s proximity to the junction of the Pacific and the Sea of Cortez, which acts as “the world’s greatest natural fish trap.” According to the site, swordfish and striped marlin run through area waters from December through April; sailfish move through from March to December, and blue and black marlin run from May to December.

Inshore bottom fishing yields a wide array of great catches for fishermen who’d prefer to do their angling from land or from small boats in sheltered waters, including bays, lagoons and inlets. MexFish.com reports that inshore fishermen can hook a variety of species, including corvina, snook, true red snapper (known locally as huachinango), grouper, sea bass, sierra, mixed jacks, mojarra, pompano, roosterfish and triggerfish. MexFish.com encourages visiting sport fishermen, who may be unfamiliar with the prodigious quantities of fish that inshore fishing can yield, to exercise self-restraint to prevent damage to local fisheries.

Sports fishermen who can’t resist the challenge of going after the larger game fish found mostly in deeper waters have a large number of deep-sea fishing boats and charter craft from which to choose. Offshore runs typically last 6 to 12 hours and venture 20 to 25 miles from port, usually sailing southwestward from Mazatlan. In addition to the billfish — marlin, sailfish, and swordfish — these deeper waters are home to several other species of game fish, including dorado (also known as dolphinfish or mahi-mahi), mako shark, wahoo and yellowfin tuna. Visit the Marina Mazatlan, close to the city’s historic district, or the Marina El Cid, located north of town, to take your pick of the boats that venture into offshore waters.

Although most visiting anglers go after the larger saltwater game fish, Mazatlan has something to keep freshwater fishermen happy as well. Located 65 miles northeast of Mazatlan, Lake El Salto offers some of the best bass fishing in the world. The sprawling man-made lake, created in 1987, covers 26,000 acres. El Salto Adventures Lodge, operated by Amazing Outdoors Tours, is typical of fishing camps found in the area. One of the lodge’s guests landed the lake’s biggest bass, weighing in at 16.1 lb., in December 2001.

An hour outside of Mazatlan, at the base of the Sierra Madre Mountains, Lake El Salto is world renowned for its bass fishing. With tours departing daily from Mazatlan, including El Salto Adventures, Mexico Bass Tours and Trophy Bass Angling Adventures, fish enthusiasts have easy access to prime angling. More remote and less crowded than El Salto, Lake Comedero is 100 miles from Mazatlan, near the small village of Vertedore. Known for its fertile waters, with fisherman catching upwards of 40 to 60 Mexican black bass per day, the lake offers few amenities and only one modern lodge nearby. 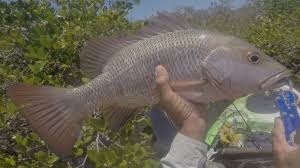 Just outside of Mazatlan, go casting, trolling, bottom fishing and fly fishing in the small village of Tescapán. Fish for snook, red snapper, white sea bass, grouper and triggerfish in a large estuary surrounded by mangroves and stretching for 30 miles. Calm waters, an abundance of fish and scenic surroundings make the mangroves attractive; while you can find substantial fishing year round, the best time to catch large numbers of fish is during the winter and spring months.