The mood in Mexico has been a roller coaster: if elections, the triumph of Mexico in sports such as swimming and the elimination of the National Team in the World Cup in Russia. That’s not all, because now Tehuacán Cuicatlán is a World Heritage Site.

This was announced by Unesco in its Twitter account, which also unveiled other places that join the list, such as the Bikin River Valley, in Russia; Fanjingshan, in China; the national park of Chiribiquete, in Colombia; Christian clandestine sites, in Nagasaki, Japan; the Buddhist monasteries in the mountains of Korea, among others. 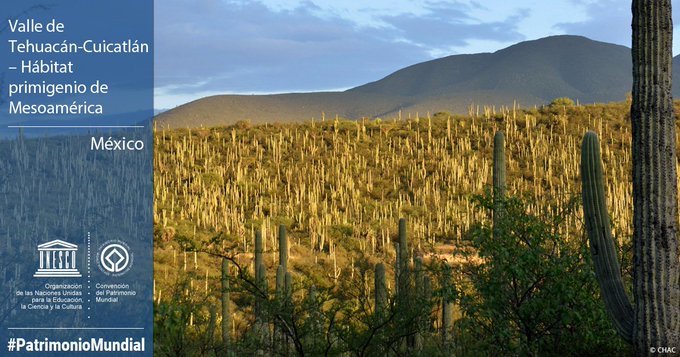 Unesco, since 1972, has named places that are “invaluable and irreplaceable” throughout the world. In the list are sites that have a great natural and cultural wealth of the countries. In Mexico, there are several places that are part of this category, such as the Historical Center of Chilangolandia, Sian Ka ‘an, Monte Albán and the Center of Oaxaca, Teotihuacán, Chichet Itza, the Study House of Luis Barragán, University City, among others . Now, Tehuacán Cuicatlán is a World Heritage Site along with these other places.

Tehuacán Cuicatlán is in Puebla and in Oaxaca, and it received the name of World Heritage as a mixed site, that is, it is cultural and natural at the same time. In Mexico, we have two sites in this category, the other is the Mayan city of Calakmul.

What to do in Tehuacán Cuicatlán?

This place covers several municipalities of Puebla and Oaxaca and occupies about 490,186 hectares. It has a great biodiversity, especially cacti: there are biznagas, sotolín, Siempre viva and more. In terms of fauna, some of the most representative species are the flying squirrels, the jaguar, the green macaw and the golden eagle.

In addition, there are eight ethnic groups here, such as the Nahuas, the Mixtecs, the Mazatecs, the Popolocas, the Cuicatecos, the Ixcatecos, the Chocholtecos and the Chinantecos, who keep their traditions alive.

Now that Tehuacán Cuicatlán is a World Heritage Site, get to know it. You can see giant cacti in the Helia Bravo Hollis Community Botanical Garden -the entrance costs $ 60- and do ecotourism in the Sabino Canyon. There is also a small river where there are different aquatic species – pay attention, because you can see marine fossils, like starfish – and there is the Paleontological Community Museum.

You can get there by car from CDMX, they are about four hours away. If you prefer to go by bus, take the one that leaves to Tehuacán from the TAPO.

The all-inclusive boom coming to Mexico