With 20 years of experience, Carlos Loaiza “Lesor” carries his message of faith through murals in the streets of Mazatlán.

Mazatlán, Sin.- Graffiti is an artistic expression that was born to express various emotions and feelings, among which social and protest themes have predominated, which have seen the talent of thousands of urban artists exploit.

Even today illustrators and graphic designers have potentiated their skills to adopt this trend and take advantage of it as a way to give life to a diversity of public spaces .

Such is the case of Carlos Loaiza, better known as “Lesor”, a Mazatlan who discovered his talent thanks to graffiti, in 1999, when street art was living its best time.

A year later he painted his first mural as such, with more complex pieces, colors and illustrations in one of the avenues of Fovissste, from there he began to ask for spaces to develop his creativity.

“At that time it was difficult, because it was said that graffiti artists were lazy, cholos, and in order for them to give me permission to paint the fences or walls in a house, I had to first show the sketch of what I wanted to do.”

Since he was in kindergarten, he liked to draw and color and it was at the age of 13 that he began to scratch illegally on various avenues. At 18 he already started with artistic graffiti.

Remember that his father studied technical drawing and his work was more of an architectural type, so those geometric shapes he used were the ones that somehow awakened his art DNA.

“Lesor” studied a degree in Graphic Design at Itesus and after working for several years in different advertising companies, as an illustrator, teacher of design and drawing, he now works on his own. Little by little he began to make his way with his art, which has taken him to different states of the country and the United States.

Commercial art gives him the sustenance to live, but his thing, what fills him, are the murals on large walls. His art was born in those spaces, in graffiti, the walls in the streets are the perfect canvas.

“In all the jobs I have been, I have learned a lot and then the time comes for graffiti art, urban art. To be talked to and paid well for that project, that you do it with that passion and taste for painting, is an achievement. for me, now they make me my proposal, but already with my style ”. 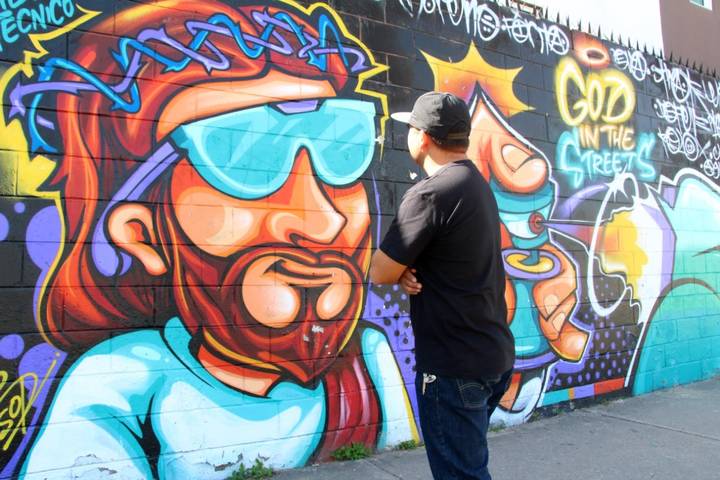 At present, he also works as a visual artist and states that transformations, changes, processes and development are what move life.

“Throughout the year’s nature and humanity have been involved in great revolutions and events that marked history, and gave an important turn to the present and the future,” he said.

With 20 years of experience in urban art, he seeks to capture figures and colors that children, youth, and adults alike, so that they identify with each designed image.

The visual artist, who was born and raised in the Lico Velarde neighborhood, has dozens of murals in the streets, avenues, churches, and neighborhoods of Mazatlán because through art he transmits his message of Christian faith.

“In Mazatlán there is a lot of talent, in the streets, neighborhoods, young people make good illustrations, they are very good in the arts, but there is also a fight against the entire street movement, which is drugs and much of that talent has been lost due to those vices, “ he said.

“There is a phrase that I always tell them: ‘if God gave you a talent, put it at his service.’ Many times we have a talent, but we express something negative, art is beautiful, but if apart we give something positive to our society, that It is missing a lot, it is what they bring inside and it is their way of expressing it, as they say, your mouth speaks of the abundance of your heart “.

Within his works there is geometry, illustration, suddenly caricature, pop art, among other styles.

“I’m not that realistic, but sometimes I can add something with color, suddenly something very abstract, I give it a lot of freedom, whatever flows at that moment, I do. “

For 2022 he has the invitation to go to show his work in Guatemala, Bolivia, and Argentina, in addition to that he also has a project with a group called Dios en las Calles, where he seeks to have a mural in each neighborhood with that positive message of values. In the not too distant future, you wish you could have a mural in every state in the country.

“There are many called, but few are chosen, there are many who seek, but few who find. Never forget that you can be an inspiration to many, that there is someone looking out for you, that you need to be an example, to be in front and not behind. It is in your hands to make a difference, outline and draw a new story, “ said the visual artist.

In recent years “Lesor” has painted murals in some restaurants in Mazatlán, with which he seeks that his art can be known by many more people.