So far, no police element has been suspended when some type of investigation is carried out, since they are relocated to other areas or sectors.

Mazatlán, Sinaloa.- In the Municipal Public Security Secretariat, one lives and breathes an impunity that amazes the most incredulous. During the time that Commander Juan Ramón Alfaro Gaxiola has been in command of the corporation, there have been several police cases of abuse that have remained in impunity, not to say overlapped by the same police authority.

After there has been no action by the authority to impose justice against police elements who have abused the use of force and even exhibited alleged theft, nothing has happened. The mayor Luis Guillermo Benítez Torres himself can be seen saying from the rooftops that they are going to be fired and even sent to jail when nothing happens. The mayor looks bad.

According to the official information released by the same Coordinator of Legal Affairs of the Municipal Public Security Secretariat, no police element has been suspended while the investigation is being carried out; 3 elements have been relocated to other areas or sectors while they are being investigated, and to date, no municipal police have been suspended for abuse of authority / excessive use of force, much less any agent dismissed.

ONE AFTER ANOTHER WITH THE MUNICIPAL POLICE

On June 8, Mayor Luis Guillermo Benítez Torres announced the creation of a new Internal Affairs Unit. Over the weekend, a video had been circulating showing municipal policemen aboard Patrol 3855 beat a motorcyclist with force. In the video, you can see how he is beaten with his fists.

He announced that the police elements are already suspended from their work activities and investigated by internal control of the corporation: “I promise that this will change, we are not afraid of reprisals, reason assists us, it is an act of justice and who abuse of the human rights of a person must be sanctioned with the full force of the City Council ”, he said.

Of the police aggression and its outcome, it was no longer known …

On November 30, Commander Juan Ramón Alfaro Gaxiola was ratified by Mayor Luis Guillermo Benítez Torres as Secretary of Public Security of Mazatlán. The police chief had been in charge of the office of that corporation since last July after the departure of Captain Federico Rivas, who returned to the Secretary of the Navy.

But once again, the crew of patrol 314 were shown to have looted a flatbed car that had been stripped minutes before from its owner by the Playa Sur subdivision. The young man who was attacked went to the Red Cross to attend to some wounds with a knife.

After filing the complaint, the police found the vehicle abandoned, but so did relatives of the stripped driver who could see how the agents stole some objects from the vehicle, such as rugs and other things inside. When they were discovered, they threw everything into the patrol and fled. But they did not say that the relatives were filming them on video.

The next morning, Mayor Benítez Torres, outraged, announced that he would act against these police elements and even assured that they were going to be discharged. What’s more, in a recorded video, he announced that he was going to investigate and act until their last consequences … but they were not discharged, their police chief relocated them to other sectors, while things cooled down: “The instruction was given to take Letters in the matter about these three elements that did wrong. They were immediately removed; right now they are assigned elsewhere. “

Weeks later, it would report that one of the participants retired and the other was changed sector… That is, nothing happened. But the abuses continued.

On May 19, on María del Socorro street, in the Bugambilías neighborhood, around 8:30 at night, the policemen on board a patrol ran into a young man who was traveling on a motorcycle. When they got out, they began to attack him and one of them threw the motorcycle to the ground. As the attacked young man begins to shout for help, a policeman slaps him, and as some neighbors approach, another police element threatens them and even throws the seat of the detached motorcycle at the young man.

The young man went to file the complaint with Internal Affairs. It did not prosper, they reported days later.

And the last unfortunate event was last October 13, after the passage of hurricane “Pamela”, where the photojournalists of an online news portal, Erick Daniel and Brian Omar, were arbitrarily detained, they were beaten by the same policemen when they were placed aboard a patrol unit after they were also covering the arrest with the use of force against some surfers.

The case is feared that it will go unpunished after the police continue to work, especially the operative chief who beat one of the photojournalists.

According to a request for access to information, which is requesting the number of complaints received for alleged abuse of authority and/or excessive use of public force against police elements of the Ministry of Public Security of Mazatlán in the period July 2020 –September 2021, the Head of the Internal Affairs Unit of the Municipal Public Security Secretariat, briefly answers the requested information. 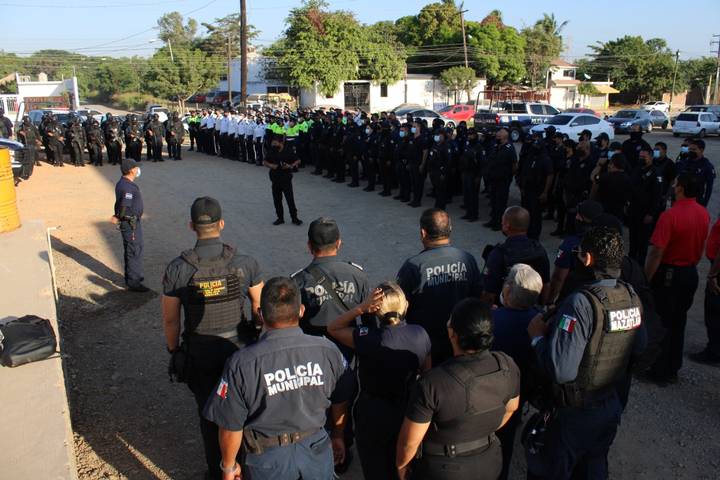 An official letter No. UAISSP 1106/2021, dated November 3, the lawyer Olivas Ramírez reported that in the aforementioned period, 37 complaints or reports have been channeled to Internal Affairs, both for excessive use of force or abuse of authority in that period.

However, the Internal Affairs Unit clarifies that the referred suspension of the elements that have been denounced for police abuse is not the authority of this Unit, for which reason it does not have information available. It also points out the same when requesting elements that have been relocated to other sectors while they are being investigated.

However, it specifies in the request for information regarding the number of elements suspended for being responsible for abuse of authority and/or excessive use of public force, the following: “… it is reported that the Honor and Justice Commission has been turned 01 demand for the purpose of initiating the corresponding procedure against elements presumably responsible for the excessive use of force in their service ” .

It is not specified which complaint it is, if it is the aggression and use of excessive force against the two photojournalists.

Given the little information issued by the Internal Affairs Unit, it was the same Legal Affairs Coordinator of the Municipal Public Security Secretariat, Mr. Edgar Ramírez Gudiño, who clarifies and amplifies the information requested from the police corporation through Access to Information.

“… and in consideration of point five in which there is no response, I would like to inform you that no element was suspended while the investigation is being carried out.”

In addition, he indicated that regarding the sixth point, “I would like to inform you that the number of elements relocated to other areas or sectors while the investigation was being carried out was three.”

While in the eighth point, “I would like to report that up to this date (November 4, the date of his office), no element has been suspended for abuse of authority / excessive use of force.”

And finally: “Regarding the ninth point, I would like to inform you that up to this date no element has been removed,” explains Ramírez Gudiño.