For 30 years, the Down Foundation carried out actions to sensitize and raise awareness in society

Sin.- In March 1991, motivated by the birth of their children with Down Syndrome, Patricia Peña and Raúl Valdez created the Down Foundation of Mazatlán.

To date, they have worked on various actions such as raising awareness and sensitizing society through information talks in educational establishments at all levels.

Educational support is also provided to children and young people with reading-writing workshops, there are language, psychomotor and early stimulation therapies for babies. In addition, congresses and conferences related to the topics are attended and given, which are open to the general public.

“When a baby with Down Syndrome is born, we go to the hospital or to the family home and do what we did not have; that the father feels understood, emotionally supported; we make the father feel that he is not alone, that he is not what your son has is something horrible, fortunately, there are many possibilities to support him and accompany him throughout his life to give him the best tools to be independent, “ said Patricia Peña, president of the foundation.

To collect financial funds, they carry out various activities, such as breakfasts, raffles, concerts and whatever else is possible.

“What we needed to do in support of young people and adults was a productive labor workshop, we had a couple of years waiting for the opportunity because strong economic resources are required. Three months ago we obtained a rounding donation in the Moderna Pharmacies, thanks to That is why we are finally working on that project that consists of young people participating in making pizzas to the extent of their possibilities, “he commented.

The goal is for boys and girls to feel useful, motivated and included; It is an activity that will raise their self-esteem, feeling the satisfaction of having contributed something.

“Also that they are given an economic remuneration, that also motivates, that is very satisfactory for them, as in any person; they need to be useful, feel that they can do something, that was the interest of doing this project and also that it be something self-sustainable for the foundation, “he added.

The project is still in practice and like the rest of the activities, for the moment, due to the health situation, they have been forced to stop temporarily and also due to the economic resource.

Inclusion is not said, it is done. Between inclusion as a theoretical principle and its implementation in reality, there is still a large gap associated with a lack of empathy, ignorance and stereotypes.

“On the one hand there are the stereotypes, the comments that are due to ignorance, although there are also comments due to a lack of human quality, of sensitivity. You have to understand that first they are people and then people with Down Syndrome, they are not angels either, it is a life condition, which, although it places them in vulnerable groups, the important thing is that they can achieve a lot, develop their capacities, their physical abilities, “ he said.

Although they have the right to have access to all educational opportunities, school inclusion has remained a duty, at least in the port and the state; in regular schools, there are no programs designed, nor are there staff to provide support for the development of their capacities. Educational activities, according to their possibilities, with specific programs, there are, fortunately, but they are usually in private or special institutions for children with DS.

“There are parents who express that they want to put their child in a regular school, you have to be very careful, really be very committed as parents, that it is worthwhile for the child. It is not to put them in regular schools just to feel comfortable, no feel bad that they take him to an institution for children with Down Syndrome, “he said.

Sports inclusion has also fallen short; Zumba and taekwondo classes have been taught in the association, however, they were only temporary, due to lack of resources. Only one of the boys had the opportunity to continue with his training by his own means, living with other boys without DS, and today he is already a red belt.

“That there is a lack of specific spaces for them, I really wouldn’t say it like that, what I think rather is that there is a lack of support, there may be many families whose children want to be in taekwondo, but do not have financial resources, it is a limitation. It would be. It is extraordinary that associations like us will be supported by the municipality with a teacher in a sporting discipline ”. 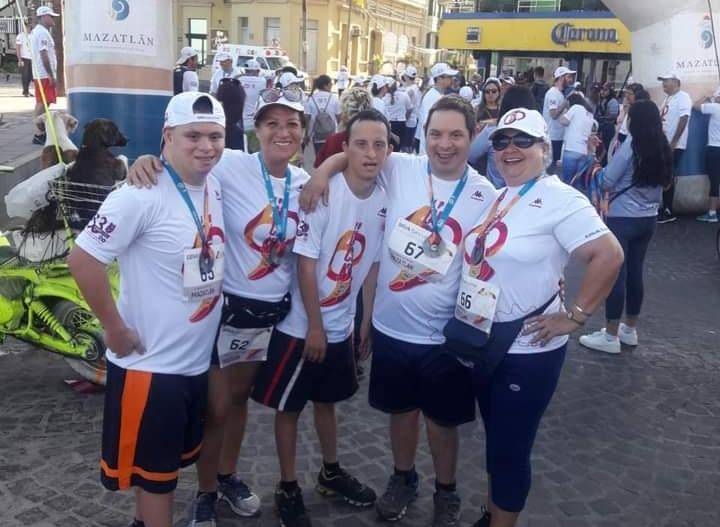 Educational support is also provided to children and youth with various workshops.

Patricia believes that an effort has to be made, that there is commitment and that more quality options can be offered to her; promote more public social policies so that they can be fully developed at the school, social and family level.

“In Carnival there was an inclusive parade. That is a car where they only go and it is not like that, the inclusion is that in any allegorical car they invite one of the boys with syndrome, and who do they invite? I don’t know, parents What do you know, from the DIF, through relationships? but that is not inclusive, “he said.

The Covid-19 pandemic has been very difficult as for anyone else, to be confined to home, even more so when their activities were suspended. Also, adjusting to the new normal may take a little longer.

“There are all cases, many of them agree to wear face masks, others do not, there is a lot of sensitivity, they have illnesses that cause anxiety and they do not accept that you put a face mask on them, the same with injections, for vaccination, nor do they agree to inject, some cooperated very well, but it is very difficult, especially if they are already adults; that is a difficulty right now, “he revealed.

Formally, there are 18 families that make up the foundation, there are babies, children, and adults. The Down Foundation of Mazatlán was a pioneer in Sinaloa of its kind.

The interest of Patricia and of all the parents that make up the foundation is that there be a more empathetic and conscious society, who can understand that within their limitations, people with Down Syndrome, like any other, also want to love and feel loved, they want to be independent and have friends.

“When we started the association, we saw that there was a great lack of information support, that there was, but we had to leave Mazatlán and see what was happening in the world, see what writings there were about Down Syndrome. Throughout these years Yes, much progress has been made and today there is more openness in society, there is more respect, we still have much more to do, sensitize and raise awareness in society that our children require, like any other child, respect and understanding, “he concluded.

Fundación Down de Mazatlán is a Civil Association in support of people with Down Syndrome.

Promote a culture of INCLUSION; every day we promote positive attitudes in society so that our children are accepted by their parents and respected by the society to which they belong by right. Putting first they are people and then with Down Syndrome.

Fundación Down has been in Mazatlán for 30 years.

Down Syndrome is not a disease, it is a condition and a real inclusion in society of people born with this condition is necessary.