In the last two months, El Sol de Mazatlán has reported network problems in 14 colonies of the port

Mazatlán, Sinaloa .- During the months of March and April, residents of 14 port colonies, two of them on more than one occasion, have reported to El Sol de Mazatlán having problems with the hydrosanitary network in their settlements, mainly with overflowing sewage.

The settlers point out that the Municipal Board of Potable Water and Sewerage takes two to three months to attend to their reports and others to leave the road as it was before it was repaired; in some colonies, the pipes are so old that they have collapsed and require major “ surgery ”.

In March there were eight reports made to this media; at Infonavit Playas, where residents say they have been struggling with drainage for 30 years; in Urías, in Pradera Dorada, in Juárez, and on the Paseo del Centenario.

Also in Pino Suárez, where they installed a “vent” for the Urías II treatment plant, in front of a house and from which smelly residues sprout every night. In addition, in the Hogar del Pescador even male condoms sprouted through the sewer, and in the Palos Prietos neighborhood a neighbor reported that the Jumapam broke the pavement halfway through the road and it took more than a week to resume work.

In Sánchez Celis, they also reported continuous clogging in the drainage network.

“Often it is covered and they also come to uncover it, but I think that pipe is already broken and it needs to be fixed because everything returns to my registry and then it is a plague,” said Virginia, a resident of the colony.

A neighbor of that settlement pointed out that since August of last year she began to have problems with her home discharge. With effort, he raised the money to pay for the replacement, which costs almost three thousand pesos, but the Jumapam people went until January to replace it, five months later, and only in March they went to lay the pavement of the road. 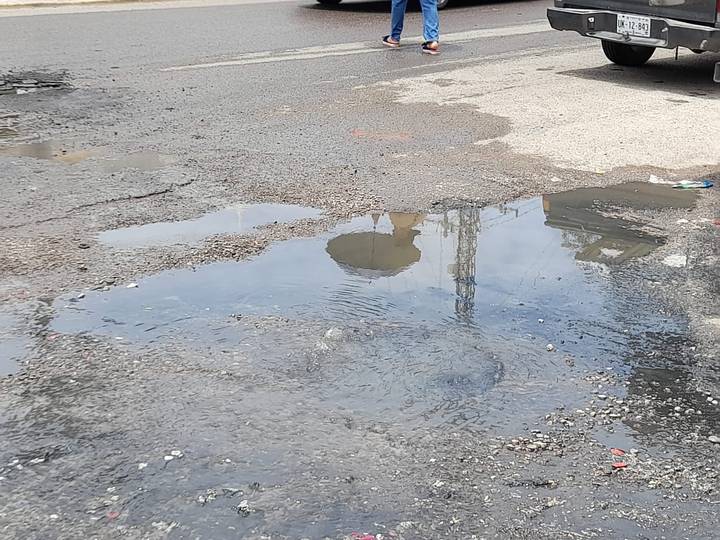 Faced with the growth of the city, the number of problems in the hydrosanitary network also increases

In the Juárez neighborhood, again, but in a different location, even the residents of Río Piaxtla street and Juan Pablo II avenue blocked the road in protest until the paramunicipal gave them a solution.

In Pradera Dorada, for the second consecutive month, a sewer was reported on Genaro Estrada street that had been overflowing for months and that had already formed a large pool of waste. Lastly, in the María Antonieta subdivision, since last year the pipeline collapsed and a sinkhole was formed; He has not been treated for five months.

NO MATERIAL TO WORK

He said that every day they work to solve the drainage problems in the port, which are many due to the growth that the city has had.

“We are trying every day to solve the drainage issues, which are many because there have been enough developments and there are many pipes that are thundering,” he said.

He assured that with the 12 dumping trucks that the paramunicipal has, there is the infrastructure as a team to provide service to the city.

Faced with the growth of the city, the number of problems in the hydrosanitary network also increases

However, neighbors from different neighborhoods mention that it takes up to three months to attend to both the sewage and drinking water leaks.

“The issue that we are suffering is not typical of Jumapam, it is worldwide, the polymer that makes the PVC pipe is very scarce, we have a lot of problems because it is taking a long time, there is very little, because of the Covid-19 issue it stopped and it was scarce, it is not so much Jumapam, “he said.

Between the age of the lines, the shortage of material and the main problem, that people use the drainage network as a garbage dump, said the general manager of Jumapam, they are making the work of the paramunicipal difficult.

In settlements such as Infonavit Playas, drainage problems have been going on for 30 years, according to a note published in El Sol de Mazatlán on March 2 of this year; while in “new” subdivisions, such as Pradera Dorada, the pipes have been collapsed for two years, as this newspaper also recorded in its March 12 edition.

“We have drainage problems in the colonies that take little care of the issue, because we find that they put out a lot of trash and also the incidence is in the oldest colonies of Mazatlán, where the drainage is collapsed,” said the manager of Jumapam.

The Juárez, Ferrocarrilera, Centro, Villa Galaxia, Montuosa, and López Mateos neighborhoods are some of those that have the greatest damage to the drainage network.