Mazatlan, Sinaloa.- Although according to the evaluation made by the Public Works Directorate of the Municipality, the reincarnating of hydraulic concrete works on Avenida Del Mar is between 60 and 70%, it is doubtful that the roadway is Completely released at the end of November.

Juan de Dios Garay Velázquez, Director of Public Works, indicated that he reserves some doubts for the completion of work, prior to the Pacific Marathon 2018, because there would be some details that would have to be worked on, after having made a supervisor tour.

“We made a quick visit and, in a very general way, we estimate an advance of that order, between 60 and 70% of the work, there are things that are in the project and that may be hidden from our eyes, not executed and the moment to determine that, could give us that margin of speaking of 60-70%, if there is nothing that could be in the subsoil to execute, then we would speak of the maximum range, “he said. 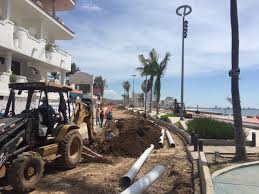 However, the municipal official said that he gives the vote of confidence, that forced marches will conclude the work, because the word of the governor of the state, Quirino Ordaz Coppel, is pledged.

For the Marathon that would be 1 and 2 of December, I would be with some doubts, in some of the items, but there is the governor’s word and we hope that this word is fulfilled, so that Mazatlan gives the best face that it can give to the tourists in such a special event, like the Marathon. Juan de Dios Garay Velázque.

He added that the agreement remains that this Saturday morning will open access to traffic in the lane from North to South, although they still do not define whether it will be in one direction or inverse directions, in order to expedite vehicular traffic in other areas of the city and, for this, it will also have to work at forced marches, especially in cleaning tasks and caulking details.

For the supervision of the work of Avenida Del Mar and all the works, the Public Works Directorate has only eight supervisors.

Garay Velázquez reported that in the balance received from the previous administration, 70 works were indicated, with own resources and FAIS (Contribution Fund for Social Infrastructure).

Of the above, detailed, there are works for 2018 completed, but with small balances in favor, works with own resources that are 100% completed and paid, works 100% completed and not paid, in addition to works that have not started, while between four and five cases have been found, of works totally paid and without progress.

What happened to the rental bicycles that were on the Malecón?

The trend of development goes towards the South of Sinaloa: Learn out why