Home National Migrant ‘caravan’ making its way through Mexico ignores the real problem: Decades...
Facebook
Twitter
Tumblr
Linkedin
Mix
ReddIt
WhatsApp
Pinterest
With the US-bound caravan of Central American migrants being used as a political football ahead of the midterm elections, there’s one-factor receiving scant attention: The role the US itself has played in destabilizing the region.

US President Donald Trump has condemned the migrants, many of which began their journey in Honduras, calling some of them “hardened criminals” and suggesting that “unknown Middle Easterners” are among some 14,000 thousand people making the long trek towards the US border. US Secretary of State Mike Pompeo has also sounded the alarm, calling it a “moment of crisis” for the US.

For those who want and advocate for illegal immigration, just take a good look at what has happened to Europe over the last 5 years. A total mess! They only wish they had that decision to make over again.

There’s is no doubt that this is indeed a moment of crisis.

Already migrants have arrived in their droves at the Guatemala-Mexico border, with some breaking through fences and crossing into Mexico where they clashed with riot police. Others are reportedly attempting to cross into Mexico by river using makeshift rafts and ropes.

The public debate around immigration in the US revolves almost solely around ‘what to do’ about the migrants as they approach the border. One side is willing to receive them as refugees with open arms, while the other feels no obligation to accommodate those who would enter illegally, regardless of the circumstances in which they fled their home countries — but what’s missing from the political and mainstream media conversation is that the migrants didn’t just materialize out of thin air: They are coming from countries that have, time and again, been destabilized by US foreign policy.

Coalition Organizer Gloria la Riva said that US policies of “war, occupation, sanctions, and drug trafficking” in the region have “seriously affected” the countries from which the migrants are traveling and are “forcing people to leave”.

Indeed, for decades, the US has treated Latin and Central American nations like colonies rather than neighbors, intervening in their internal politics, shifting the balance of power with money, weapons and political pressure in order to serve US geopolitical interests — rarely, if ever, sparing a thought for the human consequences. It would take too long to list all the many injustices perpetrated in the region by decades of anti-democratic and neoliberal US foreign policy, but given that the majority of migrants now making their way to the US border came from Honduras, that is a good place to start.

In 2009, under former President Barack Obama, the US tacitly backed a military coup against the democratically elected President Manuel Zelaya of Honduras, an event from which the country is still reeling today. Instead of strongly condemning the coup, Secretary of State Hillary Clinton advocated for new elections. 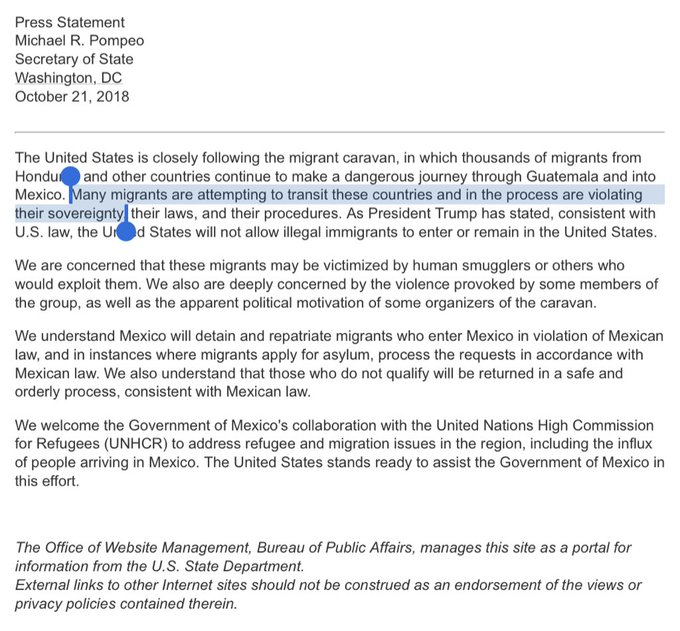 Years after backing a coup against Honduras’ democratically-elected president, the US accuses the refugees fleeing the resultant violence of violating other countries’ “sovereignty”.

Zelaya had implemented some moderate reforms, including a minimum wage — but was seen as too much of a Chavez-style socialist for Washington’s liking. He had also enraged the elite by promising to settle long-running land disputes between poor farmers and the powerful agribusiness industry.

Refugees fleeing Honduras, a country that the Obama administration destabilized with a coup, are now being demonized by a racist republican administration. And Democrats will pretend like their party had nothing to do with creating the problem.

Sadly, it looks like Mexico’s Police and Military are unable to stop the Caravan heading to the Southern Border of the United States. Criminals and unknown Middle Easterners are mixed in. I have alerted Border Patrol and Military that this is a National Emergy. Must change laws!

A brutal crackdown against Zelaya’s supporters soon began, with protesters who took to the streets demanding his return getting beaten, tortured and jailed.
Read more Honduras

election turmoil: ‘People are in the streets like they were after the US-backed coup in 2009’

New elections were boycotted by many Hondurans as mass protests raged on. Lo’ and behold, the new US-endorsed right-wing government introduced pro-business policies and moved to sell off the country’s national resources, making it a death trap for environmental activists. In the years after the coup, Honduras was listed as the most violent country in the world that was not an official war zone. But US mainstream media showed little interest explaining the Obama administration’s role in all of this.

Fast forward almost a decade, as the Trump administration backed the re-election of President Juan Orlando Hernández, who has presided over corruption scandals and human rights abuses. The vote was marred by widespread reports of election fraud from the UN and the European Union.

Honduran human rights activist Dunia Montoya recently told Al Jazeera that the US is “responsible for the situation” in Honduras.

“What is happening in Honduras is the accumulation of the consequences of legitimizing a fraudulent government. They provoked this mass migration from Honduras.”

Montoya said that Trump’s threat to cut off aid to Honduras “does not alarm” the people who are fleeing because the aid “never makes its way into their hands” anyway.

As the Trump administration ramps up the anti-immigrant rhetoric, Democrats are eager to play the role of the compassionate liberals, pretending – or perhaps truly believing – that the problem is really nothing to do with them.

But as we have seen for decades, cruel and devastating foreign policy coupled with seemingly racist immigration laws is not just a Republican problem, but a bipartisan one. La Riva cited former President Bill Clinton’s 1996 ‘Responsible Immigration Act’ which she said was a “calculated, racist” and “anti-Latin America” policy that made it easier for people who crossed the southern border in crisis to be deported, while people who enter the US from Europe but overstay their visas were allowed to remain and appeal the decision.

El Salvador and Guatemala, two other countries from which the migrants are now fleeing, have also been on the receiving end of US foreign policy adventurism for decades, as Washington propped up repressive dictatorships, overthrew democratically elected governments and fueled civil wars, all in an effort to ensure the ability to exploit this vulnerable region and its resources.

If the “Migrant Caravan” started in Honduras, remember that was Obama’s first regime change coup. Leave the rest of the world alone and focus on solving U.S. problems!

From the CIA-engineered coup which removed Guatemalan president Jacobo Arbenz in 1954, an event which plunged the country into decades of civil war, to the ‘anti-Communist’ Reagan-funded death squads in El Salvador in the 1980s, the US has actively sought to squash efforts to build real democracy in the region.

While Democrats and Republicans continue to lash out at each other and squabble over how to deal with the aftermath, they ignore the causes. Instead of using the migrant caravan as a political football, they would be better off reconsidering the decades of unjust policies, supported wholeheartedly by both parties, which have led to these humanitarian crises in the first place.