The secretary of the City Council pointed out that the bosses accuse the workers of sabotaging the service and purposely breaking down the garbage trucks.

Mazatlan, Sinaloa.- The conflicts between the STASAM and the Mazatlan City Council are already taking their toll, but on the citizens, since the garbage collection system presents a series of failures due to this problem.

The friction began on August 23, when union members asked for the head of the Parks and Gardens department to be removed from office for harassment, violence against women and for not providing the necessary tools to workers to perform their duties.

However, in the month of July, Mayor Luis Guillermo Benítez Torres had already accused them of stealing medicines from the Margarita Maza de Juárez Municipal Hospital, when the matter of expired medicines was made known .

Later, on October 6, the union members demonstrated again, but to request the dismissal of the director of Public Services, David Ibarra Olmeda, for not meeting the needs of citizens, due to the lack of garbage collection trucks, material for work and for the famous ” buchona party ” at the City Hall offices.

The secretary of the City Council, Edgar González Zataráin, recognized that these conflicts are not good because the one who ends up hurting the most is the citizenry.

He said that there is currently a very general annoyance on the part of Mazatlecos in terms of garbage collection and that is that the collectors only take the garbage where they are given money, a situation that should not be.

“There are some elements that are becoming corrupted, unfortunately, all those who drive the garbage truck and are in charge are unionized personnel, and I say unfortunately because we are in their hands, as an administration you have to treat them well, give them the tools, ” he said. 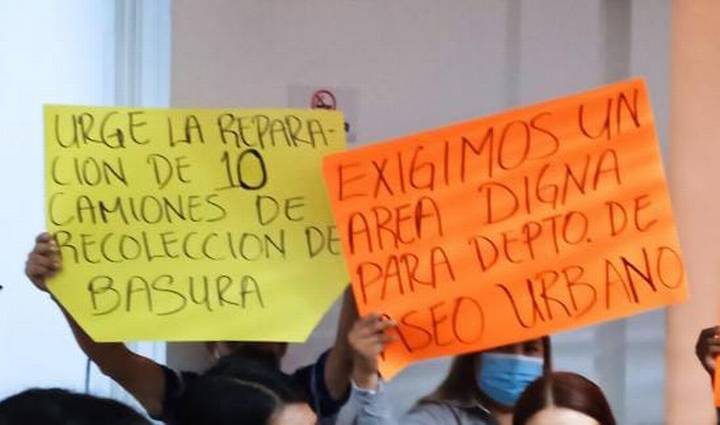 The union members accuse that it is the bosses and directors who do not want to maintain the garbage collection trucks. Photo: Fausto McConegly | The Sun of Mazatlan

He added that Aseo Urbano is a very disputed area because it generates a lot of economic resources. He also mentioned that there are many differences between bosses and union members on the issue of broken-down trucks.

“The bosses say: ‘ no, it’s that they break down the units on purpose . ‘, he mentioned.

In this regard, he indicated that an investigation will be carried out on the condition of the collection trucks, since between 10 and 12 are in the workshop due to some fault, but also lately there have been many traffic accidents where the units are involved, which raises suspicion.

Likewise, regarding the hours of the workers, he emphasized that the collective labor contract indicates that the working day is from six in the morning to six in the afternoon, but the unionized no longer want to work after two.

“The issue is that we come to an agreement, yesterday (Tuesday) we had a meeting with the union leaders, from there we will continue with that to adjust this part,” he explained.

He specified that the idea is to reach a mutual agreement: that the city council provide all the necessary and sufficient tools to the workers so that they can do their jobs and thus the municipality can demand that they do their job well.