In the development that exists in the port, improving public services has not been taken into account, much less implementing mitigation measures due to environmental damage.

Mazatlán, Sinaloa.- Mazatlán is attractive for its natural beauties and has become one of the most demanded destinations for real estate investment, but in the last five years, the city has had significant growth in which it has not been taken into account improve public services, much less care for the environment.

Environmentalist Ángel García Contreras stated that in the face of the real estate boom in Mazatlán, which is expressed in a more nourishing way in the vertical growth of the city with the massive proliferation of so-called condominium towers, it was not planned or regulated adequately, therefore that there may be short-term negative effects.

Towers of all sizes can be seen on the Malecón, Olas Altas, Zona Dorada, Cerritos, and other areas of interest for housing and business development; This undoubtedly benefits the municipality, but if the law is not applied for sustainable growth, it can be counterproductive.

“Environmental sustainability suggests that the use made of natural resources today should not harm or limit the needs of future generations or species that inhabit the planet,” he said.

The authority must be very attentive to applying the regulations that highlight compensation measures for the damage that is generated to the environment.

In a development like the one presented by Mazatlán, the first thing that must be guaranteed is compensation for environmental damage and the most basic that is occurring is the removal of plant cover and the second the disappearance of flora.

It highlights that the regulation for Sustainable Development of the Mazatlán municipality establishes the principle of co-responsibility and environmental compensation and is not applied because the authorities have not wanted to.

“If they are changing as a city, the minimum you have to put to the builders is to establish compensation measures to replace those species of flora and fauna in the appropriate amount or to establish an area in the areas of greater urban concentration to be able to reforest and as the economic compensation specially designed to compensate for environmental damage “.

He added that another problem that is already being generated and will continue is the massive demand for public services that are increasingly deficient.

In the downtown area with the towers that have been built, the population density has grown four to five times more and public services have not been efficient and which generates parking problems, garbage collection.

It is important that a diagnosis be made of the supply of municipal public services to that exponential growth that Mazatlán is experiencing, which demands drinking water, wastewater treatment, garbage collection, parking lots, etc.

The also former director of Ecology considered that it will be channeled, the collection of tower construction licenses, to solve gradually based on the regulations, for the improvement of priority services the situation would be different. 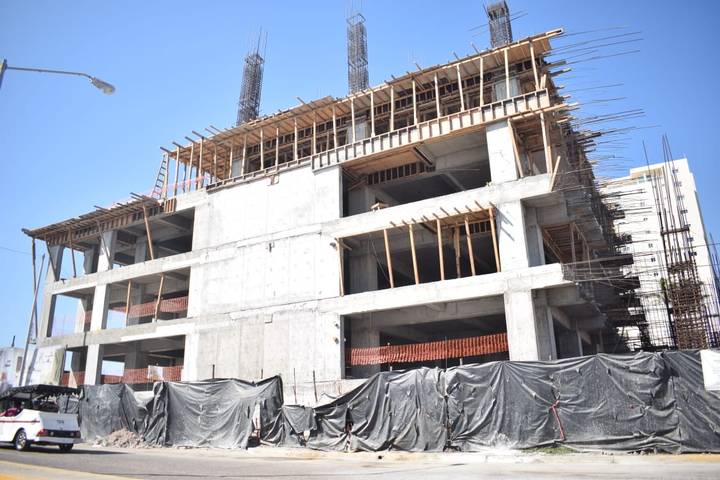 It is urgent to regulate the growth that Mazatlán has in the real estate area.

For the Mexican Association of Real Estate Professionals, this 2021 despite the pandemic is classified as a good year as it closes with 120 developments in process and the opening of investments for horizontal housing.

The president of Ampi, Roberto Carlos Arellano Osorio, announced that for next year there are already 15 to 20 new real estate developments planned in Mazatlán, ranging from vertical towers to horizontal housing developments.

However, he acknowledged that services should go hand in hand with real estate growth. And although there is currently no problem regarding feasibility permits due to the supply of drinking water and drainage systems, in a few years, if there is no investment in hydraulic infrastructure, there will be a real problem.

He regretted that, despite the potential that exists, ground has been lost with buyers from neighboring countries to the north, who like to live in the port for seasons due to the climate and other attributes they like, such as its gastronomy and lifestyle.

Arellano Osorio said that next year they will seek to keep this international market captive through housing complexes that attract their attention and seek to improve the city’s services and infrastructure.

“That is the opening that we want so that the American and the Canadian know that certainty of coming to invest in Mazatlán, which is what we are looking for, Mazatlán has colors, flavors, gastronomy has culture, important spaces and that is what we are selling In addition to our climate that in winter they come to spend a season in our city “.

AT THE EDGE OF COLLAPSE

For the environmentalist David Ocampo Peraza, president of the Center for Agricultural and Environmental Education, municipal institutions have been “small” and “overwhelmed” before the population growth and real estate development that Mazatlán has had in recent years, since there is no It takes a lot for the port to collapse, especially in the matter of basic public services.

“There are many issues that have to be defined and the Institutions have become small. Cities are increasingly fragile because they are not planned for the medium or long term. In Mazatlan it is very easy for it to collapse, the power goes out and we are left without water and where are the emergency plants? There must be alternatives, we are very behind in this aspect, “he said.

He mentioned that there are families in the settlements where large buildings are built, who protest their construction, as they suffer from drainage problems, water supply, garbage collection, and these vertical developments, in addition to housing many more people, nothing more go and connect to the drainage network, a drainage that is already old and obsolete.

Although there are conflicting opinions on the issue of real estate development in Mazatlán, the reality is that the city has been overwhelmed by condominium towers, so it is urgent that construction permits be regulated and that water and drainage services be guaranteed. quality. The great challenge that Mazatlán has is to be sustainable in the midst of this real estate “boom” that no one can stop.

Why did houses go up in price? AMPI explains it