Without permission, they manage to protect the turtle

Mazatlán, Sinaloa.- The civil association ” Cerritos Sea Turtle Rescue ” has been integrated for four years, and since then, its founders, Canadian Thomas Schuss and Ana Morris from Tamaulipas, as well as its members and collaborators, have been fighting by all means to protect and conserve the olive ridley turtle that comes to spawn along Cerritos beach, but despite their good wishes, until today they have been denied permission to intervene and touch nests.

However, this has not limited them in their task of conserving the marine species that reaches that coastal area, because even so every morning, Thomas Schuss travels around 6 kilometers of beach on his motorcycle, from the mouth of the estuary of the Sábalo or Marina Mazatlán to Brujas beaches.

He assures that due to lack of attention to the Sea Turtle Protection Program, in that beach area 2 to 3 nests per week are predated, in addition to that no one is responsible for the dead species that strand in the place and that give a bad image to this tourist destination.

He said he was tired of calling the Aquarius, Profepa and Semarnat to report the cases since they always answered that it was not their responsibility and lately they did not even answer him.

To date, ” Cerritos Sea Turtle Rescue ” has had to bury more than 100 turtles that have appeared dead on the beaches, as well as 15 sea lions and 5 dolphins, since neither Acuario Mazatlán nor any other federal authority has been presented to the place after the report.

Thomas Schuss says that in some cases he has waited up to 23 hours for an authority to come, without result.

“ I have seen many dead turtles, I have had to bury more than 100 turtles in Playa Cerritos, 15 sea lions and 5 dolphins, with a dead dolphin I waited 23 hours, but neither Acuario nor Sermanat responded, only lifeguards. The dead animal was there for 23 hours, many tourists told me: Thomas, what’s up. I answered them: it is Profepa, Semarnat’s problem, but nobody answers ”.

He comments that since they cannot touch the nests of the sea turtles that come to the beach to spawn, because they do not have permission, and since they do not have a response from the authorities, all they do is register the place with GPS, in which they use a drone of your property, and clean the area of ​​footprints so that neither animals nor humans prey on the nest.

In this nesting season, Thomas points out that he already has 35 nests registered and that the number is increasing, since in the last trip he registered 4 nests and a day before another 4.

Every year, the Canadian Schuss registers an average of 175 to 200 olive ridley turtle nests on his beach tours, all of which are recorded in GPS (geographic positioner), information that he provides to researchers, marine biologists, and students of the Faculty of Science Mar for its study and thesis integration.

ORIGINS OF THE ASSOCIATION

Thomas Schuss recalls that the idea of ​​creating a legally registered civil association arose more than four years ago, between him and Ana Morris, when they saw the problem of predation of the sea turtle that occurs in Playa Cerritos.

The intention was to obtain a permit and be able to intervene, with the collaboration of marine biologists, since many nests were left in places threatened by tides or high risk of being looted by animals or humans, which can be transplanted to a more protected area in the same beach area.

Currently, the association has 5 members, among them the founders, who are supported by two marine biologists: Jacobo de la Vega and Fernando Enciso Saracho, the latter was in charge of the Tortuguero Camp in Playa Ceuta for 36 years, from 1976 to 2012.

Enciso Saracho, who also founded the Tortuguero del Caimanero Camp in 1986, helps them as a collaborator, in the permit process, as well as advising, orientation and training.

He has a Master’s degree in Fisheries Sciences, which he carried out with a job of accidental capture of turtles by shrimp boats, and although he is already retired as a teacher at the UAS, where he taught the subject of Ecology at the School of Marine Sciences, continues to collaborate as an advisor in the Tortuguero camps of Ceuta and El Caimanero. 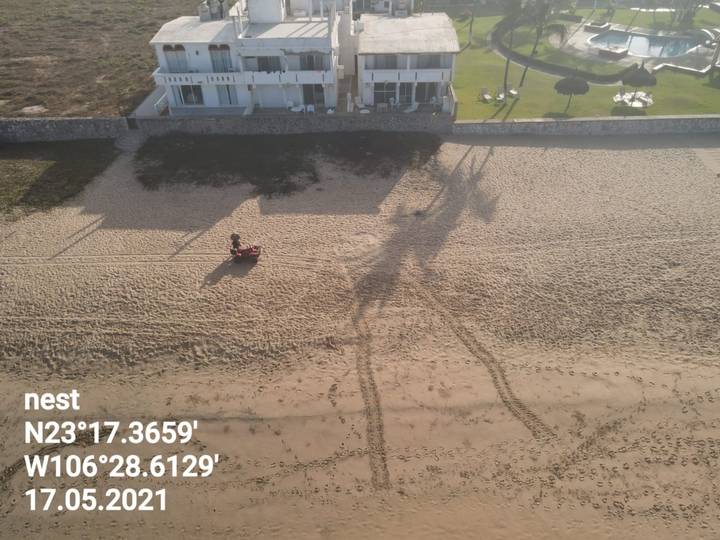 Record of one of the nests in Playa Cerritos, through GPS, in the background Thomas Schuss on his motorcycle.

“ I and Ana work a lot on that, but Fernando has more ideas, he is a marine biologist, he has a lot of experience and he knows everything; I walk the beaches every day for about two hours, in the morning from 7:00 and 8:00, in the afternoon as well, but more in the morning. I talk to Fernando, but I travel on GPS, I have records for three years, I have climbed all the nests, “said Thomas Schuss.

Fernando is the contact of Thomas Schuss so that all this information that he collects with the records through GPS is not lost, but is given proper use in research papers and theses of students of the School of Marine Sciences.

In addition to visiting the beach area every day, 3 to 4 times, to register nests and protect them, Thomas and Ana participate in all the cleaning days that take place in Playa Cerritos, but they do it individually as well. on your daily commutes.

Among the association’s projects is to create a Tortuguero camp in Playa Cerritos so that the eggs from the nests detected by the Aquarium do not have to be incubated in the Aquarium and that the hatchlings are released on a different beach where they were spawned. , as it happens today.

For the marine biologist Jacobo de la Vega, the fact of releasing the offspring in a different area could be negatively impacting the nature of the species since it is known that the adult turtle returns to spawn in the place where it was born, but if nesting was in one place and release in another, you run the risk of creating confusion in it.

” Initially mother turtle arrives and nests where it was born, it is a biology of them that they follow as a pattern, but if from the beginning they change them from the area where they nested and release them elsewhere, there may be a negative effect on their nature, ” he said.

Thomas Schuss assures that as an association they will continue to request permission from Semarnat to be able to intervene and create this Tortuguero camp and have a greater impact on the protection and conservation of this endangered species.

Cerritos Sea Turtle Rescue is a Mazatlan-based not-for-profit organization, working to protect and conserve endangered sea turtles in the city of Mazatlan and surrounding beaches.

We primarily patrol Cerritos Beach, seeking out nesting females and ensuring they can safely lay their eggs.

We also work to educate bystanders on what to do if they encounter a nesting female.

Mazatlan is home to many beautiful beaches that are rich with widlife.

Unfortunately, this wildlife is in danger because of poachers, inadvertent nest destruction, and the impacts of pollution.

Sea Turtles are often at risk, along with whales, dolphins, and birds.

How can I help?

Your donation helps us continue our mission of protecting the wildlife and keeping the beach clean.

If you would like to assist us with our efforts, get in touch at [email protected]