At 70 years of age, the Mazatlan left his fears behind in the middle of the third wave of Covid that paints a worse picture than last year

Mazatlán, Sinaloa.- Regarding the Covid-19 pandemic and the effects it has left on people’s finances, older adults have suffered the most from the economic issue, since many of those who had a job lost it or had to stop temporarily as they are a vulnerable population, which has made it difficult to obtain their daily sustenance.

Don Roberto Flores Rodriguez recently turned 70 years old and celebrates life gladly, since some months was on the verge of doing death to the contract and l coronavirus.

The native of Nayarit, but a Mazatlan at heart, has a history of more than 50 years as a semi-fixed seller around the Pino Suárez market, but for 42 years he has not moved from the corner of Benito Juárez and Leandro Valle streets, where it offers fresh fruit.

Remember that last year, when the social lockdown was announced, you spent several months without working. They were very difficult days without being able to have a source of income.

“They did not let me work until it was fixed a little, I lasted almost seven months. It is suffering, as the saying goes’ one day you can go without eating but for two days? Now seven months that I ventured, battling him,” he recalled.

And although he was able to return to his cart, sales have not been the same as before; the fruit sells little and that is also why he does not order much so that it does not run out.

“There is a lot of fruit, but with the disease that goes around, it is hardly sold, sales are low, we are taking it little by little,” he added.

When it finally seemed that everything was going well, Don Roberto contracted Covid, a few months ago, which took him away from his cart again.

“I got sick, it lasted two months, but I made him want it and I was relieved, I did look bad, but right now, thank God I’m fine, I don’t feel anything, who knows later, but here we are making him want to,” he said.

He mentions that it is a difficult disease to cure, fortunately, he did not have any other condition that would complicate his health, otherwise, he thinks he would not have gotten rid of it.

“I have already been vaccinated, I feel good, of course, one feels more or less here, over the years, because one is no longer young,” he mentioned.

He enjoys his work a lot, he has even learned to live with the bees that come to his post, because of the sweetness of the fruits.

“It serves as a distraction to be here working, at home, I already get angry, because if you are scared, you are just thinking about that, the sooner you are going to get sick, you have to make it feel like it,” he said. 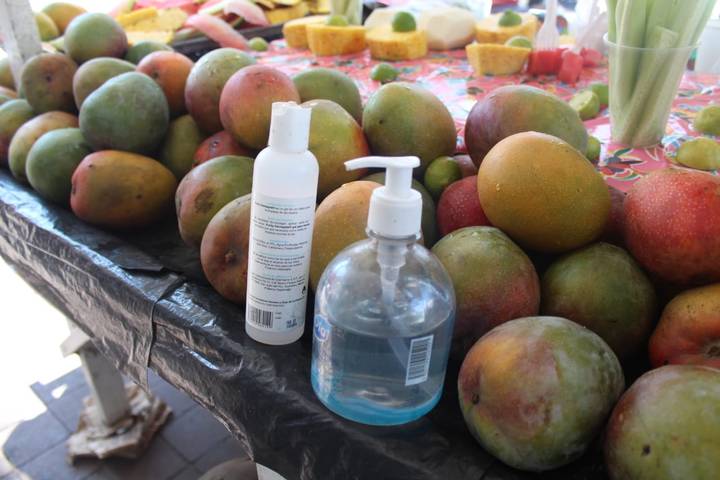 For 42 years he has been selling fresh fruit in the same place in Mazatlán ..

From Monday to Sunday, from noon to 6:00 in the afternoon, he is in his cart on the usual corner, next to the Pino Suárez market. It offers fresh and chopped fruit of the season; mango, watermelon, pineapple, jicama, cucumber; either alone or in combination, you cannot miss the chili powder and lemon.

“People already know that fruit is good for their health, especially in these times. I already have my clients, if someone comes and likes fruit, they come back the next day, or in five days, but they come back,” he said.

Like everything, he added, there are good days and bad days, but the secret is not to give up and be constant, to keep going, despite the fact that the times are no longer the same and that he does not have a fixed salary.

For Don Roberto, it has been very difficult, but not impossible, to get ahead in the midst of the pandemic. It is not that the health crisis due to Covid-19 affects only the harvest of the fruit, but that it also has the latent risk of being infected again with the virus.

However, it is his only source of income and he has to go out every day to find sustenance, so he tries to be well protected with his face mask and having antibacterial gel available to his clientele.

In Sinaloa until July, according to data provided by the Director of Medical Attention of the Ministry of Health, Óscar Garzón López, adults between 70 and 79 years of age are the ones who have been hospitalized the most, a total of 2,847 patients.