With the Covid-19, Rodolfo has had to make modifications in the provision of the service, even now he has to carry out other types of activities

Mazatlan, Sinaloa .-At 39 years old, Rodolfo Velázquez has a decade as a promoter of walks by the bay and the Stone Island aboard catamarans, but as a result of the pandemic of the Covid-19 has had to ” reinvent ” their activity so as not to be left behind in the new normal.

“This Covid is the most difficult thing that has touched us, as we closed for about three months, fortunately it seems that this is already beginning to normalize, for a few months we have had demand from tourists who are arriving at the destination,” he says.

And it is that although the coronavirus continues, the tourism of Durango, Torreón, Guadalajara, Monterrey, Chihuahua, Culiacán, and Los Mochis has responded well in this reactivation.

“Mazatlán is booming, with all the changes it has had and the new attractions and above all because it is not very expensive .”

However, in the new normal, Rodolfo has had to make modifications in the provision of the service, even now they have to carry out all kinds of activities, especially since the competition that exists is very strong, since they still cannot operate at 100 percent. hundred.

He explains that his role is as a sailor, seller and cleaner on ships, because with the Covid cleaning has intensified and health protocols have been established that require more labor and expenses. 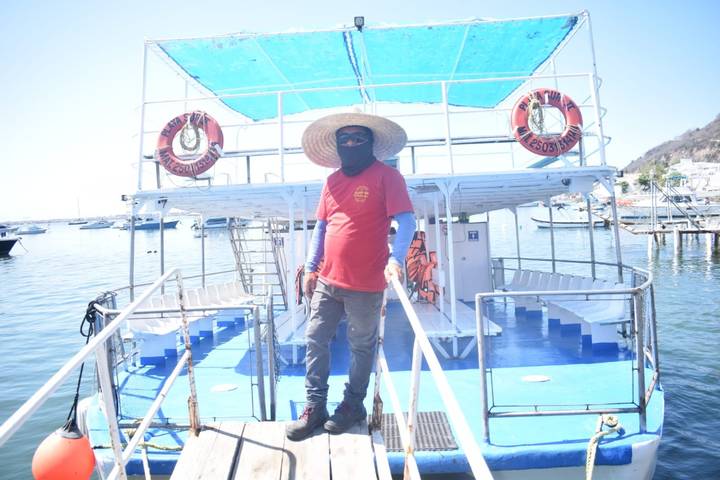 As a result of the Covid-19 pandemic, “El Rodo” has had to “reinvent” its activity so as not to be left behind in the new normal

“The catamaran must be cleaned and sanitized after each trip, we also have a mat, thermometer and antibacterial gel, as well as a capacity of 50% and on the dock the signaling of the healthy distance “, he highlights.

Share that even though they have many repeat customers and a new boat, in these months it has been a bit more difficult to sell a ride, because many exaggerate sanitary measures and others do not want to respect them.

The catamaran rides most of the time include a stay on Isla de la Piedra in a palapa so that the tourist can enjoy the beaches. It can include an open bar or food depending on the package you hire.

“Three walks are made every day, at 10:00 in the morning, at 12:00 noon and two in the afternoon. The walk lasts four and a half hours, it is a journey of an hour and a half, then we take them to the Isla de la Piedra with its food and open bar included and the return “” El Rodo ”, as he is known in the fleet, has dedicated his entire life to providing tourist services, first as a waiter and later as a restaurant deliveryman But what he does now he likes a lot, especially since there is always a way to “move ” a coin.

He admits that recreational activities and nautical tourism were greatly affected during the confinement, as they were unemployed for three months

“In those months, thank God, the company supported us, the boss was giving us 50% of our salary and one was already looking for an extra job on the other hand, to support my wife and two children.”

The workers of the catamarans expect a good summer vacation period because since the epidemiological traffic light is green and the progress in vaccination, they have had weekends where they run out of spaces because the groups make their reservations before arriving at the destination.

And it is that Mazatlán is one of the destinations of the country preferred by national tourists since it has a variety of attractions that can be included in the trip. The rides aboard a catamaran have become one of the favorites of tourists.

During the trip aboard a catamaran, the tourist enjoys sensational panoramic views; the sea touching the sky on the horizon, the bird sanctuary, the sea lions that can be seen in winter, the Lighthouse and its seductive curves or the emerald blue of the waters, among other wonders.