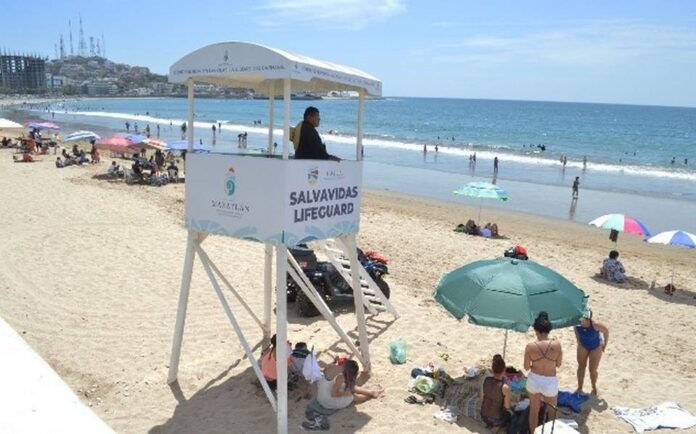 Isla de la Piedra was the area with the most attention provided by lifeguards, fortunately, the situations did not progress to greater, said Gonzalo Magallanes Romero

Mazatlán, Sinaloa.- Elevated sea conditions for two days, in addition to the acceptable behavior of society, which followed the instructions of the Lifeguards and above all took care of itself, it was feasible for the reduction of interventions and white balance on the beaches of the port, highlighted the commander of the Aquatic Squad.

Gonzalo Magallanes Romero reported that the area with the highest number of assistances was registered in the Isla de la Piedra during the course of Sunday, there were two multiple rescues of people with difficulties to get out of the sea, in total in the days of Holy Week the statistics reflected 14 rescues, the presence of jellyfish and stingray attacks were minimal.

“The people behaved, we did everything that is on our part in the sense of water rescue because it went well for us, we did our job; In the beach area, as far as I’m concerned, we have a white balance, 14, the strongest we had were on Isla de la Piedra ”.

The traffic lights were essential to keep the accounts of the people in Beaches that most were in orange, except in sectors that due to waves, the entry to the sea was restricted, with respect to the withdrawal of people at the indicated time of withdrawal, the Lifeguard chief ruled out altercations with society.

The lifeless body rescued by elements of the Navy was out of the knowledge of the Aquatic Squad agents, they did support the search, but the diligence was carried out by Navy and Prosecutor’s Office personnel, Magallanes Romero stressed.