Cacaxtla is an archaeological site located near the southern border of the Mexican state of Tlaxcala. It was a sprawling palace containing vibrantly colored murals painted in unmistakable Maya style.

The nearby site of Xochitecatl was a more public ceremonial complex associated with Cacaxtla.

Some of the amazingly well-preserved murals at the Cacaxtla archaeological site in Mexico. 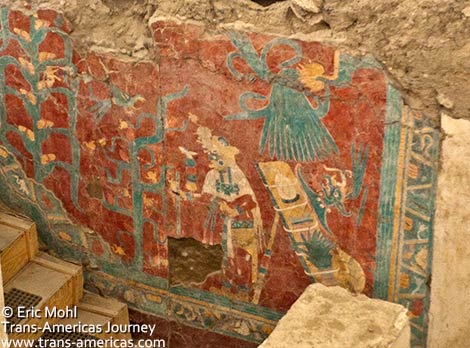 Cacaxtla and Xochitecatl prospered 650-900 CE, probably controlling important trade routes through the region with an enclave population of no more than 10,000 people.

Some of the amazingly well-preserved murals at the Cacaxtla archaeological site in Tlaxcala, Mexico, allow us to admire the great talent of the artists that expressed so well through painting. 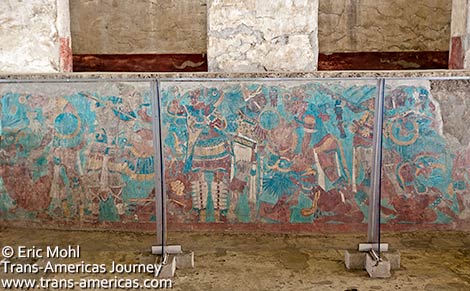 Cacaxtla was the capital of region inhabited by the Olmeca-Xicalanca people. The origins of the Olmeca-Xicalanca are not known with certainty, but they are assumed to come from the Gulf coast region, and were perhaps Maya settlers who arrived in this part of central Mexico around 400 CE.

The term “Olmeca-Xicalanca” was first mentioned by Tlaxcalan historian Diego Muñoz Camargo at the end of the 16th century. This historian described Cacaxtla as the principal settlement of the “Olmeca”, although what we today refer to as the Olmec culture ended ~400 BCE, that is, almost 800 years earlier.

After the fall of the nearby city Cholula (ca. 650 – 750) — in which the Cacaxtlecas might have been involved — Cacaxtla became the hegemonic power in this part of the Tlaxcala–Puebla valley. Warriors from Cacaxtla appear to have taken over Cholula for a time, but they were ultimately expelled by the Toltecs. Its ascendancy came to an end around 900 CE and, by 1000, the city had been abandoned.

Some of the amazingly well-preserved murals at the Cacaxtla archaeological site in Tlaxcala Mexico occupy a space larger than a football field. 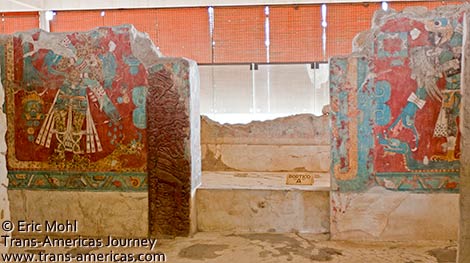 Cacaxtla is located 40 minutes from the town of San Miguel del Milagro, Tlaxcala . The closest airport is Puebla, which is 25 minutes away. If you go by car from Mexico City, take highway 150 Tlaxcala – Mexico and exit at the deviation towards San Rafael Tenayecac.

The Cacaxtla-Xochitecatl Archeological Site is open:

Buy tickets in advance on Tripadvisor. If you book with Tripadvisor, you can cancel at least 24 hours before the start date of your tour for a full refund.

New Malecon in Teacapán Sinaloa will be of high quality