The head of the capital government, Claudia Sheinbaum, announced that after meetings with federal authorities and the State of Mexico, a timetable was set to expedite the loading of fuel in the Valley of Mexico.

At a press conference, he explained that the vehicles with 9 and 0 plates and blue rubberized finish would be supplied on Mondays; those who have finished 5 and 6 and gummed yellow, would do so on Tuesdays; the motorcars whose registration ends in 7 and 8 and gummed rose, would load on Wednesdays; those of completion 3 and 4 with red rubber would be supplied on Thursdays, while the cars with plates 1 and 2 and green rubber finish would go on Friday to the gas station.

Later, in his Twitter account, Sheinbaum clarified that it is a suggestion to load fuel in an orderly manner. 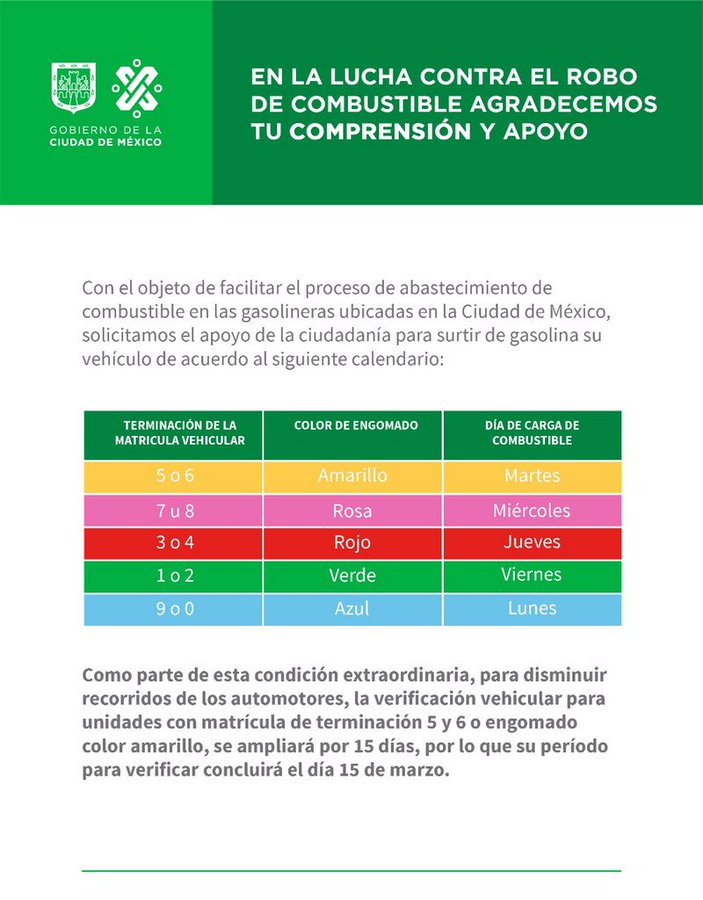 The capital city president warned that sanctions will be applied as fines and preventive prison for resale of gasoline and announced that it will be extended until March 15 the vehicular verification for the vehicles whose completion of plates is 5 and 6 and rubberized yellow, in order to avoid ranks and agglomerations.

He assured that the coordination with Petróleos Mexicanos (Pemex) continues to normalize the supply as soon as possible and announced that priority will be given to transporting the pipes that transport gasoline to supply the service stations.

Sheinbaum Pardo ruled out giving a specific date for the normalization of the service, but guaranteed the operation of public transport in Mexico City, so that means such as the Metrobús and the buses of the Passenger Transport Network will not have problems to operate.

He announced that elements of the Secretariat of Public Safety will continue to monitor the service stations, in order to avoid crime and speed up mobility in the vicinity, while the Locatel system will be reinforced with 45 operators, in order to provide more efficient service in the task of informing the population about the supply of fuel.

The head of government warned that gas stations will restrict the sale of gasoline in containers, so it will not be sold to those who carry utensils that violate security measures.

He also denied that there is any justification for the increase in basic products and the tariffs of the concessioned transport, specifically the microbuses, since most of these operate on LP gas.