The president of Formula 1, Chase Carey, commented: “The Mexican race is one of the highlights of the championship.

Although the new administration considers the continuity of the Formula 1 Grand Prix in our country once the current contract ends in 2019, it continues to make history and is once again named the best Grand Prix of the season by the International Automobile Federation. (FIA).

This appointment is of great importance to be the only one who has managed to be for four years in a row as the best of the circuit. A milestone that had not occurred in the almost 70 years of sports history, where a Grand Prize was named “Best Event of the Year” consecutively so many times. 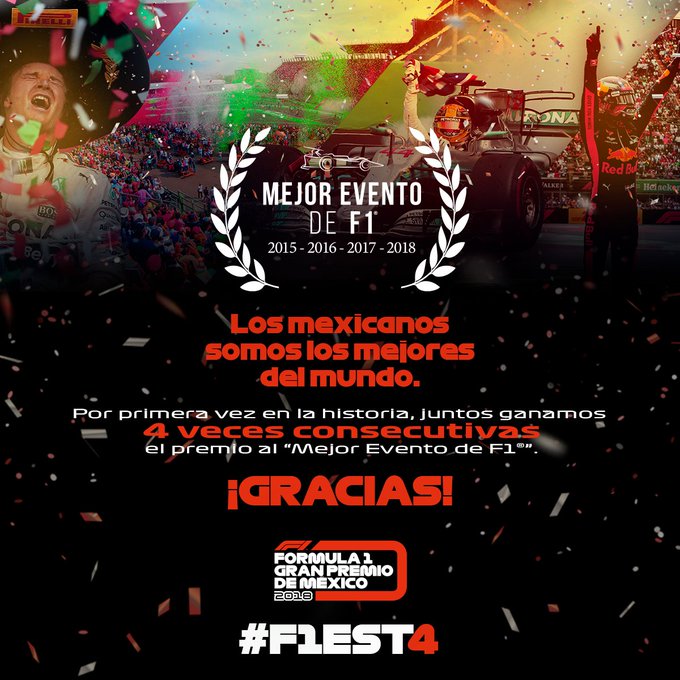 The president of Formula 1, Chase Carey, commented: “The Mexican race is one of the highlights of the championship. We are very proud of the F1 ® alliance with Mexico and we are excited to continue working together. “

The award was received by Alejandro Soberón Kuri, President and General Director of the Board of Directors of CIE, who also received the award for “Best Promoter of Formula 1” awarded to his company.

The award ceremony took place during the traditional International Automobile Federation (FIA) Awards Gala, held in St. Petersburg, Russia, and in which the best of motorsport is recognized worldwide.

In a communiqué issued by CIE it was declared “this historic achievement has been possible thanks to the joint work”.

Appreciating the support and work of each of the participating entities, making the name of Mexico once again at the top of the world demonstrating that, “with the combined efforts of all sectors, both public and private, and the best hobby of the world, in Mexico, you can achieve great things. “

Sergio “Checo” Pérez also expressed his pride and admiration for this award won by this event, encouraging all Mexicans to achieve in 2019 the fifth consecutive.