José Carlos’s biggest dream, in addition to being a professional singer, is to meet the vocalists of the MS Band in person.

Mazatlán, Sinaloa.- An accident, when he was still a baby, left José Carlos Benítez Cárdenas in a wheelchair, today a 20-year-old young man from Mazatlán whom hundreds of tourists and locals have surely heard him sing on the Malecón.

He says that he has been singing there for two years in front of the Carpa Olivera pool, but his love for singing was discovered when he was about 15 years old.

” Of pure pleasure I would catch myself singing at home, as a hobby, I never imagined that this would happen,” he said.

He is the only member of his family who sings, he has a cousin who is a musician and plays the clarinet, he also instructed him in his early days; remember that at that time only about five songs were known.

“I knew only five songs and right now I have a repertoire of almost two hours, ” he recalled.

As a good Mazatlan, he likes band music a lot, his favorite group is the MS Band and his favorite song is ” El color de tus ojos “, the same theme that he interprets with great feeling. 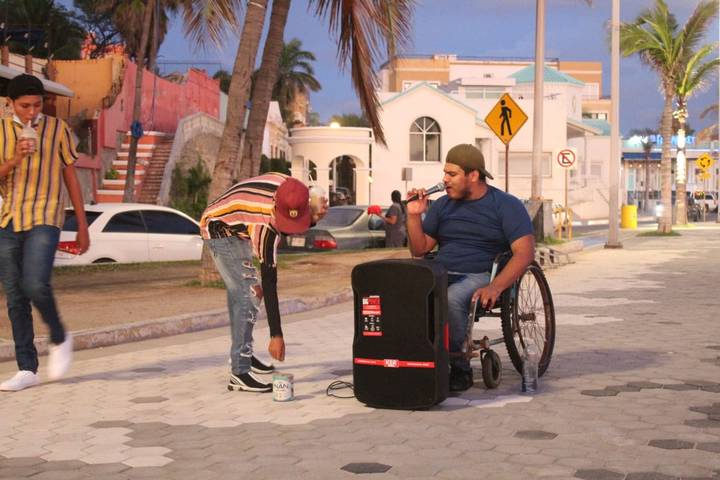 Although he has attended several concerts of the band, he always has to see them from afar; his biggest dream is to meet them in person and perform a song together.

” Yes I have gone to their concerts but it gets very crowded and I stay behind, it would be my great dream to meet them, sing with them and one day be a great singer, ” he said.

He mentions that he has never had the opportunity to take singing classes, so on the YouTube platform he watches tutorials on how to tune his voice; however, it is something that you would also like to do a lot, as well as at some point return to your academic studies.

” I’m making him want to, it’s my plans to keep singing until I can’t do it anymore, ” he mentioned.

In each performance, the nerves are present, almost like the first day, but thanks to the support and acceptance of the people, little by little he gains confidence and leaves them behind. 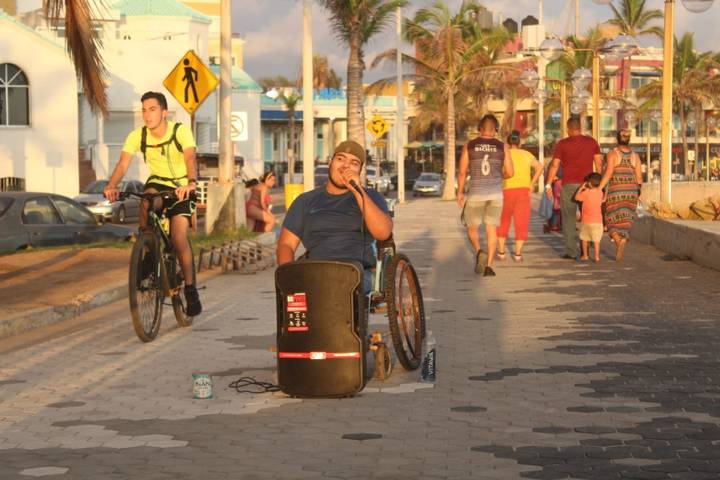 ” Yes, singing in public is scary and here on the Malecón, you don’t know if people are going to like it if they are going to support you, but here we are pushing it forward, everything forwards, ” he said.

In social networks he became known for his interpretation of “El corrido de Mazatlán”; on one occasion a person from the port recorded it and uploaded it to Facebook, inviting locals and tourists to support José Carlos.

” I never believe myself more than anyone, nor do I want to pretend what I am not because I am a humble, simple person, ” he said.

José Carlos points out that his condition has not been an impediment to doing what he likes the most and what he does best, he always tries to stay with a positive attitude.

” I really wanted to, from time to time I do get agüito, but nothing happens; here I am always simple and nothing stops me,” he said.

When the Covid-19 pandemic arrived and with it the social confinement, he lasted three months without working; Now in the new normal, he confesses that the tips are no longer as they were before, but he has to learn to work and stay constant, be it good or bad days.

” I come to earn a living like anyone else would, with this Covid thing went down, but blessed God we are going to return with everything, ” I assure.

From Tuesday to Sunday, from 6:30 in the afternoon to 8: 0 at night, José Carlos goes to sing at the Malecón de Mazatlán, his favorite place; on Instagram and YouTube they find him as “El Sunset de Sinaloa, el original” and on Facebook as José Carlos Benítez Cárdenas.