MEXICO CITY (AP) — Tens of thousands of prospective students hoping to get into Mexico’s largest public university on Wednesday began taking the notoriously competitive entrance exam for the National Autonomous University of Mexico, better known as the UNAM. 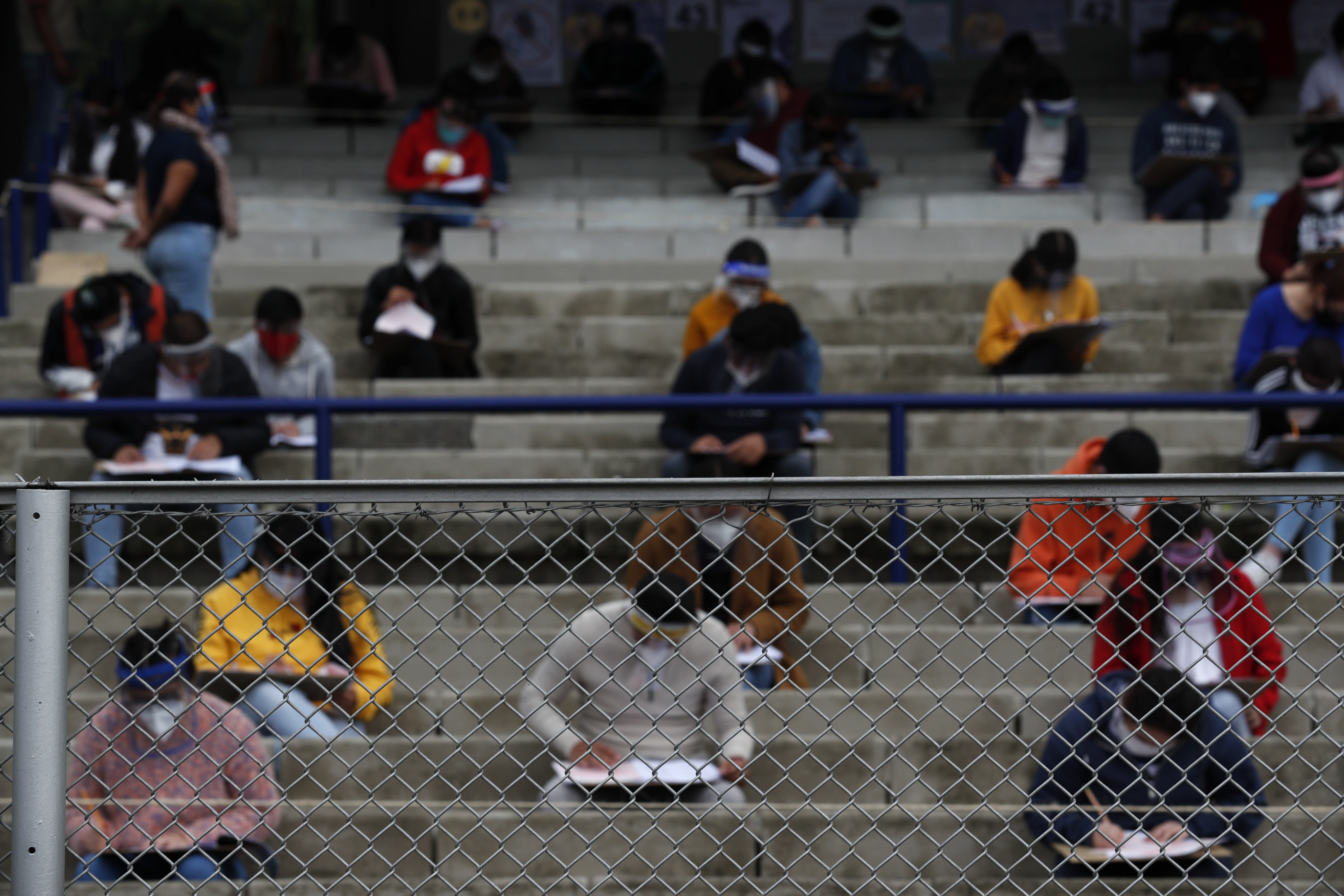 Prospective students are seen through a fence as they take the entrance exam for Mexico’s National Autonomous University in the stands of University Olympic Stadium, amidst the ongoing coronavirus pandemic, in Mexico City, Wednesday, Aug. 19, 2020. More than 2,000 hopefuls registered to take the exam at the stadium, where it was being offered for the first time, and more than 80,000 aspirants were registered nationwide to take the exam. (AP Photo/Rebecca Blackwell)

Held each year, it’s the exam of a lifetime and and an annual rite: Only about one in 14 students will get into the undergraduate degree program.

It was an unusual scene due to the coronavirus pandemic. Lines of students wearing face masks and face shields sat at a safe distance from each other on the concrete seats of UNAM’s soccer stadium. Of the 84,000 students taking the exam, only 5,993 will get in.

It was also a lonelier scene than usually: The throngs of parents and entire families that normally accompany the students and hover outside for solidarity were told by the university to stay home to avoid crowds that might spread the coronavirus. 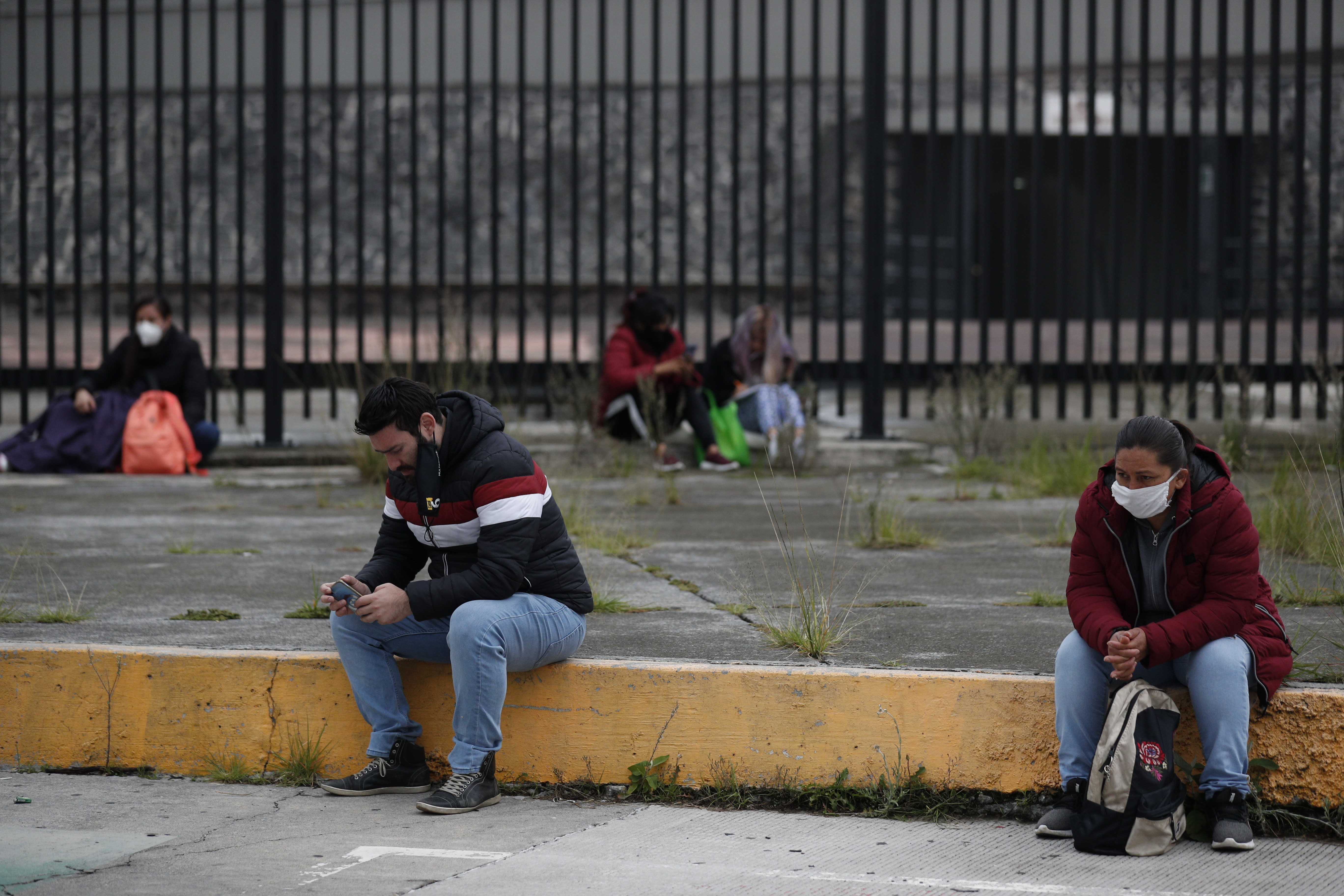 “Some did come, but outside the stadium there is a big enough space so that they could keep a safe distance,”said Macarena Blando of the UNAM press office.

While the UNAM is planning to hold most classes online or at-distance in the upcoming semester, university authorities decided that the strict security measures needed for the entrance exam — no papers, no talking and no cell phone or electronic devices are allowed during the exam — required in-person testing.

Some schools in Mexico are experimenting with taking exams by Zoom or video calls, where docents can observe test-takers to make sure they’re not cheating. But such is the importance of the national university test — and the anger over scandals in the past over alleged cheating or exam questions leaking out beforehand — that the university made students show up in person.

Students lined up at a safe distance and were allowed into the stadium one by one. Each exam-taker — some take the annual exam two or three times before passing — entered with just a pencil and photocopies of their ID; each had his or her temperature taken and was given hand sanitizer gel. 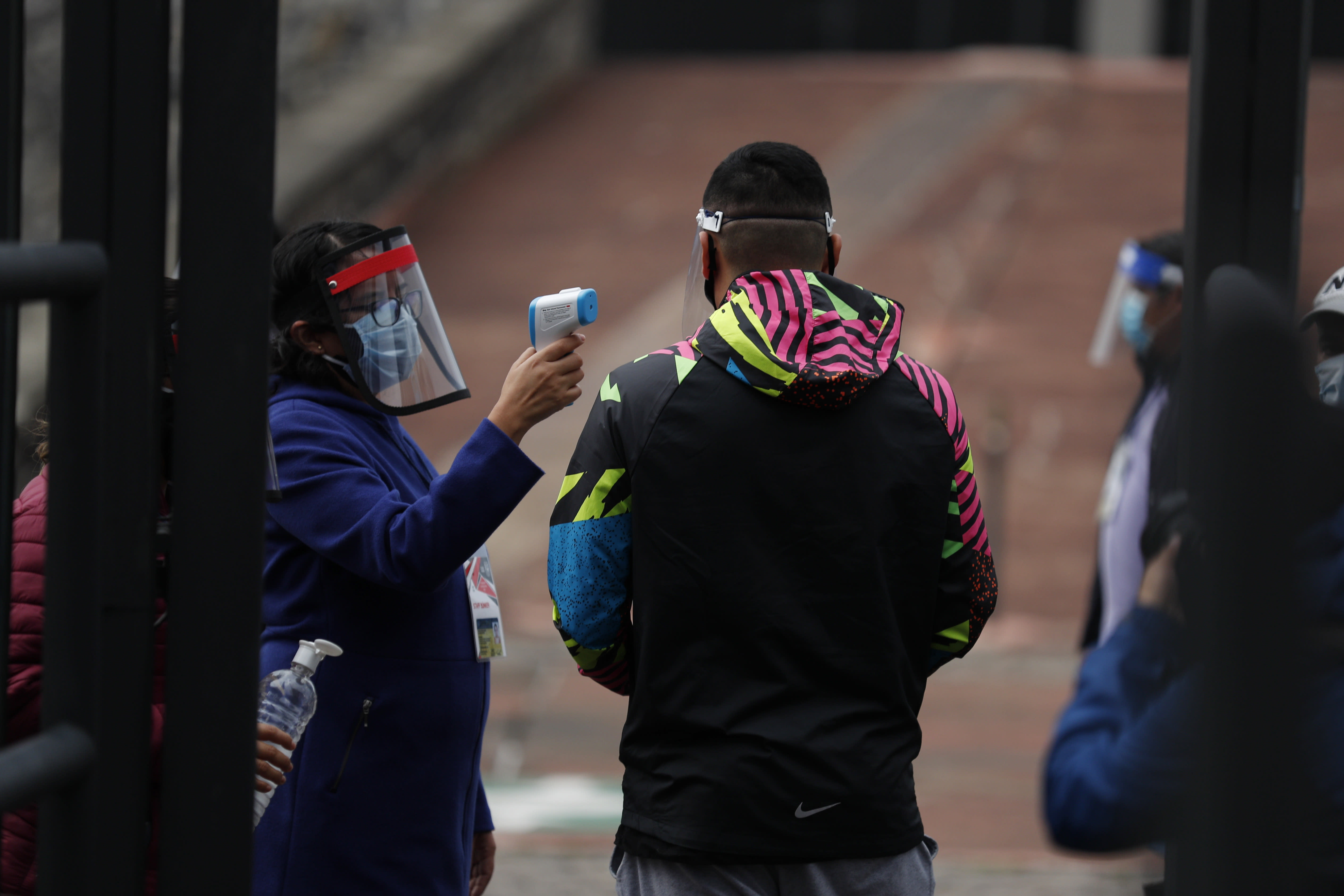 It was decidedly low-tech: Each exam-taker held a board on their knees and filled out a paper copy of the exam, which has 120 questions. The students will be on tenterhooks until results are released on Sept. 21.

“It’s harder to concentrate, to be comfortable, with the face shield and the face mask and everything,” said Jazmin Arriaga, 17, who wants to get a pharmaceutical degree. “But the hard part is mainly the test.”

The surreal scene — a huge sports stadium with thousands sitting about 6 feet (2 meters) from each other in complete silence — reflected the sheer scale of the UNAM’s main campus on the south side of Mexico City.

The 435-acre (176 hectare) main campus serves about a quarter-million undergraduate and graduate students.

It was the first time in recent memory the UNAM’s enormous Olympic Stadium had been used for the test, in part because experts say its harder to spread the virus in an open-air setting — and the first time the stadium had people sitting in the bleachers since the pandemic hit Mexico in March. While professional soccer matches have resumed in Mexico, they are all played in closed stadiums with no spectators.

Even so, with social distancing, not all could fit into the stadium and many will be tested on other days.

Less orderly crowds occurred over the weekend when exams were held at sites across the city for the chance to enter high schools affiliated with UNAM and other universities. Police blocked streets in some places to cope with the throngs.

Those exams have been the door to a better life for generations of working- and middle-class youths. If they are accepted into the UNAM’s high school program, they are assured entry into the one of Latin America’s most prestigious universities if they can maintain decent grades.

For many in this nation of almost 130 million, the nation’s foremost university is also their only hope of a college education. The UNAM charges annual tuition equivalent to only about $9 per student, a fee that hasn’t been updated since the 1960s and which comes nowhere near covering the cost of their education. The government heavily subsidizes the university.

Attempts in the past to update the university’s fee structure have been met by student strikes and campus takeovers that lasted for months.

Sinaloa Secretary of Health reports an increase in influenza cases

Cyclists who travel from Argentina to Alaska are received in Mazatlan

Affordable Places To Retire in Mexico