Two cold fronts put Mexico on alert, a new drop in temperature and possible snow or sleet fall is expected in the northwest of the country.

The cold front 21 will extend over the east of the Yucatan Peninsula, favoring showers with strong point storms in the Mexican southeast and the Peninsula.

The associated air mass will maintain a cold environment in the morning and night in the center and southeast of the country, as well as a “North” event with gusts of over 60 km / h in the Isthmus and Gulf of Tehuantepec. 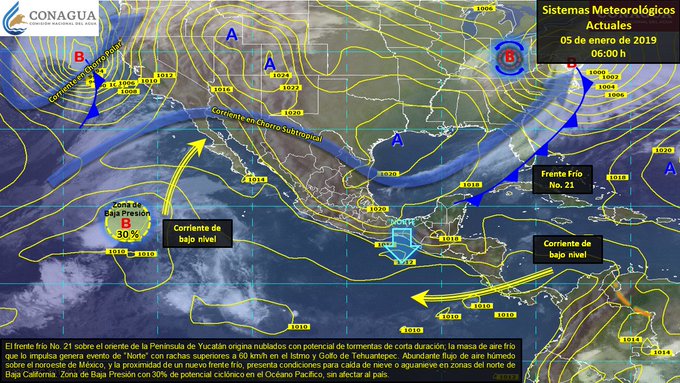 The front is expected to gradually enter the Caribbean Sea, ceasing to affect the country. On the other hand, strong entry of moisture from the Pacific Ocean to the northwest of Mexico, combined with the approach of the new cold front 23, will cause clouds and rain in said region, as well as conditions for falling snow or sleet in the Sierra de Baja California (La Rumorosa).

Valley of Mexico: Partly cloudy sky. Presence of mist in the course of the day. Cold environment during the morning and night and possible frost in high areas. North component wind from 10 to 25 km / h. In Mexico City, a maximum temperature of 23 to 25 ° C and a minimum of 7 to 9 ° C is expected. For the State of Mexico, maximum temperature of 21 to 23 ° C and minimum of -1 to 1 ° C.

North Pacific: Partly cloudy sky with intervals of showers in Sonora and isolated rains in Sinaloa. Cold and windy west and northwest weather from 20 to 35 km / h.

South Pacific: Cloudy skies with strong point storms in Oaxaca and Chiapas, as well as isolated rains in Guerrero. Fog banks in mountain areas. Warm atmosphere during the day. “North” event with gusts of over 60 km / h in the Isthmus and Gulf of Tehuantepec (Oaxaca and Chiapas).

Gulf of Mexico: Cloudy sky with potential for strong point storms in Veracruz and Tabasco. Banks of fog over saws. Winds from the north and northeast from 15 to 30 km / ha along the coast.

Yucatan Peninsula : Partly cloudy skies with intervals of afternoon showers in the region. Warm atmosphere during the day and wind from the north and northeast from 10 to 25 km / h on the peninsula.

Mesa del Norte : Partly cloudy sky in most of the region. Isolated rains in Chihuahua. Very cold environment in the morning and evening with frost in mountain areas and northwest wind from 15 to 30 km / h.

Central Table: Partly cloudy sky with isolated rains in Puebla. Cold environment with fog banks during the first hours of the morning, and temperate environment during the day. Winds of variable direction from 20 to 35 km / h.

How many marijuana plants can I grow in the backyard? Mexican Senate must approve by December 15th

Mexico is among the 10 wealthiest countries in the world