In Mexico the Southwest and for many Mexican-American families, Christmas time means tamale-time.

They are eaten all year, but during the holiday season, which for Mexicans extends from the Feast of Our Lady of Guadalupe on Dec. 12 through Three Kings’ Day on Jan. 6, they are a culinary requirement, like Christmas cookies. 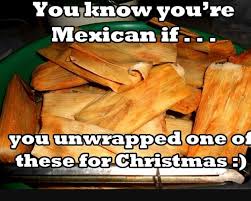 In Mexico, the most traditional tamales are made from pork or chunks of beef, though chicken (leg meat, preferably; the breast can be too dry) is also popular. In the southwestern state of Oaxaca, tamales are wrapped in plantain leaves and filled with chicken and onions flavored by mole negro, a sauce of poblano peppers, and chocolate. In Tabasco, on the Gulf Coast, they are filled with garfish.

Tamales are a tasty package of meats, cheeses, or vegetables in a corn-based shell all wrapped up in a corn husk and steamed.

Tamales have been eaten in the Americas for a long, long time. They originated in Mesoamerica and date back thousands of years. The portable food was eaten by Olmec and Toltec hunters, travelers and soldiers, and later by the Aztec and Maya. There’s evidence that the Inca of South America even ate tamales.

So why tamales at Christmas?

There are several theories about why this food has become so identifiable with the birth of Christ.

Corn was a very important crop in Mesoamerica, with people believing that people were created from corn. Tamales, because they were wrapped in corn husks, became part of ritual offerings. As a nod to those times, people prepare tamales for special occasions including baptisms, weddings, Dia Del Los Muertos, and, of course, Christmas.

Tamales can also be seen as a symbol of the Virgin Mary, carrying in her the baby Jesus or a mother carrying a future life, especially if the tamale contains an olive.

Making tamales is labor-intensive, so often many are made at once, and families and friends are invited over for a day – or more – of togetherness and tamales.

You cannot miss the Second Edition of the Mazatlan Agave Festival 2023!

How are gasoline prices in Mexico this February 1