Supreme Court establishes jurisprudence that will allow cultivating and consuming marijuana in Mexico for recreational purposes.

The Supreme Court of Justice of Mexico established jurisprudence that will permit cultivating and consuming marijuana in that country for recreational purposes to those who request permission from the Federal Government.

With four votes in favor and one against, the first room of the Supreme Court granted the fifth amparo for the recreational use of marijuana in Mexico, which established jurisprudence. 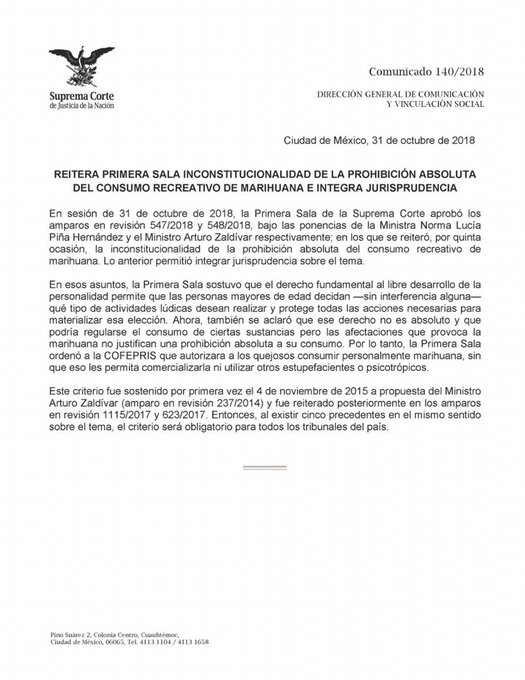 “By reiterating criteria (jurisprudence) is already mandatory for all federal and local courts, an important step for its legalization,” Francisco Burgoa, professor of constitutional law for UNAM, explained in his Twitter account.

However, the Court’s approval does not allow the sale or distribution to third parties. “The declaration of prior unconstitutionality does not imply authorization to carry out acts of commerce, supply or any other that refers to the sale and/or distribution,” the project states.

Likewise, it establishes that “this right may not be exercised against minors or in public places where third parties are found that have not given their authorization.”

The local newspaper El Financiero explains that said authorization would include the acquisition of seed, as well as planting , cultivating, harvesting, preparing, possessing and transporting marijuana, its resin, preparations and seeds.