The figure is unusual and extraordinary. In its first four and a half years, Enrique Peña Nieto’s administration spent more than 2 billion pesos on tuna tins! Already in that time, the government of Felipe Calderón spent more than 600 million pesos spent on that same product during his entire six-year term.

At what point did tuna become a national priority? Diconsa says it is to supply their stores and offer tuna cans at a more affordable price.

However, there are many things that arouse suspicion that this frenzy of tuna purchase hides another case of businessmen close to the president of Mexico who is benefited by the public budget. The story of #GananciaDePescadores, Mario Gutiérrez Vega’s research, is presented today simultaneously at Sin Anesthesia, the morning newscast in my charge at Grupo Radio Centro.

Two thousand million pesos in tuna and 70 percent of that money fell in two companies that received the resources without having participated in any tender or public tender. These are Pinsa Comercial and Marindustrias, which control 47 percent of the national canned tuna market. The rest of the awards, 30 percent, Diconsa distributed among 12 other tuna companies.

According to information obtained by the journalist via the Transparency Law, between December 1, 2012 and September 10, 2017, the parastatal company, which reports to Sedesol, signed more than 2,000 direct contracts! with Pinsa to buy tuna cans. This consortium touched 795 million pesos. This amount is triple the purchases of cans made to Pinsa companies in the previous administration.

Pinsa Comercial is owned by entrepreneur Eduvigildo Carranza Beltrán, who also owns Estrella del Mar Golf and Beach Resort, a tourist complex with a golf course and more than 5 kilometers of beach that Enrique Peña Nieto has visited on several occasions as president of the Republic. In 2016 he was three times at this hotel in Mazatlan: January, August, and December, on New Year’s Eve. On that trip, the General Staff spent 91 thousand pesos of the treasury in lodging and consumption within Estrella del Mar.

The businessman Carranza Beltrán presumes his closeness to Peña Nieto. In February 2017, the first president personally handed him the National Agrifood Award and in November 2013 the National Export Award to his company Maz Industrial. At the ceremony, publicly, there was an exchange of praise and affection. 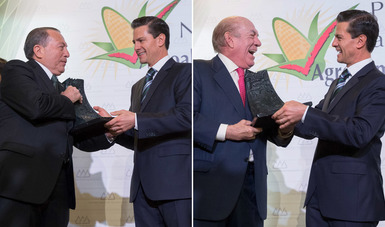 The second company privileged by Diconsa in the purchase of canned tuna is Marindustrias, owned by Antonio Suárez Gutiérrez. In this administration, Marindustrias has received more than 1,400 contracts that together exceed 673 million pesos, triple that in the previous administration. Peña Nieto has publicly declared his friendship with Suárez Gutiérrez, who in 2017 received the National Agrifood Award from the President’s hands.

Who has headed Diconsa in this questionable period? A Mexican PRI political operator, Héctor Velasco Monroy: he came with Rosario Robles to Sedesol, he left during Meade’s administration, he returned with Luis Miranda and he left again to compete for a deputation that he lost. It was in the 3rd district. The one in Atlacomulco, State of Mexico.

By CARLOS LORET DE MOLA
Carlos Loret de Mola was born in Mérida, Yucatán, México, in 1976. He has a
degree in Economics from the Instituto Tecnológico Autónomo de México
(ITAM).

The best 5 plagiarism checkers we found on the internet