The artist is one of the most fervent promoters of the Mayo-Yoreme tradition in Sinaloa.

Culiacán, Sin.- Life is a course that must be used by humans to generate positive teachings about the new generations of society, for Leonardo Yañez Juárez, we are all eternal despite death and before that, his mission It has been to promote the Sinaloan culture as a legacy, but especially Yoreme.

For this, he has prepared all his life: to personify the man of the deer dance, the mythical paskola of the original peoples of the Mexican northwest or, hunters who had a cosmogony of respect for nature.

The son of a woman originally from a Yaqui indigenous town in Cajeme, Sonora, he makes part of this culture run through his veins that for years has gone unnoticed in Mexico and in the world, this being one of the causes that would drive him to investigate and promote culture and art.

In an interview for El Sol de Sinaloa, Leonardo shared that personifying “El venado” is a circumstance derived from a life in the periphery, since having lived on the outskirts of the city of Culiacán, led him to take refuge in dance classes to not belong to the world of alcoholism and drugs.

“I saw it as a refuge, I felt that I did not belong there, but I did know that I wanted to investigate that I wanted to dance because my life always revolved around art, I held on to the Yoreme culture and that family influence of my mother in Cajeme and Because of that cultural influence that arrived there and told me through them festivals, here is also this option, not only can you be a graffiti artist or a drug addict, you can also be a dancer, “he said.

At the age of 12, he was enrolled in a children’s dance group belonging to the DIF of Culiacán and from there, he embarked on a course of preparation, effort, love and dedication for the promulgation of dance, later he came to study at the Higher School of Sciences and Artes Mukila Mazo where he trained as a teacher and promoter. 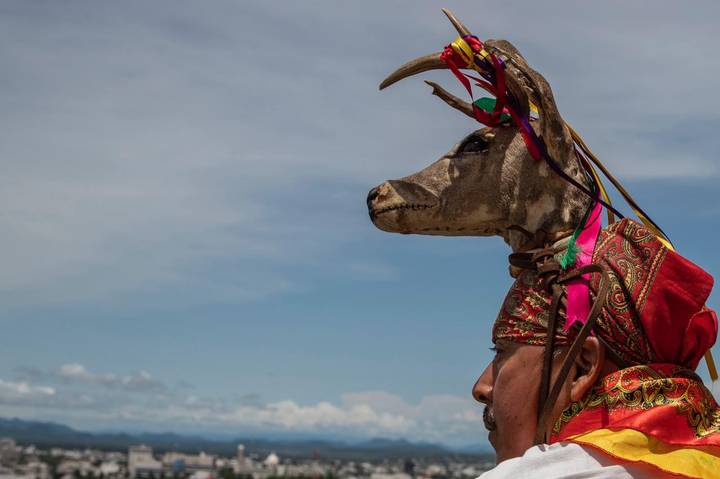 Because of his love of culture, he interned for several months in indigenous communities.

He fell in love with this culture so much that he interned for several months in the Mayo-Yoreme communities of Sinaloa, where he was sponsored and baptized to finally be accepted as one of the community.

There he learned that not everything we see in personifications or choreographies is what exists in indigenous peoples, because today they suffer from violence, prostitution and addictions, therefore, he has also fought to defend the rights of indigenous peoples, an action that derived its foundation; Center for Artistic Initiation and Analysis of Mayan Customs.

Leonardo Yañez Juárez has more than 40 years of promoting this culture by dancing like a deer in different squares, parks and stages of local and national stature.

He has left his teaching to students as a legacy and has captured his long journey in a book.

These are the years that Leonardo has been defending this tradition of the original peoples.

She was years old when she began to study dance in Culiacán.

On August 9, at the international level, the day of indigenous peoples is celebrated, in commemoration of their existence and the struggle for the defense of indigenous rights.

From fire to water! Julio, David, and Ramón, heroes of Culiacán; save two lives in record time

By order of AMLO, Castañeda will remain as chief of Sinaloa Public Safety

Almost all crimes in Sinaloa is down, but robbery grows 46%