Mazatlán, Sinaloa.- Surfing has been a sport associated mainly with men, but in recent years, more and more women are encouraged to practice it.

Alexia Ceballos Echeagaray 28, from a very young age, practiced various activities such as dance and sports such as volleyball, basketball, soccer, and skateboarding, but nothing gave her the satisfaction and feeling that surfing gives her. 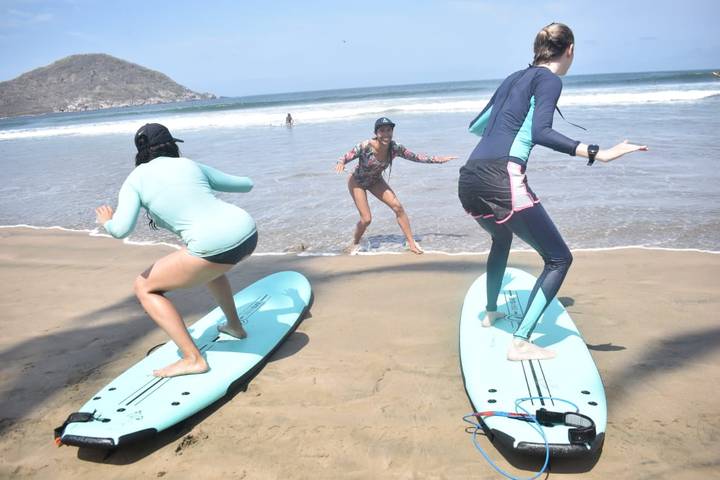 At 28 years old, the young woman is a master of surfing

It was at 17 when for the first time, on a family trip to Puerto Escondido, Oaxaca, she took two classes and from there she fell in love with this sport and decided to practice it in Mazatlán.

Remember that when you “surfed” your first wave, you knew immediately that you wanted to do it for the rest of your life, it is a feeling that does not give you anything, although your mother was not convinced at first, today she regrets not having supported her since younger.

“My mother did not want me to surf, because it was for lazy people, she said, then she understood that she must have supported me from a very young age, because the truth was, there was a future, but to start very big it was already more difficult.”

It never passed through his mind that a year and a half later her life was in extreme discipline, it was her dedication and perseverance that allowed Alexa to breakthrough. 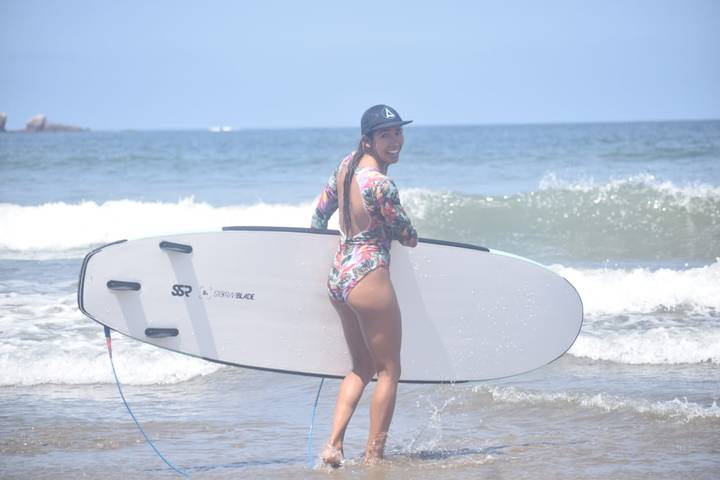 “At first it was like a hobby to which I dedicated hours and hours of my time, then I started to go on trips, I started to like competitions and because they were pushing me to improve and train harder, I liked it a lot, but above all, I was able to overcome my fears, that was a great challenge ”.

She shares that at first, she was afraid of the sea, it terrified her, in addition to being seen surfing, but she wanted to overcome those fears, it is not only about practicing sports but everything that is learned: patience, perseverance, perseverance, and discipline.

” It is a way of practicing patience every day, understanding that not only you have control, a lot of adaptabilities because it is what the sea gives you, but it also is never the same, it is always changing and you have to adapt to what there and have fun in the whole process ”.

Her dedication, passion, talent and energy gave him the opportunity to “ride” waves in various parts of the world, as well as win the State Championship five times, in addition to representing Sinaloa in international tournaments.

Her participated in 15 competitions, represented Sinaloa in Rosarito, Baja California; Pascuales, in Colima; Zihuatanejo and Mazatlán, she was also in international competitions in Puerto Escondido, Acapulco and in California.

It was in 2012 when he began to teach surfing in the United States and a year later he did it in Mazatlán, while she continued competing and doing other activities. It was in January 2021 when Lexie Surf Academy finally opened, with three students, and today it already has almost 20, mostly women.

Alexia studied business and is currently studying Marketing. She likes to prepare herself, but surfing has always been her “first love”, ever since she tried it, and she never thought she was going to dedicate herself fully to this activity.

Practicing and teaching this sport has given her many satisfactions in his life, obviously, she would like to have more women in the water, but she is also very interested in children, because there are many possibilities for them, especially since surfing is already an Olympic sport and Mexico has a good future for that.

“I have an 8-year-old girl, even a woman over 50, the range is very open, I have many mothers, single women, girls and boys, there are those who already have a level, but want to advance because there are details that they did not recognize that they did wrong and that’s where I come in, it’s something that you have to work on constantly because surfing is a very jealous sport in the sense that you have to be very constant to move forward. If you come once a month, you will never learn ”.

It is necessary that more women are encouraged

The young woman from Mazatlán points out that many of her students need to make themselves known and that there are also more girls who dare to challenge their limits and enter the universe of the waves.

“There are not many women who practice it, I invite you to dare, it is much safer and fun than you think, they make many friends, they meet people from all over the world, the truth is, there are not many women who dare to compete and I always direct them to that and I think that there we go, little by little, we are more and more women in the water, taming the waves. “

Her goal is to continue preparing high-performance athletes, she wants her students to surf very well and to participate in the Olympics.

Mexico has world-class wave quality, only in Puerto Escondido you can surf waves up to five meters high and people from all over the world come just for that.

“And in the case of the port of Mazatlán, it is a good place to learn surfing, since it has several excellent spots to practice this sport, from Playa Brujas to Isla de la Piedra .”

Alexia studied business and is currently studying Marketing, but surfing has always been her “first love” and now she feels fulfilled by dedicating herself fully to it.