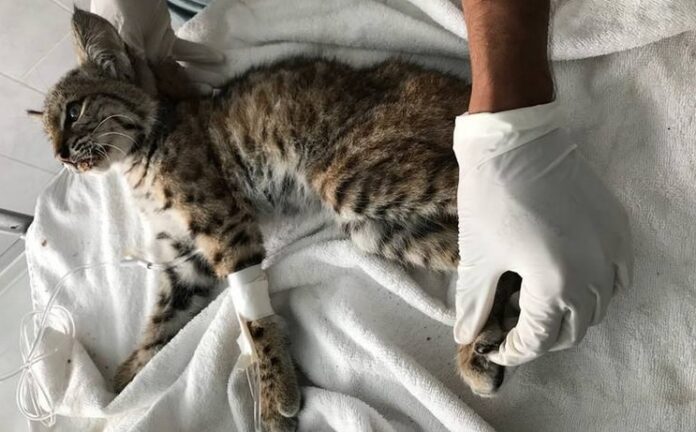 The specimen is a female without movement in her hind legs, it was taken it to the Mazatlan Aquarium.

Mazatlan, Sinaloa (Feb. 21, 2021). – On the morning of this Sunday, February 21st, a young couple rescued a badly injured lynx that was crawling in the middle of the road and transferred it to the Mazatlán Aquarium for medical attention.

The young people reported that the animal was in the middle of the road where they were circulating and when they got out of their car to help it, they realized that it was an injured lynx that could not walk, so they decided to take it to the Aquarium facilities to receive attention.

The veterinarian at the Hospital de Fauna Silvestre said it is a young female, whose hind legs are without movement. An X-ray was determined to detect any internal damage that she might have.

After reviewing her, she was administered an analgesic, serum to hydrate her, an external dewormer and a special food for critically ill animals.

The lynx will remain under the observation and care of the Mazatlán Aquarium staff. The time for its recovery will depend on the results of the studies.

Well-deserved recognition after 83 years of working as a craftswoman