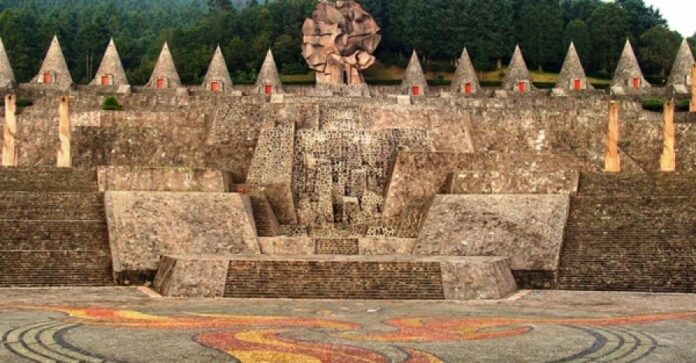 Near Mexico City, north of Toluca, in the State of Mexico, there is a small town in which the Otomí culture was established three thousand years ago and therefore is considered the homeland of the Otomí people.

Yes, it is Temoaya, a place where you can try culinary delights made with corn, charales, squash, quelites, and chorizo. You can also visit its square and find arts and crafts, especially textiles. We tell you where it is and what to do in Temoaya, Pueblo Mágico.

A little further north, in the middle of the forest, is the Otomí Ceremonial Center that, although they are not pre-Hispanic vestiges, was built with a design of clearly Otomí references that show us the greatness of this culture, in the eighties of the Last century.

It works not only for the religious celebrations of the Otomí people in which the four natural elements are venerated: water, air, fire and earth, it also serves to promote the development of the region through tourism, since it is You can spend a day with your family or friends, exploring the architecture of the place or having a picnic in its green areas.

Upon arrival, the first thing that can be appreciated is one of the two squares it has: the Plaza del Coloso, which welcomes visitors with a mural with an image of a nahual, designed by Luis Aragón. Then we find the Plaza del Sagitario, which in the center has a painting of three calls that symbolize the body, spirit and will of the Otomí people.

Around this square, we can see several stairways that have intertwined serpents, 52 in total, which symbolize the weeks that a year has or the cycles of the Aztec calendar. Higher up you can see the conical structures that represent the snail, related to water and music; the months of the year and the Otomi generations that have passed, in the center is the monument to the Sun, Tata Jiade, on the Lustral fountain.

On the west side of the patio there is a space equipped with seven columns that represent the seven caverns in which the seven Nahuatlaca tribes arose, with the days of the week and the musical notes. All areas of the place are connected by stairways, from which you can see most of the corners with Otomi symbolic elements.

Temoaya, is an excellent option for a holiday, where you can enjoy a museum, a handicraft market, cabins, a lake, and camping spaces.

How to get there

The typical dishes of Durango gastronomy

The typical dishes of Durango gastronomy