The need led Ignacio Gómez to learn the trade of bolero “shoe shiner” at 7 years of age, and it is the same that keeps him standing during quarantine

Mazatlán, Sinaloa.- In his 64 years of life, Don Ignacio Gómez has been a bartender, a cook, a mason, but it has been the chair and his bolero drawer, a job he learned from the age of seven, what has given him the ability to support his family.

In times of pandemic, Don Nacho stands firm on the same corner of the Plazuela República, contemplating the solitude of the street in the days when the “stay at home” emptied public spaces.

The man, originally from a community in El Roble, was brought by his grandmother to Mazatlán at the age of four, when his parents separated. At that time he began to clean the belt huaraches that he had, he painted them to make them look better. That was how he began to learn the trade. 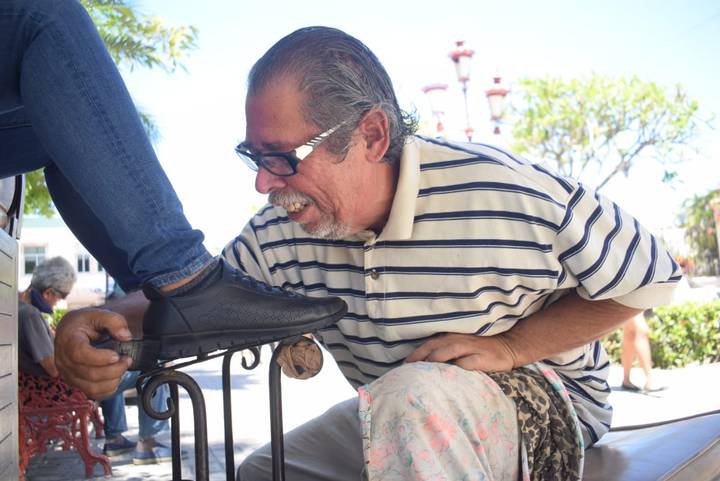 His life has not been easy, he studied until the fifth year of elementary school and then he went to work as a bolero in the canteens, to help his grandmother who was washing someone else’s.

Years later, he arrived at the Plazuela República, where he has carried out the activity constantly, although there have been times when he focuses on other trades, depending on how his economic situation is.

Life has taught me many things, sometimes I have slept here, I have had a difficult life. I do not like problems, lawsuits, I am calm, I try to avoid problems

For Ignacio, his day begins at 9:00 in the morning, sitting, patiently waiting for the arrival of his first client, his comfortable chair surrounds him, under it, brushes, pumpkin soap, paints and cloths, which are his work tools.

He not only polishes and beautifies shoes, he also listens and advises his clients, is friendly, offers good service and treatment.

When the clients arrive they talk to me about their things, most of them are men, they start to tell me that they were angry with their mistress, for the sons and daughters, who ignore me, I talk to them and they vent and feel at ease, and with that they are happy

Boleros are sociable people, “dumb” witnesses to what happens in the streets, people ‘s confidants and connoisseurs of life.

Between trapazo and trapazo, “El Tribilín”, as they know it in the Plazuela República, ensures that bowling shoes is difficult, because in addition to leaving them clean and shiny, many times it has to massage the feet of clients who ask for it, in addition to prepare the inks and fats, put caps, sew and mend any type of footwear.

He acknowledges that, like his 21 colleagues, he lives a complicated contingency when he does not have a job, since he barely performs three 25-ball bowls a day, when it is going well, since there are days when he returns home, already past 6:00 in the afternoon, without a weight in his pocket. Three months ago, remember, before the Covid-19 arrived, it had up to 20 customers per day.

The competition there in the square is stiff, especially when there are not many customers.

That is why he regrets that there is no support for the boleros from the government, they hardly gave them a pantry that will help him a few days to eat, because he lives alone, but he also has to pay for water, electricity and rent.

I do not like to go asking anyone for anything, the City Council does not give you anything, you need a lot of paperwork to give you a pantry or a fair, they ask you for many requirements. Right now the situation is very difficult, you have to pay for the water, the electricity and sometimes I don’t even get to eat

Until three months ago, he combined the bullying with his work in a canteen in the city center, but he was fired and without a weight of compensation.

I have my hand drawer and when I was in the canteen I took advantage of my rest day to go bowling right there, and with that it helped me, but it is no longer possible, now only what comes out here in the square is what I help myself with

The older adult is not afraid of catching the coronavirus, and does not even use a face mask, since he says that he does not believe much that the disease exists, although every day he hears that the deaths are increasing.

Retirement is not yet an option for the shoe cleaner, the motivation to work in a flexible and highly social activity excites him, to continue until he can physically do it.

As long as they do not remove it from the square, it will be there, hoping to polish the shoes of people who, like him, the Covid-19 does not keep “locked” in their homes.