The Moral Primer that President Andrés Manuel López Obradordisseminated raises concerns among activists of the LGBT + community because they believe that it reinforces values close to religious groups opposed to sexual liberties.

Andrés Manuel López Obrador began on Sunday, January 13 the distribution of the Moral Primer, which seeks to promote a series of principles and is based on a text by the Mexican writer, thinker, and diplomat Alfonso Reyes.

The text mentions on 15 occasions the word soul and 17 times the word spirit and on no occasion the word “woman” , which has generated various criticisms in social networks about a supposed religious and excluding character of the text.

Alex Órue, director of the organization It Gets Better Mexico, maintains that the text reflects the Christian ideology of the president, “alien to his position and duty to ensure the secular state.”

The document, written in 1952 and edited by the Secretariat of Public Education (SEP) in the 90s, “is part of the materials selected for the Emerging Master Update Programs and Reformulation of Educational Content and Materials”.

“That the SEP distributes a material for educational purposes that speaks of ‘soul’, ‘spirit’ and the ‘condition of men’, without any mention of women, I find it ridiculous,” said Enrique Torre Molina, activist and consultant LGBT + issues.

The episode adds to the fact that on Sunday, January 13, journalist Beatriz Gutiérrez, wife of the president, published an opinion article in the weekly Desde la fe, published by the Archdiocese of Mexico, on sacred art.

The activist Órue pointed out that this fact, together with the Moral Booklet, turn on the red flags since they are “a threat to the secular State”.

Orué stresses that behind Lopez Obrador’s various acts there are “symbols of religious overtones” – such as the fact that the party he founded is called Morena – “that are not in favor of civic values but to reinforce moralistic aspects that can be a threat to the sexual, reproductive freedoms of women and the LGBT community. “

Last Sunday, the president asked older adults to read this document voluntarily and share it with their families in order to strengthen the values and lead to the construction of a better society.

López Obrador has argued on several occasions that the issue of equal marriages and abortion will be subject to consultation, which has generated criticism, even of followers who sympathize with him.

In the opinion of Torre Molina points to the issue of the family, which has a section in the text of the Mexican writer: “It scares me that those in charge of education in our country want us to talk about the family as something ‘natural’. That combination of words in the same document sounds like the messages promoted by anti-rights groups, from the so-called “Front for the Family” to the Social Encounter Party, which allied with Morena in the 2018 electoral campaign.”.

“I do not understand the need for a document of this type. It seems, like many of the things that this government has done in its first days, an occurrence, “says Torre Molina .

What is the Moral Booklet distributed by the government of Mexico?

A year ago, when Andrés Manuel López Obrador (AMLO) undertook his third campaign for the presidency of Mexico, he declared himself “sponsor” of a “new current of thought”.

By accepting the presidential candidacy of the Social Encounter Party (PES), a center-right formation whose motto is “to transform Mexico from family and values”, the politician expressed his intention to seek the creation of a “moral constitution” for his country.

He told members of the PES that it would serve “to promote a moral paradigm of love for family, neighbor, nature, and homeland.”

And this weekend, a month and a half after assuming the presidency, AMLO materialized that idea through a decalogue called “Moral Primer” that it expects to distribute, initially, among 8.5 million beneficiaries of social programs.

It is a document whose objective is to “moralize the public life of Mexico,” as he said at his meeting with senior citizens who will receive money from the government.

“Precisely for that reason today this Moral Booklet is going to be distributed because we have to strengthen the cultural, moral and spiritual values, not only to achieve material well-being, but also the well-being of the soul,” he added.

The publication of 30 pages is an adaptation of an essay of the same title, “Moral Booklet”, written by the Mexican philosopher Alfonso Reyes (1889-1959) 75 years ago.

The adjustment of the government of AMLO is what made the literary critic José Luis Martínez -one of the most outstanding disciples of Reyes- and is distributed with illustrations of figures of the history of Mexico and some national symbols.

AMLO says in the introduction that this moral guide is a tool for Mexicans in the face of the “decadence” that the country is experiencing as a result of corruption, lack of opportunities and loss of values.

For the analyst Carlos Sepúlveda, despite the good intention, it is a document that “nobody in Mexico will read”.

“It is very good to try to get people to act in all areas with an attachment to ethics, to citizenship,” says Sepúlveda to BBC Mundo.

“The document does not really have any practical meaning, it has an informative sense that seeks to instruct many people in matters of civility and culture, but I think it will not influence anything,” he says.

Other commentators describe the document as an attempt at religious indoctrination and even a threat to the secular state.

Alfonso Reyes wrote the “Moral Primer” in 1944 at the request of the then Secretary of Public Education (SEP), Jaime Torres Bodet, when the country went through a literacy campaign.

Reyes is considered one of the most important Mexican thinkers of the twentieth century, linked to the German philosopher Friedrich Nietzsche (1844-1900) and cataloged by Jorge Luis Borges as “the best prose writer of the Spanish language of any era.”

He prepared the essay with 12 “lessons” in which he addresses the values of human beings and society, as well as their relationship with nature.

“Man must educate himself for the good, this education and the doctrines that he inspires constitute morality or ethics,” he says at the beginning of the first lesson.

Martinez’s adaptation takes up the 12 lessons, although in the AMLO government publication they are simplified into 12 topics and two final summaries.

Between the lessons is “The moral and the good”, “Body and soul”, “Respect for our person”, “The family”, “The homeland” and “Nature”.

Alfonso Reyes is the son of General Bernardo Reyes who, paradoxically, participated in the armed assaults that led to the assassination of President Francisco I. Madero.

The latter appears as one of the heroes of Mexico illustrated in the “Moral Primer” of AMLO.

Several are the points that have generated controversy among those who criticize the presentation of the “Moral Primer” as a guide to the personal and social life of the country.

“Respect for our body teaches us to be clean and moderate in natural appetites.”

That phrase, written this way in the summary of the 2019 edition of Lesson 5 “Respect for Our Person”, has been one of the most questioned by those who believe that it raises vague concepts, some of which are exceeded at present.

“The practice of good, the object of morality, assumes the observance of a series of respects that we will study in the following lessons, which are equivalent to the ‘ commandments ‘ of religion. “

He adds: “They are unappealable, you can not ignore them without being reproached by the voice of conscience, the moral instinct we carry in our very being.”

Such phrases have led some people to consider the document as “dogmatic“, with statements that do not give room for debate or contradiction.

Others consider that it tries to generate feelings of personal guilt , similar to those of some religious precepts.

“Each of us, even if alone and without witnesses, should feel guarded by moral respect and should feel ashamed to violate this respect. “

However, there are also those who consider it a mistake to read the “Moral Book” of Alfonso Reyes as a document with religious overtones and, on the contrary, consider it “secular and liberal”. 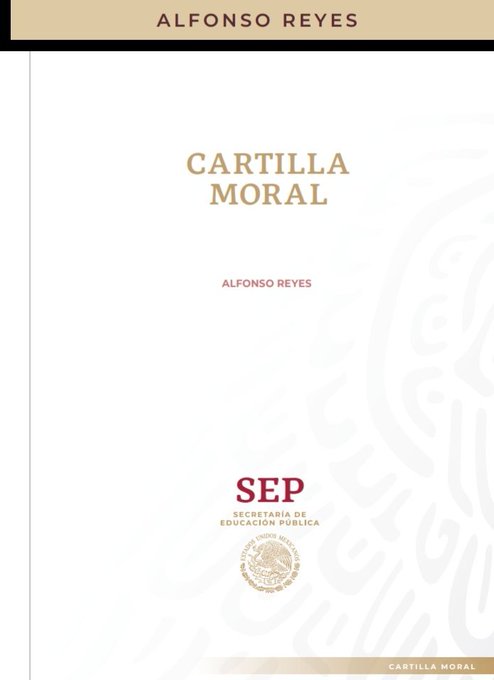 Is it against the secular state?

The establishment of the separate State of the Church was consolidated under the presidency of Benito Juárez, one of the figures on the cover of the “Moral Primer” of the AMLO government.

So some critics of the document that consider it as “religious” see a contradiction in its publication by the Secretariat of Public Education.

But AMLO for a year ago anticipated these criticisms and pointed: “Those who think that this issue does not correspond to politics forget that the ultimate goal of politics is to achieve love and do good because that is the real happiness“.

“It does not contradict my conception of a secular state,” he added.

The analyst Carlos Sepúlveda believes that in Mexico, where more than 80% of the population declares themselves to be Catholic, there is often a misconception of secularism.

“That the State is secular in nothing contradicts the religious faith of the Mexican people, On the contrary, secularism supports a sense of practicality: it does not ignore religion or attack it, ” he explains.

“The secularism of the State and the religion of the people are two different things, and in that sense, I believe that the Primer neither subscribes to religion nor contradicts the constitutional postulate of a secular State .”