TIJUANA, Mexico—Facing diminishing prospects of entering the U.S., Central American migrants in this Mexican border city are turning to the local job market as authorities pitch more than 7,000 vacancies and a fresh start.

The Mexican government set up a job fair that works as a one-stop shop to file for asylum in Mexico, obtain a social security number and sign job contracts in Tijuana, a manufacturing hub with one of Mexico’s lowest unemployment rates. 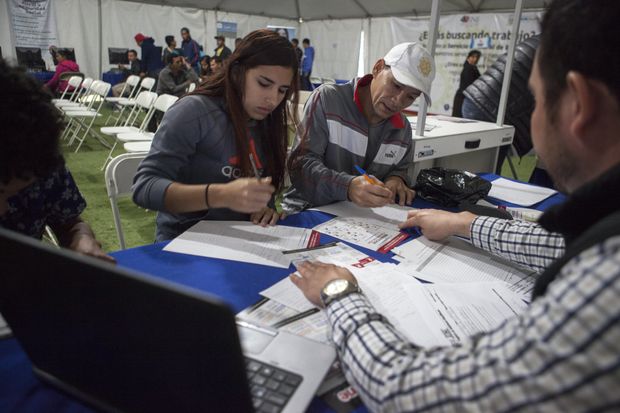 Alejandro Gurrola, right, a local human-resources recruiter for the company SuKaren, speaks with potential employees at the job fair.
Close to 3,500 migrants who arrived in Tijuana in the past month have attended the job fair, Mexico’s National Employment Service estimates. The fair began around Nov. 20, but attendance increased late in the month after hundreds of migrants made a rush for the border fence in an attempt to cross, but were turned back by U.S. Customs and Border Protection officers who fired tear gas.

“For the duration of their stay, we want it to be legal and contribute to economic development,” said Luis Rodolfo Enríquez, the regional head of the employment service, which organized the job fair. 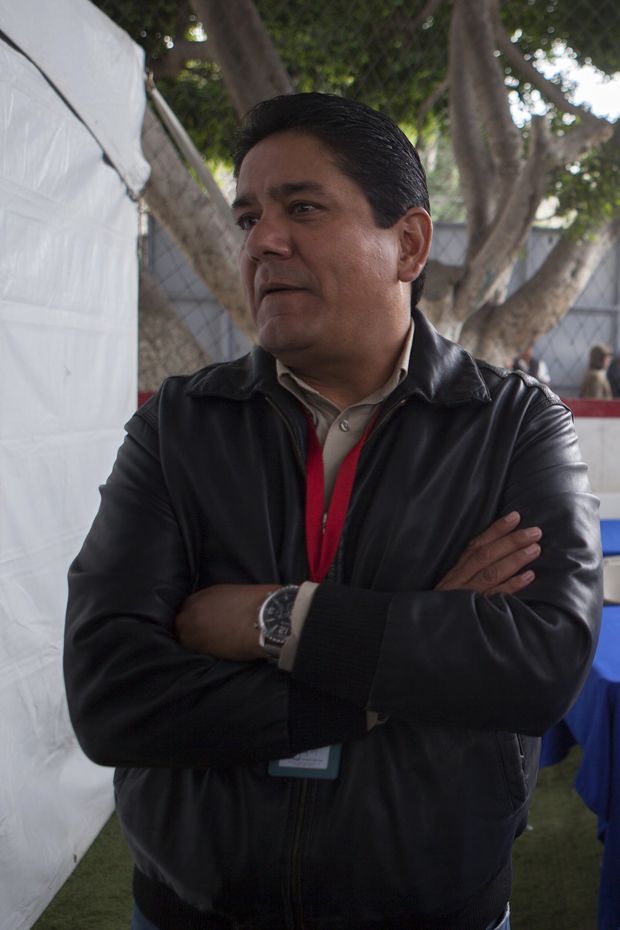 Luis Rodolfo Enriquez, director of the National Employment Service for the state of Baja California, at the job fair.

Mr. Enríquez estimates that some 2,000 of the 5,000 Central Americans encamped in Tijuana could have jobs by the end of December when the fair is finished.

The city of 1.6 million inhabitants is a hub for labor-intensive plants that assemble everything from flat-screen televisions to medical equipment that is exported tariff-free to the U.S.

The low salaries paid by these firms in Mexico were among the main reasons President Trump demanded a renegotiation of the North American Free Trade Agreement with Mexico and Canada. The new trade deal signed by the three countries last month aims to improve wages and labor conditions in Mexico and discourage plants from relocating from the U.S. to Mexico.

The border city of Tijuana has one of Mexico’s lowest jobless rates.

The city has an unemployment rate of just 2.8%, below the average 4.1% jobless rate in Mexico’s main 33 cities.

“There are opportunities here, and if migrants want to take advantage of them, they are within their reach,” said Ernesto Bravo, head of the western division of Tecma, a U.S. firm that helps foreign companies set up operations in Mexico.

Wages at most maquiladora jobs are double or triple the country’s minimum wage, which is currently less than $5 a day.

Tijuana is among Mexico’s most violent cities, but for Marcos Chacón, it is still safer and more prosperous than his Honduran hometown of San Pedro Sula. A few weeks ago, the 40-year-old construction worker decided to look for work in Tijuana rather than join a waiting list with thousands of migrants seeking to petition for asylum in the U.S.

The $65 a week a construction firm has offered him will be enough to move out of the migrant shelter and rent a home with a couple of fellow Honduran migrants, he said.

“You can make a living here, but the problem is that I won’t be able to save enough to send money to my wife and children back home,” Mr. Chacón said as he lined up to get his social security number. 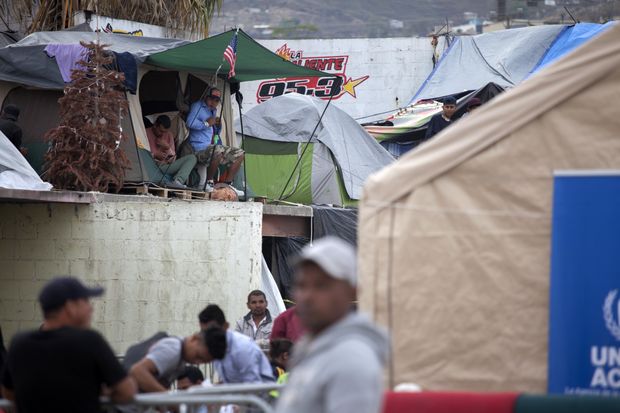 The government-run shelter for migrants, El Barretal, in Tijuana.

The fair is hosted under a big white tent on the grounds of a Salesian Catholic mission, featuring stands of Mexican government agencies and employers, including supermarket chain Organización Soriana SAB, Mexican meatpacker SuKarne, and ManPower Group Inc.

“We want you in the team,” read a flyer distributed by SuKarne, which offers wages of about $65 a week after taxes; transport to and from the firm’s plant; health coverage with the Mexican Social Security Institute, a federal health-care provider; and a $15 signing bonus. Workers who stay in the job are promised a $75 bonus for their first three and six months of work.

“We need to fill 33 positions as soon as possible,” said Alejandro Gurrola, the human resources director of the firm’s plant in Tijuana, where some 200 workers process pork legs. 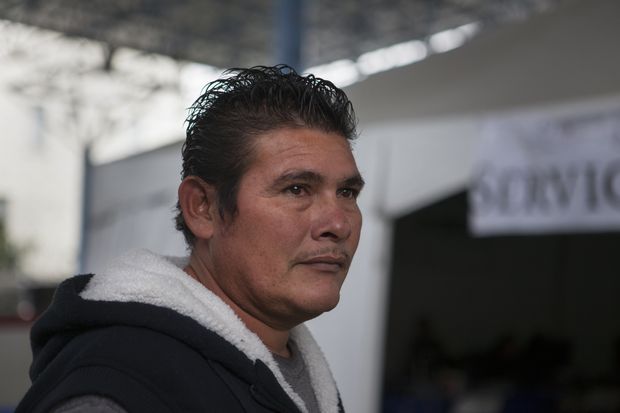 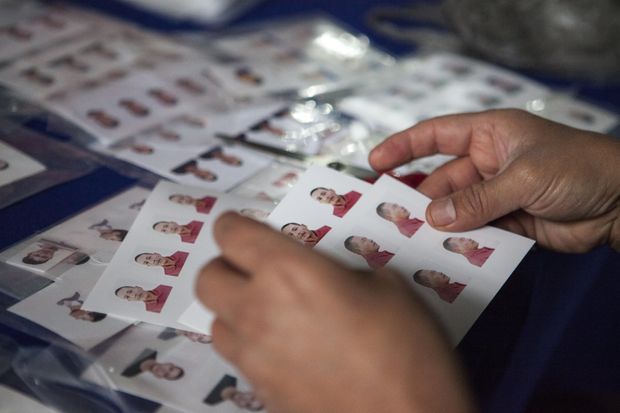 A photographer assists migrants with their photo IDs for obtaining their Mexican work visas and registration for health services at a stand at the job fair.

The schooling of most caravan migrants, who are mostly young Honduran men, is about six years, below Tijuana’s average of 9.7 years, according to a recent survey conducted by the Colegio de la Frontera Norte.

Only two migrants who attended the fair had college degrees, authorities said. Most are rural or construction workers, and only 9% have operated industrial equipment, the survey found.

“As long as they can read and write, that is enough for us,” said Mr. Gurrola as he showed job candidates a video of the Tijuana plant on his laptop. “There’s turnover and a lot of competition for workers in Tijuana’s labor market.” 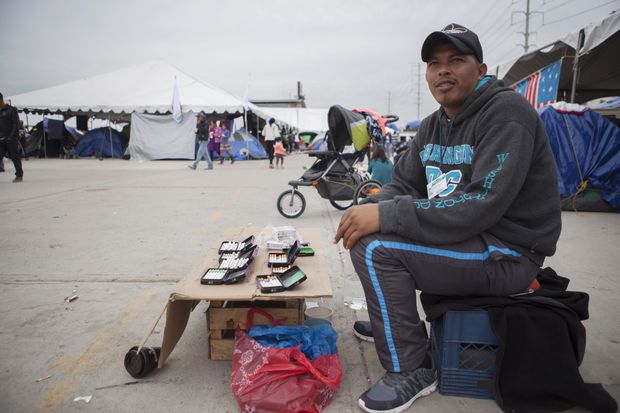 Julio César Arteaga said a bullet wound he sustained in a confrontation with a gang member in Honduras could hinder him from finding a job in the booming manufacturing sector, but he filed for asylum and work-authorization last week.

“As long as I have a job, I don’t care where I am,” he said as he sold loose cigarettes for 25 cents apiece near the shelter’s main entrance.