The figure is for each migrant; The Caravan Migrante handed a petition to US authorities, warning that if they do not receive the money they will enter the USA in a mass.

50 thousand dollars for each Central American to return to his country, was the amount demanded by the members of the Migrant Caravan in a petition form delivered before the authorities of the United States, in which they affirm that otherwise, they will enter in by force to North American territory.

Today we have a letter to present to the consul of the embassy in Tijuana, we have proposals, demands, “said Alfonso Guerrero on behalf of the migrants.

The US diplomatic headquarters in Tijuana was guarded by anti-riot elements of the Federal Police , who allowed on behalf of the approximately 200 Central Americans who formed the contingent, Alfonso Guerrero Ulloa and Luis Fernando Hernández, to deliver the petition to the American consulate. in writing, from which they expect a response from the US government within 72 hours.

We want to pass us, if not, we will jump all the caravan. 72 hours, goes there in the letter and if there is no answer we will jump, it is a surprise that we will give, when it is over we will go and nobody will know when the shelter is empty, “said Selvin, a member of the Migrant Caravan.

Hours before, the Central Americans held a demonstration in front of the headquarters of the offices of the National Institute of Migration (INM) from where they left for the consulate.

Moments of tension were experienced where members of the migrant caravan are in the vicinity of the US consulate on this border, which is surrounded by grenadiers who formed a seat belt around the diplomatic headquarters.

The Central Americans held a demonstration in front of the headquarters of the offices of the National Institute of Migration (INM) from where they left for the consulate.

There, officers of the State Preventive Police and Municipal Police, were stationed with patrols, shields and anti-riot equipment in order to repel any attempt to approach the offices of visa management and other procedures . 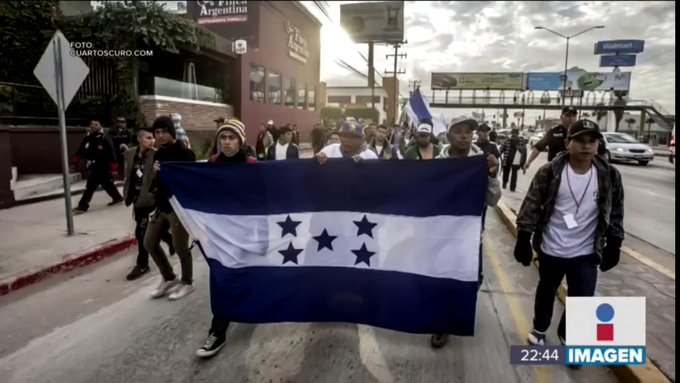 Former DEA agent: Death or arrest of “El Mayo” Zambada will cause a bloodbath in Mexico

Green light! As soon as possible, a booster vaccine for COVID will be applied in Mexico