The Mexican indigenous people point out that they should be treated like the Central Americans who cross the country, to whom the government of Mexico has attended to their needs but abandon their own people.

Around 400 indigenous people from the municipalities of Chenalhó, Ocosingo, and Zinancantán left their communities to flee the violence; They want to be taken care of like the caravan of migrants.

Threatened by armed groups, indigenous people from the municipalities of Chenalhó, Ocosingo, and Zinancantán, have moved from their communities to nearby municipalities in the highlands of Chiapas.

A post-electoral political conflict is what displaced the indigenous because not having supported the Green Party has brought them threats from opposing party groups; Better to leave than to lose your life is your motivation. 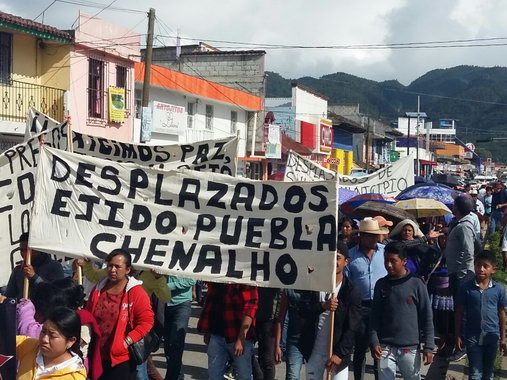 “Our displacement was for a post-electoral reason in which we decided not to vote for the Green Party, the paramilitaries got angry and they had to run us off, they shot us, threw stones, sticks and everything they had to get us out of the community, we arrived at Chenalhó, and we had to move as we had, “says Catarina Etzin, displaced from Chenalhó .

There are about 400 people who have moved from their communities; even some since 2015 left their communities and left behind their homes, land and domestic animals they had; they were left with nothing.

Javier Hernández, an indigenous displaced person, tells MILENIO that the situation has been so complicated that they have already been wounded and even killed by these political conflicts.

“We were already met with bullets, with machetes, and our companion was wounded; wounded by bullets, our companion, unfortunately, lost his life with three bullet wounds, for that reason we were displaced.

We’ve been two years and six months already; We have a camp in San Cristóbal de las Casas that the government gave us, a location, “says Javier.

The indigenous make up the other caravan, the barefoot one, which has traveled 50 kilometers from San Cristóbal de las Casas to Tuxtla Gutiérrez to be served by the state government, which has not resolved the conflict.

In this journey, they have been assisted by Red Cross personnel, sometimes by Civil Protection and the Federal Police.

The Red Cross reported that they have distributed 72 tents, 150 blankets, 1,200 liters of water for human consumption and various medicines for pain, they have also made some cures of blisters caused by the walk, some infections in the throat that doctors value and treat.

However, it is not enough, the Mexican indigenous people point out that they should be treated like the Central Americans who cross the country, to whom the government of Chiapas did attend.

“We have decided to make this caravan because the government has supported the caravan migrants and we are Mexicans, there should be more support, it is their obligation to solve our problems, our situation,” says Catarina Etzin, an indigenous displaced person.

“If it was seen that migrants from the Guatemalan and Honduran caravan were treated in our state and in our country, but just as displaced we have a greater right because we are Chiapas, we are Mexicans, according to our rights that we are suffering, ” says Juan Hernández, displaced from the ejido Puebla de Chenalhó.

The displaced affirm that they will seek to reach the Chiapas government palace in order to request a safe return to their communities, to disarm the paramilitaries of the area, to return their lands, which do not have the constant threat of being killed.

They say that if their situation is not resolved, they will look for President-elect Andrés Manuel López Obrador because they trust him to solve their situation. Meanwhile, they will continue to walk so that the authorities pay attention to them so that the government attends to the other caravan fleeing the violence in their country.

Expats in Mexico and their White Savior Complex