We tell you how you can process the permit to consume legal marijuana in Mexico and what implies the approval of the fifth protection of the Supreme Court of Justice.

Surely you know that marijuana can be consumed and cultivated for recreational use … as long as the request is made before the federal authorities.

Note: this does not mean having an open letter to distribute or trade, which is still a crime, but it is a formal approach to regulate activities related to the personal use of cannabis in Mexico, including sowing, cultivating, harvesting, preparing, possess and transport.

Here we explain what are the changes and how to process the permit for the consumption of legal marijuana in Mexico.

What is that about jurisprudence?

On October 31, the Supreme Court of Justice of the Nation (SCJN) “generated jurisprudence” by accepting the fifth amparo for the recreational use of marijuana and considered unconstitutional the articles of the General Health Law (235, 237, 245, 247 and 248) that prohibit cultivation and consumption.

When adding five sentences in the same sense, the Supreme Court set a precedent, since the issue ceased to be of particular interest and became a criterion with which judges must act at the national level.

“This does not mean that the consumption is already legal. If an unauthorized person carries a weight for personal use, he or she may be detained and even if in this case there is no penalty, the detainee will go through the judicial process until a control judge releases him or her. Up to this point, there are no changes, “explained Víctor Manuel Alonso, a lawyer specialized in amparos.

The argument of the ministers Arturo Zaldívar and Norma Piña is that the current legislation and the rejection of the administrative permits that must be requested before the Federal Commission for the Protection against Sanitary Risks (Cofepris) violate the human rights to dignity, pluralism, personality, own image, personal and corporal freedom.

“Until now, those who want to access the benefit obtained must carry out the jurisdictional process that the five interested parties did to whom the amparo was accepted. It is still not legal, but practically what the Court did was to say ‘to see the district judge, when someone asks for an injunction you will give it to them even if you do not want to,’ “explained the also professor at La Salle University.

However, the defendants claim that the permits they obtained are not clear since they can not publish the sentence to defend themselves if they arrive to be arrested, as well as prohibiting the consumption of cannabis in “public places where third parties are found that have not given their authorization” .

These are the steps you must follow to obtain permission for the consumption of legal marijuana in Mexico:

In the document, you must add the name of the person requesting it, an address to receive notifications and mention Cofepris as the responsible authority.

This point is important to indicate that the violated constitutional right is the free development of personality, established in Article 1 of the Constitution, and make a narration of the facts under protest to tell the truth.

“The amparo is requested in the Office of the Parties of the District Courts with an original and two copies and you will have to write down your file number. The status of your protection can be found online through the Integrated File Tracking System (SISE), “said Víctor Manuel Alonso.

According to Mexico United against Delinquency (MUCD), the goal is to “ensure respect for the Human Rights of all people” without going through the process of processing the permit for legal marijuana in Mexico or presenting an amparo, but, for that, some steps are still missing. 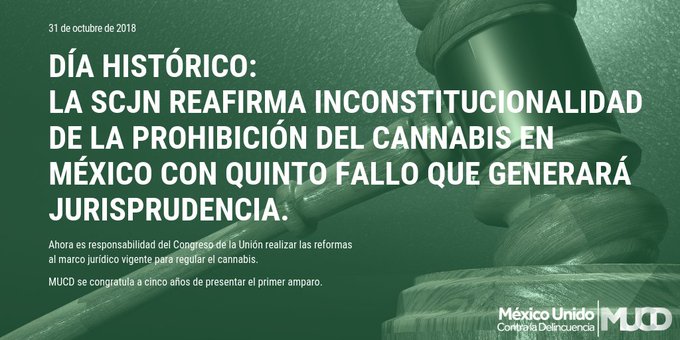 After the Supreme Court determined the unconstitutionality of some articles of the General Health Law, a call will be made to the Congress of the Union to discuss the issue and make the changes.

If in the following 90 days the Congress does not act, the 11 ministers have the faculty to go to the plenary and vote the “expulsion” of the Legal System of that part of the General Health Law that imposes a sanction to the recreational use. If 8 of the 11 votes are achieved, it becomes effective.

Before that happens, the Congress of the Union has the opportunity to discuss, modify laws, decriminalize and regulate the recreational use of marijuana.

And the covered ones where will they get marijuana?

Buy marijuana in the country is still illegal -without and amparo- that is, even if you get the process you can not buy it in Mexico because the protection only protects the harvest, planting, transportation, possession, and personal consumption.

According to information from El País , several of the people protected are now in the process of processing an import permit, such as Aram Barra, who obtained one of the five amparos and will try to obtain the permit granted by Cofepris to import seeds. legally.

In Mexico, only one import license has been granted, but only for medicines that have one of the components of cannabis: CBD, used for the treatment of epilepsy.

What does Cofepris say?

On Monday, November 5, the owner of the Cofepris, Julio Sánchez and Tepoz, explained that the Commission can not grant permits for the consumption of legal marijuana in Mexico unless a judge orders it.

He added that the dependency to his position has issued 10 permits for the recreational use of marijuana to the same number of people derived from the amparos granted by the Supreme Court of Justice of the Nation (SCJN).

According to the Anahuac University, the top 10 careers and salaries expected in Mexico