Although the summer holidays ended, the surveillance operation on beaches is maintained with the same number of lifeguard elements and in a 12-hour schedule

51 water rescues and three deaths is the balance of the beach surveillance operation implemented during summer vacations by the water rescue squadron of the Public Security Secretariat of Mazatlan. 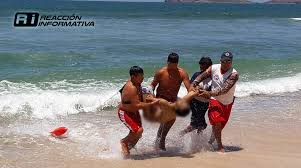 The commander of the rescue body, Martín Zúñiga, said that the balance is positive, despite the fact that there were adverse situations due to the presence of the bottom sea on several occasions during the holiday period.

He pointed out that there is still a lack of awareness among swimmers not to put themselves at risk, because they do not follow the recommendations of the lifeguards or the signs installed on the beaches, as well as drinking intoxicating drinks before entering the sea, a situation that caused a significant number of arrests during the summer in Mazatlan.

Zúñiga Estrada, pointed out that at the moment the sea conditions are calm, and although the summer ended the surveillance on beaches does not diminish, the operation continues with the same number of elements in a schedule of 8 to 8 in the entire coastal strip of Mazatlan

The “Mayor” has failed to improve public services in Mazatlán

Police will monitor cemeteries in Mazatlan for Day of the Dead