Lilia Carolina Ramos Chaidez has been a police officer for the municipal Public Security Secretariat of Mazatlán for 15 years and after going through all the ranks, for four months she has been part of the history of the corporation by becoming the first female operational deputy director in the port.

She is 37 years old and although she knew from a young age that she wanted to be a police officer, it was not until she was 22 that she joined the ranks of the preventive corporation. At that time it was not very common for a woman to carry out the work that she now does with great pride, but she has always known how to face any challenge that was put in front of her.

She is one of the nearly 300 women who currently make up the corporation in the prevention, traffic, investigation and custody areas, in different surveillance operations throughout the city.

It was on October 16, 2008, when he entered the ranks of the Preventive Police, where she started as a security guard in the Public Security building that was then located in the Benito Juárez neighborhood. Two years later she was sent as a watchman for the reaction groups. Hence, she was appointed group leader of sector 3 in the López Mateos neighborhood.

” I lasted a few months there because the tactical group was formed where they sent me to Culiacán for training for a month, I lasted four years there, from there I was commander of sector 6 which is in the Juárez neighborhood, which includes Villa Galaxia and November 20 where I stayed for a year .”

The police are part of everyday life, and their value is invaluable, since each one of them has a function, from helping citizens for anything, to avoiding misdemeanors and crimes. It is always normal to run into male police officers, whom you meet on the streets, but nowadays it is common to find women who carry out this work.

“I love being a police officer, I like serving citizens, supporting them, our job is proximity, getting closer to citizens, finding a solution to their problems, safeguarding their integrity, which is my job, and that has worked very well for me. “

As in all security work, the activity carries risks and the saddest thing she has seen are motorcycle accidents, where women, youth and children lose their lives.

“It’s something surprising, seeing that kind of situation will always surprise you or make it difficult, because you have children and it’s very painful for you .”

Violent events such as shootings have not touched her. When she joined the corporation, these types of events were very frequent, but she was not so involved in the operation and right now Mazatlán is calm in that sense. 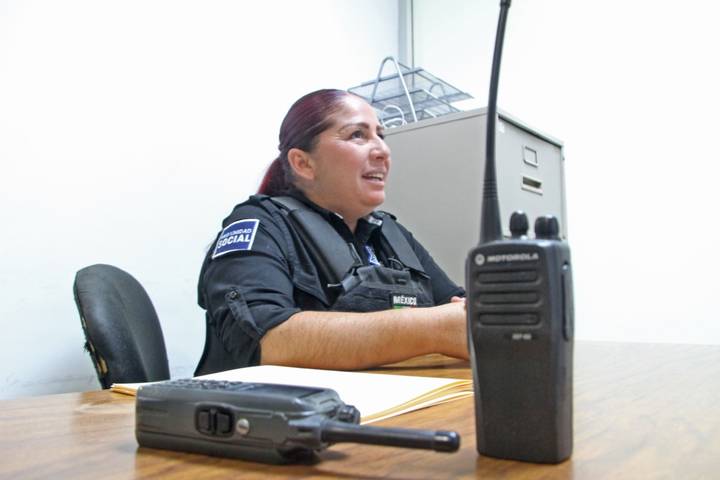 Caro likes to be an example for her children and for her fellow women. Photo: Fausto McConegly | The Sun of Mazatlan

” Being a policeman, a man or a woman, is complicated, because you have to understand that you have an entry time, but not an exit tim , you even have to take into account that we may not return home,” she says.

For her, the day begins at 7 in the morning when she leaves her house, the first thing she does is supervise, support schools , bus stops, to give citizens security, so that they see the presence of public servants.

” This work is not easy, since you practically have to leave your family alone, especially the children, who are the ones who depend on you as a mother. But it is an activity that makes me very proud and I will continue doing it to show my three teenage children, two men and one woman, that as women we can be strong and that nothing can stop us .”

Being able to combine being a police officer, a mother and a wife is the most beautiful thing for her, because at the end of the day it leaves her with great satisfaction. Arriving at her house, sometimes stressed, and feeling the support of her husband, of her children, enjoying with them the little free time she has, fills her with energy.

” Normally I get home at 11 at night, but I have calls, messages from one, two, four in the morning, I am in about 40 WhatsApp groups from various neighborhoods and subdivisions and there are those who ask for support for various problems And you have to be very vigilant.”

I dreamed of being a police officer

Since she was five years old she dreamed of being a policeman, she played cops and robbers with her brother and her friends, she dressed in jean, a belt, a T- shirt, a black cap and he put a toy revolver on his waist

” I was always the policeman, my brother used to get angry because I did not want to be the thief. I always saw myself in that place, that I wanted to be a policeman, imagine now how I feel, proud to be the first female deputy director “.

Carrying out this job allows her to grow as a human being and as a professional and although her Social Work career is cut short, she would like to study for a Law degree, to be more prepared when it comes to doing her job.

She reiterated that it is a great pride to be part of the police, especially for the fact of being a woman and where fortunately her colleagues, her bosses and the mayor have given her all their support.

With her two radios and a 9-millimeter Glock, she explains that an operational deputy director organizes operations at events, proximity to citizens, supervises coordinators, commanders, group leaders, but more than anything, she must be attentive to all personnel.

” They received me well, because I had already had positions as a facilitator, group leader, coordinator, so they were already used to me being in charge, times have already changed in this regard and now women can carry out this type of activity without any problem. “. 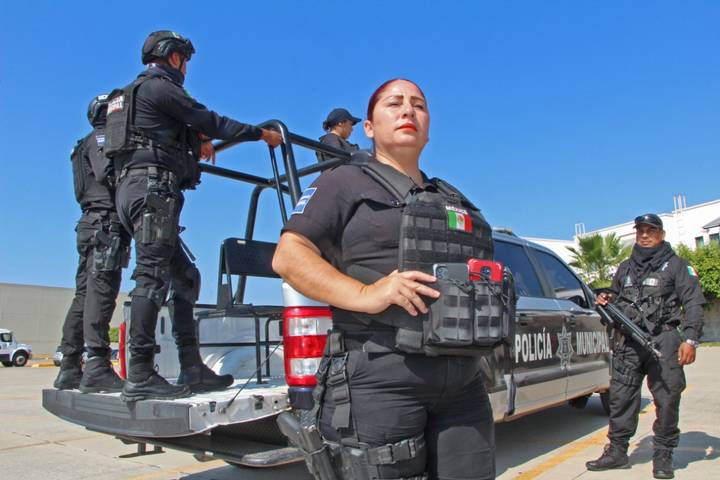 The police seek to dignify this profession that is so criticized in society. Photo: Fausto McConegly | The Sun of Mazatlan

Commander Caro points out that the perception of the police has changed, now they have a better image and therefore there is more trust from citizens towards the agents.

And it is that the new generations of elements have had a lot to d , now they are asked to comply with better behavior and vision for public safety.

Caro carries out her work with great responsibility. She likes to be an example for her children and for her female companions, since together they dignify this profession that is so criticized in society.

Mazatlan currently has around 800 active policemen, of which 35 percent are women, but there is a deficit of around 300, as confirmed by Mayor Édgar González Zataráin.

The State Delegate of the Confederation of Bar Associations of Mexico, José Serna Valdés, mentioned that more interest is required in terms of resources on the part of the federation, the state and the municipality, to strengthen one of the most important edges of a city ​​and that locals and tourists feel safe in the city.

” There is a need for a greater number of police officers in the Public Security Secretariat, that is a challenge, there is a lack of resources from the three levels of government, the security secretariat must be strengthened, we have a significant police deficit, ” she said.

” It is a point that we have to reinforce and strategies must be sought by the Mazatlan City Council to improve this situation,” she added.

Lilia Carolina Ramos Chaidez has been a police officer for 15 years.

37 years of age has the commander.

There are currently 800 police officers in Mazatlan.

300 policewomen are part of the SSPM of Mazatlán.

Operational Deputy Director of the Municipal Police of Mazatlan

” This work is not easy, since you practically have to leave your family alone, especially the children, who are the ones who depend on you as a mother. But it is an activity that makes me very proud.”

Playa Pinitos is one step away from losing its certification

Mazatlán and company had a tourist “good end”