The Mazatlan Chef Melissa Zapata reveals that this ingredient, in addition to the good taste, leaves a smoother texture in the bread

Mazatlán, Sinaloa.- The bread of the dead is a traditional food of Mexican cuisine and is associated with the celebration of the Day of the Dead, it is also an offering to the deceased that are placed on altars.

However, the origin of the bread of the dead comes from pre-Hispanic times, its tradition was part of human sacrifices and over the years it has evolved to take the form with which it is known today.

This bread has a strong meaning because before it was used for human sacrifices, it was not itself bread, but the heart of a maiden or princess was taken and it was offered to the Gods, after the arrival of the Spanish, they prohibited the sacrifices and bread was chosen to replace a beating heart, “ said chef Melissa Zapata, from Dulces Sueños Pastry and Events.

Although circular-shaped bread is possibly the most traditional, there are a variety of shapes and flavors depending on the state or region.

“The round shape refers to the cycle of life, the bones are the cardinal points, but it is also said that they are shed tears and the center is the skull,” he explained.

The Mazatlan chef mentions that the flavor of orange blossom and anise is the most traditional and one of the most common in Mexico City and states such as Oaxaca and Puebla, but here in Mazatlán, the orange flavor is widely used, although it can also be made from chocolate, coconut, coffee, and vanilla.

“What this bread has, which makes it different from others, is butter, it has more butter than other breeds and therefore it is softer and more humid, ” he added.

Historians have revealed that the making of the bread of the dead began in the 18th century; Over the years, they went from traditional bread with few ingredients to include different flavors, colors, shapes, and even filling.

” Everything is mixed, we make a pre-mix in the blender and as it is a heavy dough we knead it by hand for half an hour and after that, it is left to rest for 30 minutes. The balls are formed, the bones are put in and it is left to rest another half hour. It gets to bake between 25 to 30 minutes “, detailed.

In the end, it is sprinkled with sugar and filled if you prefer.

Although it is a food that is used to eat next and during the celebration of the Day of the Dead, Melissa has sold rolls since the beginning of September and will continue throughout November.

“The sale is very even, many young people ask me for fillings (with Nutella, chantilly pastry cream, cajeta, cookies, strawberry, apple) and older people want them natural, they can even be made whole for diabetics” he added.

She is 26 years old and has a history of 11 years in the world of confectionery; She has participated in the cooking section of local television programs and is a teacher at the Tecmilenio University, in addition to uploading recipe content to her YouTube channel. 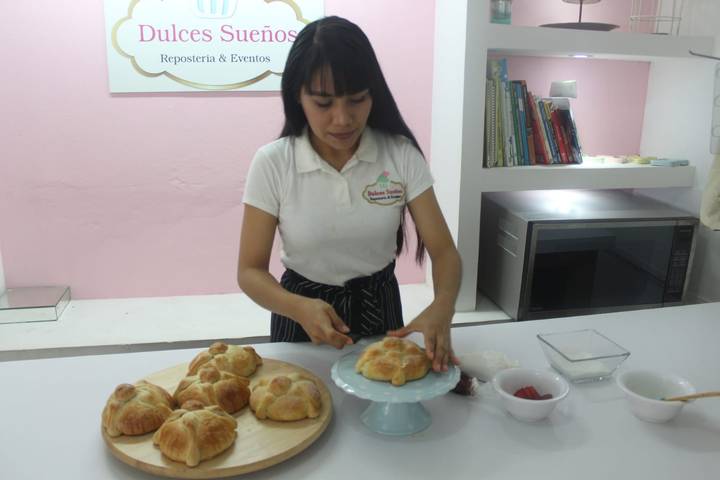