With the entry into power of López Obrador, the reading of politics moves to the universe of symbols. The next occupant of the National Palace conceives the policy according to the canons of the old guard, therefore, the compass in the analysis moves towards those political coordinates. In that sense, during the visit to Mazatlan, there were several things to review: What actors of political weight would attend? In what position would you place them? Who would be the speakers at the event? And above all, would the tabasqueño mention any particular actor during his speech? The first questions have to do with the framework of the Sinaloan policy -and the specific Mazatlan one-. The last question has to do with the political coordinates of López Obrador.

As for the first, the following should be noted: the irruption of a new political class in Mazatlan and the state as a whole is evident. This visit by López Obrador gave way to the place of the new political actors in the state. Through the corridors that were set up in the Olas Altas Avenue – due to the fence that was put in to divide the different invited citizens – it was possible to observe the Federal Deputies Olegaria Carrasco and Maximiliano Ruiz; to the Local Deputies, Tony Crespo and Mario González Sánchez; Senators Rubén Rocha Moya and Imelda Castro; and the presidents of Culiacán and Mazatlán, Jesús Estrada Ferreiro and the chemist Benítez Torres; as well as the next Coordinator of the federal programs for the state of Sinaloa, José Jaime Montes, and the next National Fisheries Commissioner, Raúl Elenes. All these actors are part of the new political class that burst onto the scene after the results of July 1. Some of them were addressed by the media, while greeting some of those present. They are the new power in the state and so they were observed.

On the other hand, the event gave way to observe another power on stage: entrepreneurs. And I do not mean smaller businessmen, but too important entrepreneurs in the port and in the state. There they were in the first row. Which is a signal in two senses: not even Morena has a problem to interact with the economic power, nor is the latter has any qualms in helping the new government. The economy and politics have to continue regardless of who is the party that occupies power.

There is a third group of political actors who met, and I refer to actors who, without being in Morena, contribute to its purposes and for that reason are close to joining their ranks in specific political projects, such as the case of Deputy Roberto ” The güero “Cruz. We will deal with this later in an article.

But in the case of this writing, we are interested in focusing on the figure of the Chemist Benítez Torres. The visit of López Obrador would empower the elected Mayor of Mazatlan and we were not wrong. And the empowerment is presented-speaking of the symbols in three moments: 1) Each one of the guest actors -of importance entered through a path where he had to run into the Chemist Benítez Torres. This occupied a strategic place to receive the guests and with that fact he noted that the event was his and his team’s. No one else’s. 2) It will be possible to criticize the presence of the businessmen -significant- and the place where they were placed -in the front row-, but this is political, and both the Chemist and the Brunette are doing politics and need to stay in the political space for a considerable time, so more than criticizing the presence of invited entrepreneurs, it should be noted the presence of these in an event where before it was almost impossible to happen. It will be possible to be objected that they went by to visit Lopez Obrador and is correct; but in AMLO speech took place a fact stands out -and here is located the third element-: of all the political actors that were in the pavilion, the only one he showered with gratitude and support was the Chemist Benítez Torres. “We’re going to support him,” says AMLO. And that discursive piece has a double political meaning: it has to do with political support for the municipal administration of the Chemist; but also with another more important element: the road to Obrador is the Chemist Benítez Torres. It is observed that AMLO sees him well and has respect for him because he has accompanied him during all this time of political struggle. A requirement that does not cover the now senator Rubén Rocha Moya, for example. That is why we have dared to affirm that the Chemist Benítez Torres could become a relevant actor in the coming years. He had the strength to stay in Morena when there was no possibility of coming to power, and now that circumstances favored the party, Lopez Obrador is recognized him in an event that presents nothing more and nothing less than the political leadership of Morena in Sinaloa and an important part of the business leadership of Mazatlan. 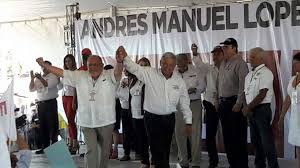 Thus, the visit of López Obrador fulfills the political purposes for which the event was constituted. On the side of the AMLO, gratitude is expressed to the Mazatlecos – and Sinaloa as a whole – for the support received on July 1. At the same time, an agenda of projects to be carried out in the state is presented. And on the side of the Chemist Benítez Torres, the President-Elect visit empowers his position both internally and externally.

To such a degree that … he becomes one of the most visible actors of Morena in the state along with the now Senator Rubén Rocha Moya. The advantage of the latter is that he has federal and state support and room for maneuver, but the Chemist has the respect and support of the future President of Mexico.

Orlene is now a hurricane, seek shelter if needed