Specialist assures that an alternative must be sought in the face of the negative impacts generated on the environment by visitors who have practically taken over the city this summer.

At the age of 18, Juan Jaquez embarked on the adventure of traveling throughout Mexico, he no longer wanted to see the most impressive landscapes, beaches, and places in the country through a television screen, he wanted to be there, live the experience first hand; At 28 years old, the young man from Gómez Palacio, Durango, has traveled to numerous beach destinations and magical towns throughout the Mexican Republic, he likes to learn about the customs and traditions of the places, rest, relax, enjoy and connect with nature because he is also an Ecologist by profession.

He has come to Mazatlan on several occasions and has witnessed the evolution that the port has had in recent years, but he has also become aware of the problems of pollution, poor management and treatment of wastewater and garbage that exist, and above all, from the tourist saturation that the city presents, which has intensified this 2022.

“ As a visitor, I see very little offer of alternative tourism, something that is not limited only to the beach, sun and sand. In other destinations, they do bet more on attractions such as hiking, biking, runners in forests, among other things”, he said.

He assures that Mazatlan must seek an alternative to the negative impacts generated on the environment by visitors who have practically taken over the city this summer.

“ The beaches are the best attraction in Mazatlan, but there are also tourists who, in addition to looking for the sea, want to carry out other types of activities that are more friendly to the environment; the port has the potential to give that extra, since it has important natural sands. It is time to start exploiting them .” The port has the potential to give that extra, as it has important natural sands.

IMPACT ON THE ENVIRONMENT

This over-density of visitors, although beneficial economically, impacts natural resources, socially and culturally, so all those involved must be forced to rethink the way in which this economic activity is carried out.

For this summer it is expected to have 677 thousand visitors in the port, a figure that can increase up to 20% and that alerts the doctor in Environment and Development, Blanca Roldán, who assured that it is urgent that Mazatlan have alternative tourism, compatible with the environment and at the same time generate income and jobs for a local population.

“Sustainable tourism is one that must be maintained taking into account current and future repercussions, without affecting communities, local citizens and natural resources. The characteristics of this type of tourism is the respect for the environment, which is carried out in natural areas with minimal impact, while creating environmental awareness with visitors; there are guidelines for both service providers and tourists, ”he explained.

He added that it is very difficult to find real ecotourism, because sometimes, even though the activity takes place in a natural area, it is also often overcrowded, exceeding the carrying capacity of the system, while real ecotourism is focused on very specific groups, controlled according to the load capacity. 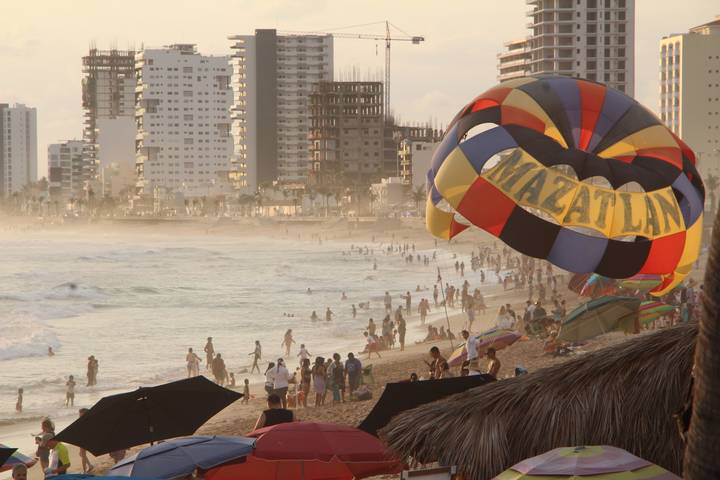 ” Sustainable tourism has to be related to the local context, with its culture, its flora and fauna; to have an experience with natural resources in a respectful way, because it wants tranquility and wants to learn about flora and fauna,” he added.

In this sense, tour guides play an important role, they must not only have the function of managing the group but also of telling tourists what they can and cannot do.

WHAT KIND OF TOURISM COMES TO THE PORT?

After the economic reopening, after the social confinement due to Covid-19 in 2020, the port has witnessed a significant tourist overcrowding, there have even been periods where the floating population is greater than the local population.

Only in Easter 2022, the city received about 800 thousand visitors, surpassing the local population, which is approximately 500 thousand inhabitants, according to the INEGI census carried out in 2020.

Roldán assured that the tourism that arrives at the port is, mainly, a tourist looking for the beach, consuming alcohol and listening to banda music.

“Tourism is mostly national, with a not so high level of training, although that does not mean that they do not have a certain status of purchasing power, but rather it is a matter of education, of wanting to contribute something to the world, “ he said.

“He is mostly a messy tourist. The disorder of it is arranged by tour operators before the permissiveness of the authorities since there are not enough mechanisms to order the bad practices of the visitors or those of the service providers.

He added that tourists also have an important role, since it is not only the task of operators and hoteliers since if they do not demand other alternatives in the activity, few will bet on it.

“Education, environmental awareness, political and business will is required, but it is not easy. The business objectives in the field of tourism are to have economic profits and offer the quality that according to them is the product they are offering. The quality also depends a lot on what tourist audience you are offering it to.”

He stressed that tourism is good for Mazatlan, due to the economic benefits it leaves behind since 70% of its economy depends on this tertiary sector, but that overcrowding has wreaked havoc, both for the local population and for the visitors themselves.

“In Mazatlan, there are practically vacations all year round… you have to queue for about two hours to have a comfortable breakfast in a restaurant because everything is saturated, fortunately,” was the speech of the mayor of Mazatlan, Luis Guillermo Benítez Torres, at an event public on Tuesday, August 2.

However, this saturation of tourism is only measured from the economic point of view, the spillage it leaves, and the jobs it generates, but what impact does it generate on the environment, its natural resources, and even in the social sphere?

“ The problem, at the contamination level, there is no doubt that it is increasing; this is present in its different types, the most common, or the one that the citizen has more perception of, is that generated by urban solid waste, especially in the coastal strip and public places, ”he explained. There is also the acoustics, the noise disturbance.

“There is also acoustics, noise disturbance, both in people and in animals; In general and mostly, it comes from sources such as public transport, clubs and bars, but also from activities derived from construction for tourism development. In addition to the visual, since the construction of towering towers not only breaks with the harmony of the landscape, but has also taken away the right of some neighbors to have a view of the sea ”.

Population growth and tourism development have generated greater environmental pressure that has brought new forms of occupation and use of natural resources. The real estate developments remove all the native vegetation, flatten the land, start putting grass and four palm trees or exotic trees, invasive species and then all the lots for the houses.

” This type of urban development is unsustainable, not only for the environment but for the residents, because the green areas that they are creating cannot be used. In Mazatlan there is a saturation of avenues, lack of infrastructure and road education, even in mobility issues, the bike paths are poorly thought out, being built on medians, they are not functional for transportation or for recreation ”.

VISION FOR THE FUTURE

After touring the streets of Mazatlán, enjoying its gastronomy and its tourist attractions, the adventurer Juan Jaquez hopes that the next time he visits the port, progress has already been made towards sustainable tourism, that the authorities get involved, that visitors respect the regulations and official provisions, that they know the attractions in a friendly way with nature and that in a natural space, the only traces left behind are their footsteps.

-677 thousand visitors are expected to have in Mazatlan during the summer (July and August).

-13 new hotels are currently being built.