“They should not be here in Tijuana,” one upset resident told Mexican authorities.

TIJUANA, Mexico — The Trump admin. does not want the caravan of Central American migrants to enter the U.S. But members of the caravan are also facing a growing backlash in Mexico, according to a new survey.

A poll released Sunday by El Universal, one of Mexico’s biggest newspapers, found seven in 10 Mexicans have a negative view about the arrival of the migrant families, with more than half — 52 percent — supporting blocking them from entering the country without legal documents and 55 percent supporting tougher measures on future caravans.

Support for the migrant families has also dropped in the last few months, the survey found. This has implications for President-elect Andrés Manuel López Obrador, who takes office on Dec. 1: About half, 52 percent, of Mexicans, opposed his announced measure to give work visas to Central American migrants, while 40 percent support the measure.

Mexicans who live in the Tijuana-San Diego border area near the San Ysidro Port of Entry — one of the busiest legal border-crossing sites in the world — are feeling the effects of the standoff between U.S. authorities and the Central American migrants hoping to cross into the U.S. and seek asylum.

On Monday, schools near the border were shut down. A mother taking her children to school told NBC News that “they’re shutting the school today for the children’s safety.” 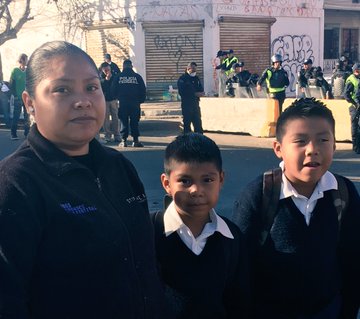 And surrounding schools have been shut down – all the kids have been sent home. This Mom saying when she went to drop her kids off they told her they’re shutting the school today for the children’s safety #MigrantCaravan

On Sunday, the border was shut down for five hours after an altercation between U.S. authorities and members of the migrant caravan who were trying to cross the border.

For more than 6 million people living in the San Diego-Tijuana border, which moves a $220 billion economy between the U.S. and Mexico, the San Ysidro Port of Entry is crucial in their lives.

Over 25 million vehicles containing roughly 48 million passengers and more than 16 million pedestrians go between the U.S. and Mexico to go to work and school, according to the U.S. Department of Transportation.

After the shutdown, some Tijuana residents and business owners came out with bats and sticks and threatened the migrants.

“They should not be here in Tijuana,” an upset resident told Mexican authorities. 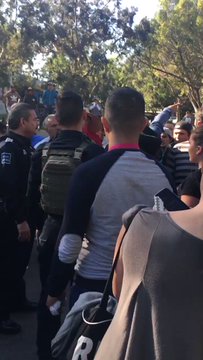 Some in Mexico are feeling more conflicted — knowing that the migrants need help, but fearing that the rise in tensions will get worse.

“I would like to support them in any way I can, but the reality is that what’s happening now is harming us because there’s violence, ” a Tijuana resident told DW en Español.

Mexico’s economy secretary, Ildefonso Guajardo Villarreal, told MSNBC that “there has been a tremendous effort in Mexico by the business community and the authorities to offer alternatives to migrants, even to take temporary jobs in Mexico.”

Villarreal added that while crossing the U.S.-Mexico border gives migrants a temporary solution, “definite or permanent crossing of the border is an impossible solution because it will damage jobs in the U.S. and in Mexico.”

Over the past week, the fury of some Mexican residents who disapprove of the migrant caravans was unleashed on social media after a video that showed Honduran migrant Miriam Celaya expressing her discomfort with the food being provided at the migrant shelter giving her and her two daughters went viral.

Even though Celaya apologized for her remarks, people in Mexico used the clip to stir anti-migrant sentiment and harass Celaya. Since the backlash, Celaya told DW en Español she made it safely to the Otay Port of Entry in Arizona.

On Sunday, some migrants said they tried to cross into the U.S. after being denied access to the port of entry in San Ysidro where they could claim asylum. Customs and Border Protection responded by using tear gas and pepper spray after several migrants allegedly threw rocks at border agents.

Mexico’s Interior Ministry claims they’re trying to identify 500 migrants suspected of having been involved in Sunday’s altercation to apprehend them and deport them.

On Monday, over 100 Mexican federal authorities with riot gear surrounded the Benito Juarez shelter, the largest in Tijuana where the majority of the migrants who were present on Sunday’s border brawl are staying, to identify the 500 migrants they seek.

President Donald Trump tweeted Monday that Mexican officials should send most of the migrants seeking entry into the U.S. back to Guatemala, Honduras, and other Central American countries by airplane, bus or “anyway you want.” He also threatened to shut down the U.S. southern border “permanently” if needed.

Since Oct. 19, Mexican authorities have deported nearly 2,000 Central American migrants who were part of the various caravans that have taken place during the past months. A total of 11,000 migrants who had no legal immigration status in Mexico have been deported back to countries in Central America, according to a report from The National Institute of Migration, a gubernatorial unit that controls and supervises migration in Mexico.

The migrants are being returned to countries facing the highest levels of violence worldwide. The countries of the Northern Triangle of Central America — El Salvador, Guatemala, and Honduras — have murder rates that are three to eight times higher than what the World Health Organization considers to be epidemic levels, according to Amnesty International.

Mayan Train, among the 100 most important works in North America says study