The General Assembly of the Trade Union Association of Aviator Pilots of Mexico explained that among its demands is the review of the performance of Crewmember Traveling in Cabin, which was suspended.

By unanimous decision, the General Assembly of the Association of Aviator Pilots of Mexico agreed on Tuesday to strike the Aerovías de México company for the first minute of October 1 for violations of the collective bargaining agreement.

The Association indicated that the administration of Aeromexico decided unilaterally to suspend the provision of Crew Traveling in Cabin, among other violations of the collective contract. 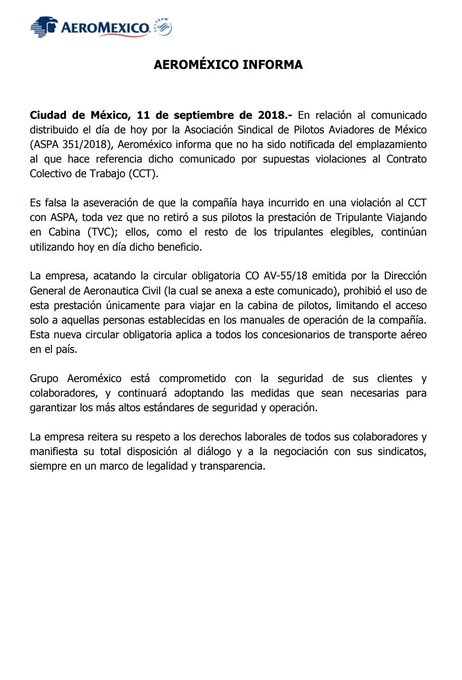 In a statement, he informed that it is a necessary clause for around 2,400 pilots who fully comply at all times and with the labor and aeronautical regulations.

“This benefit is used by aviator pilots to move from their place of residence to their work base and use it in most of the world’s airlines,” he said.

ASPA clarified that the strike location is not related to the dismissal of the pilots involved in the accident at the Durango International Airport , but because of contract violations.

“The airline dismissed the pilots involved from the preliminary report issued by the General Directorate of Civil Aviation in relation to the accident at the Durango airport, in which a non-contributory finding of the aforementioned event was detected, but contrary to the rules and regulations. procedures in the flight operation, “he said.

ASPA stated that “in no way” supports conduct that violates the aeronautical regulations, so once the final opinion is published, it will be added to the recommendations of the Investigative Commission to continue building a safe aviation for the benefit of the user public.

“The general assembly agreed to strike Aeromexico in protest at the unilateral decision of its administration to give for canceled contractual benefits at a time unfavorable for it by virtue of both parties being in an important comprehensive review of the collective contract governing their relationship labor, “the union said.

ASPA and Aeromexico signed on September 24, 2014 a contractual and multi-year salary agreement for 4 years, so during that period the company granted the pilots a wage increase equivalent to inflation plus one percentage point for each year, it will be up to this 2018 when this multi-year contract is revised again.

Sinaloa has everything that Europeans are looking for, assures Secretary of Tourism